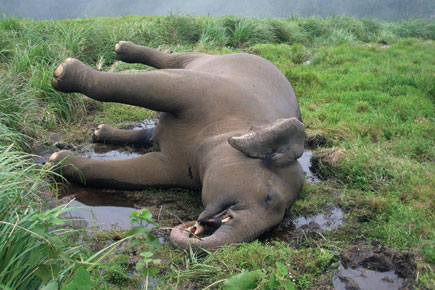 
The coming of the monsoon has proved tragic for a family of four wild elephants in Kerala. On 17 August, the four— a tusker, a female elephant and a couple of calves, male and female—died of a lightning strike in Gudrickal range of the Ranni forest division. Forest officials assume the elephants were walking along a hill when they got electrocuted and their bodies rolled down the valley. The next day, a forest watcher on routine patrol duty spotted the corpses from an adjacent hilltop.

This is the second time in a decade that lightning has claimed the lives of wild elephants. In 2000, four elephants had died in the same area.

Man-made disasters are also not unknown. In 2004, five elephants died of electric shock from a high extension line passing through the forest. Four were killed in 2001. “We have often asked the Electricity Board to tighten the lines. Increasing the height of high-voltage electricity lines is another solution,” says a forest officer.

Wild elephants are also facing the threat of displacement due to human encroachment of forests. “The changing pattern of cultivation is another reason for elephants coming out of the forest,” says NK Sasidharan, Chief Conservator of Forests, Palakkadu. “For instance, in Palakkadu district, farmers have largely turned to the cultivation of banana trees,” he adds. Elephants are attracted to paddy as well. Around 34 people have been killed by wild elephants across Palakkadu and Malappuram districts in the past four years.

Local farmers, though, have a different version. They say elephants are entering human habitations because of the presence of poachers and marijuana cultivators inside the forest. Authorities refute this, saying that if this were so, other wild animals would have been coming out too. “That is not happening,” insists a range officer in Palakkadu division.

Along the Tamil Nadu-Kerala border, trains too are proving lethal for wild elephants. “Around 28 km from Kanchikkodu to Valayar of the  Coimbatore-Palakkadu track goes through the forest. Twelve wild elephants have died after being hit by trains since 2000,” says Sasidharan.