With no Armenians left in Chennai, an Anglo-Indian takes care of this community’s historic 298-year-old church. 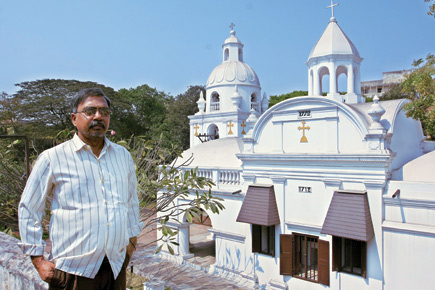 With no Armenians left in Chennai, an Anglo-Indian takes care of this community’s historic 298-year-old church.


Till six years ago, Michael Stephen was caretaker of the 298-year-old Armenian Church, said to be one of the oldest centres of Christian worship in South India. Then the priest decided to turn infotech professional and left for Bangalore to work in a call centre, and with him went the last of the Armenians, once a sizeable community in the Tamil Nadu capital.

With no one to safekeep the ancient church, the community—there are 275 registered Armenians in India—contemplated bringing in priests from Armenia but the idea was dropped because of the language barrier. That was when the Kolkata-based Armenian Association approached 53-year-old Trevor Alexander, an Anglo-Indian, to be the caretaker. Now Trevor, his wife Loraine and daughter Rebecca live in the church compound, looking after the monument and its rare holy utensils.

Trevor feels there’s nothing strange about a Roman Catholic single-handedly handling the affairs of a church of a different congregation. Every morning, he ensures the church walls are dusted and the altar is cleaned. He also lights candles for the 350-odd Armenians, whose tombs are around the chapel. Every Sunday, Trevor rings all the six church bells at 9.30 am, a tradition that has continued for over 250 years.

Armenian globetrotters come occasionally to the church to kneel before Virgin Mary, in whose name it was built, and offer prayers. Trevor takes such visitors to the Armenian cemetery near Central Railway Station, to Arthoon Road in Royapuram that is named after an Armenian, to the Santhome church where two Armenian tombs are present and other city churches with Armenian ties.

“Only last week, a young visitor from the US told me the Arthoon Road was named after her great grandfather. There are several such Armenians from across the world who come here in search of their roots. Taking them around is also part of my duty,’’ says Trevor.

He says the Chennai church is an integral part of Armenian Christianity worldwide. “Rev Haruthian Shmavonian, editor of the first Armenian journal Azdarar, died in Chennai two centuries ago, and his tomb is in the church complex.  He has a saintly status among Armenians all over the world and most of them visit the church whenever they are in India,’’ he says. Tamil Nadu Tourism recently included the church in the list of places with historic value, and so domestic tourists also visit the place on most days.

The Armenian Association, which is planning to celebrate the 300th year of the church in 2012, is not ready to hand it over to any external agency like the Archeological Survey of India. They are happy with Trevor’s caretaking.