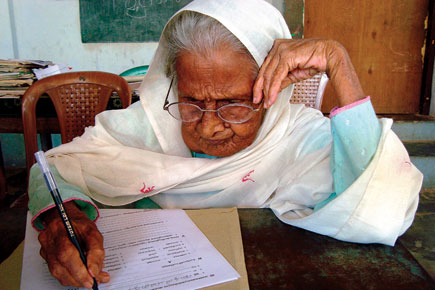 
On 28 April, Fatima Beevi of Alappuzha district in Kerala got up earlier than usual. Her teacher came at 9.30 am, and both then left for a nearby school. There, over four hours, she answered questions on Malayalam, arithmetics and basic social sciences. All this wouldn’t have been very unusual if Fatima Beevi was not 90 years old.

The exam is conducted by Kerala’s State Literacy Mission, and the one she was taking was the Class IV equivalent. She is looking forward to a good result by the end of the month.

The idea of taking the exam came to her in December last year. Literacy workers were conducting a home-to-home survey when they chanced upon her. “She told us she was deeply interested in learning,” says Abdul Samad, Alappuzha district coordinator of Kerala State Literacy Mission. The literacy programme’s objective is to ensure primary education for everyone. It is conducted for those who had to give up their studies or dropped out early from school. Only those between 15 and 50 years are eligible, but for Fatima, the age rule was relaxed as a special case. “Her classes started in January. She worked very hard for the past four months,” says Sheeba Thajudeen, a literacy mission instructor who taught Fatima Beevi. “We were amazed to see her eagerness to learn.”

Fatima Beevi comes from a time and family where women never had a shot at education.  “We were living in abject poverty. At that time, sending children to school was not a priority,” she says. At 28, she got married. When her husband died 14 years later, there were three young children to take care of.  She could

not send her elder son to school beyond Class VIII. “I was only 12 when our father died,” says Abdul Hameed, Fatima Beevi’s elder son. “She used to make delicious snacks and we decided to make a living of it.” Her two younger daughters dropped out after Class IV. “I am still sad about not educating my children,” she says.

In May 2012, the Literacy mission will conduct the Class VII examination for those who clear Class IV. Fatima plans to take it. ‘“If God permits,” she says.