Revenge of the Rooster

The story of a murderer on the run 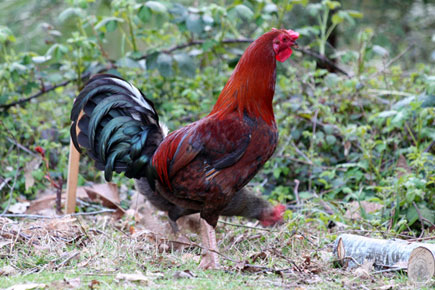 The story of a murderer on the run


After Singrai Soren bought a rooster at a village fair four months ago, he fed it supplements and trained it to fight. He then took the bird to Mohanpur village in West Bengal’s West Midnapore district which hosts cock-fights. Soren’s rooster soon built a reputation of sorts by winning four fights and killing his opponents.

The winning spree was still on a week ago when the rooster won the first fight of the day but with minor injuries. The usual practice is to give a rooster at least an hour’s rest between fights. Most masters are also satisfied with one win in a day, since the reward—prize money of Rs 2,000 and a dead opponent to feast on—is substantial. Soren, however, wanted his rooster to go into the ring for a second fight within a few minutes of the win. That’s when the rooster began to complain.

According to Soren’s friend Dasai, the rooster tried to get away from the ring a few times, but Soren tried to push the rooster into the ring repeatedly. The rooster turned back and attacked Soren, cackling and flapping its wings. The razor blades attached to the rooster’s legs—a usual practice since that’s how roosters kill and injure opponents in cock-fights—sliced Soren’s jugular. He slumped on the ground. The rooster fled.

No one noticed Soren had been injured and it was only when blood flowing from his ruptured vein started soaking his white shirt did his friends rush him to the Binpur primary health centre. It was too late. Soren was dead.

A post-mortem confirmed that Soren had bled to death. The police have registered a case against ‘an unknown rooster with red and black feathers’ and notified surrounding villages. But even after six days, no one has seen the ‘dangerous rooster’. Police suspect that the rooster, being a champion fighter, may be being kept captive by someone who wants to make it participate in cock-fights later. The plan is to keep a watch on future cock-fights and arrest the killer rooster if found.

And what after the ‘arrest’? “We’ll detach the blades and then decide what to do,” says an officer at Binpur police station. But with a large number of roosters matching the description of Soren’s murderer, it is going to be tough for the cops. Also, it is hoped, the new master will treat it better than Soren did.