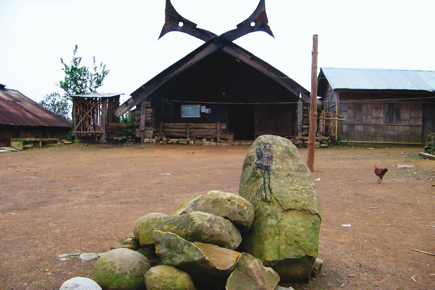 
An age-old custom in Nagaland of punishing criminals by putting them in small cages whose bars are smeared with an itchy paste is getting attention from human rights activists. The cages, made of bamboo or wooden bars, are just big enough for a human to fit it and crouch on the base. Touching the bars triggers a severe spasm of itching that can even land one in hospital.

The sentence is meted out by traditional village councils, and criminals get varying terms, ranging for a few hours to a couple of weeks, depending on the gravity of their crime. The form of punishment is practised in most villages all over Nagaland but is especially prevalent in areas inhabited by the Ao tribe, like the state’s northern district of Mokokchung.

A number of human and civil rights bodies have petitioned the state human rights commission and Chief Minister Neiphiu Rio to stop this practice. “Such punishments handed out by kangaroo courts have no place in the country’s legal and democratic setup. It is the exclusive prerogative of the Judiciary to punish convicts who are tried under the due process of law,” says Z Sumi, a human rights campaigner.

Traditionalists reject the criticism. “This system is much more effective in curbing crime than the legal system,” argues N Bendang Ao, a former bureaucrat. “Justice is fast. Criminals are more scared of being put in such a cage than in a police lockup or real jail. Not only is it extremely uncomfortable, but the stigma of being caged like this in the village square in front of everyone is a severe deterrent. There are innumerable instances of criminals having reformed after being caged like this.”

To many like him, the traditional form of justice is also fair. “Since it is the village council that adjudicates cases and everyone’s opinion is taken into consideration before a unanimous decision is taken by the village council, there is no chance of miscarriage of justice,” says L Jamir, a politician. He says traditional bodies have been granted protection under the Sixth Schedule of the Constitution.

The state government is wary of banning this practice because it would anger powerful tribal chiefs. Meanwhile, rights activists are planning to approach higher courts to enforce the ban.