A self-described medical palmist reads between the lines 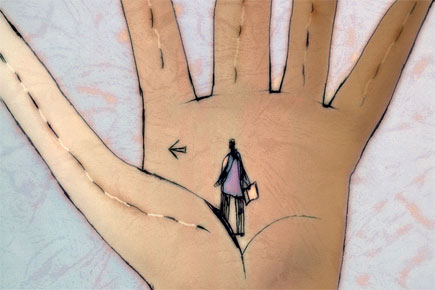 A self-described medical palmist reads between the lines


It’s hard to tell what’s more mystifying about self-described (and self-taught) medical palmist S Vijayakumar: that he has subsisted on this unlikely profession for 28 years, or that, in this time, the owners of about 63,000 palms (his estimate) have actually paid to know the relatively obvious and the patently unpleasant—that they will, one day, grow weak and die.

Whatever the explanation might be, for the past seven years, Vijayakumar has been “on-call” as a medical palmist at two luxury hotels in Chennai: the Sheraton Park and Taj Coromandel. There, he built up a steady—and steadily hypochondriacal—clientele of mostly Japanese tourists and German airline stewards. Vijayakumar, who charges Rs 5,000 for a “detailed study”, Rs 10,000 for a “micro-study” and Rs 20,000 for a blow-by-blow account of bodily degeneration for the two decades to come, says he detects broad trends across clients from different countries. “Germany, common [problems] are skin-related issues and obesity,” he says. “Japan, basically they have nerve-related troubles. The restlessness is very much there. India, thanks to spicy food, the main problem is stomach. Americans have stress-related problems, like fatigue and high BP and uric acid because of rich food. And [among] Chinese people, the main thing is bilious. Liver-related. Also, insomnia.”

Vijayakumar claims to be aided in his divination by “psychic powers”—“rare kinds of flashes in my mind”. He adds, “When I wear a white shirt, my psychic levels are especially high.” He also undertakes on-site research at the rare hospital that indulges him. “I spent some time in the ICU of the Trinity Acute Care Hospital (in Chennai), examining heart, liver, kidney and stroke cases,” he says. “I can now detect more than 20 ailments from the nails alone.”

Medical palmistry has many critics, the most professional among them being Sanal Edamaruku, president of the Indian Rationalist Association: “A wrong diagnosis based on pseudo-scientific claims can cause serious damage to gullible victims.”

Vijayakumar, for his part, maintains that his “90 per cent plus” success rate has earned him many fans, including the Trinity Care medical director, whose sugar levels he cautioned him about.