In Pursuit of a Slim Silhouette

‘Weight loss’ is the mantra of middle-aged Indian politicians 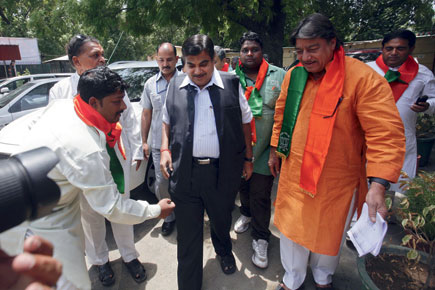 ‘Weight loss’ is the mantra of middle-aged Indian politicians


The late Vilasrao Deshmukh, not so long ago the Chief Minister of Maharashtra, had a favourite peeve—his bulging waistline. About a decade ago, a health scare saw him seek help to cut away the unwelcome inches through nutritionist Anjali Mukherjee. Deshmukh’s trimmer shape got him many followers among his Cabinet colleagues. In a way, it was a Maharashtra politician’s introduction to the benefits of a slim silhouette.

Cutting across party lines, heavyweights became lightweights, or at least tried. They are doing it for the sake of their health as well as for vanity. The most visible loss of flab can be seen on the BJP trio—Nitin Gadkari, Vinod Tawade and Devendra Fadanvis—who weighed over 100 kg each at one point.

Fadanvis, an MLA from Nagpur, would find it difficult to walk even short distances and tired easily. His weight was 110 kg. Then he had weight loss surgery. When he walked into the Maharashtra Legislative Assembly, 40 kg lighter, there was stunned silence. The strict diet continues.

MLC Vinod Tawade loved his food and it showed. The kilos piled on unchecked. But as he rose in the ranks, Tawade felt that he needed to lose weight to be taken seriously by his constituents. He sought an appointment with weight loss guru Dr Sarita Davare and embarked on a diet and exercise regimen. Well into his programme, Tawade had once remarked that he was surprised at his ability to stick to the diet. “I had never imagined that brown bread could be a good friend,” he said. Shopping for regular sized clothes instead of plus sizes added a new dimension to his life. Tawade says his lost kilos are a conversation starter and has helped forge new ties because “someone or the other always seems to be on a weight loss programme.” Once 105 kg, Tawade now weighs about 75 kg.

BJP national president Nitin Gadkari’s (relatively) slimmer look has been a talking point in political circles. Like Tawade, Gadkari too is a foodie, just a more incorrigible one. “I like to eat and do not know how to compromise on that,” he laughs. A diabetic, his sugar levels got worse, prompting Gadkari to undergo surgery. He lost some 30 kg and now weighs about 85 kg. Unlike Fadanvis and Tawade, however, his slimline version has a shaky future as he simply cannot give up sweets.