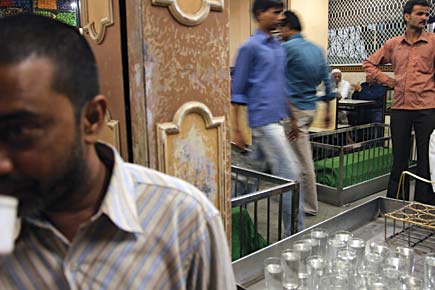 
The restaurant serves a delectable bun butter and tea, but that’s not the only reason why people flock there. Set up 60 years ago, the unique selling point of this eatery, a popular attraction of Ahmedabad city, is that it’s bang in the middle of a graveyard.

Eighteen graves covered with green velvet shrouds are scattered around the restaurant, with the furniture adjusted to accommodate them. Patrons are allowed to touch the graves but have to keep their feet off, which can be difficult. The aluminium benches are raised high, leaving the feet swinging close to the graves. Over a century old, the graves belong to unknown plague victims. They are tended to with care by the owners and bedecked with garlands. Incense sticks are continuously lit at their head and the aroma of strong perfume swirls inside the restaurant.

The graveyard came first. According to local lore, when Ahmedabad was hit by the plague, one Syed Saheb Qadri, popularly known as Pir Baba, let the poor bury their dead on this barren land which he owned. Currently, the café is owned by Ramrai Shetty. Six decades ago, one of his family had been scouting for land to set up a small restaurant. He approached Pir Baba’s descendants. They agreed on condition that the graves not be disturbed. A modest tea stall was set up. The graves were on the periphery then. As customers increased, the tea stall grew into an eatery. Soon the Shetty family bought over the graveyard and the graves became a natural part of their décor. Providentially for the Shettys, it also became a tourist attraction of sorts. “Since it was a very unusual place, more people started visiting the café. My family believes that the graves have been lucky for us,” says Shetty.

Seventy-year-old Mohammed Azam Mansuri has been a regular at the café for 45 years. “I have been coming here since 1956, when I was in college. The tea here is the best I have ever had. We were hooked to the place due to its unusual setting. I come here daily at 10.30 in the night to meet my friends. We usually chat around for an hour or so,” says the textile businessman.

His friends are Mohammed Safi Mansuri (60) and Ajibhai Mansuri (74), both of whom have been regular café visitors for 15 and 25 years respectively. “Graveyards are supposed to be haunted by ghosts and bad energies. In all my years as a patron here, I have never experienced anything negative. In fact, coming here has helped me get over my fear of ghosts and graveyards,” says Ajibhai.

According to them, MF Husain, the artist, used to often visit the café. On the orange and green coloured wall, there is a solitary decoration, a painting with inscriptions from the Quran. “It’s by Husain,” says Mansuri.