They have names like Jesus Christ, Elephant Tamer and Newly-Wed Woman. 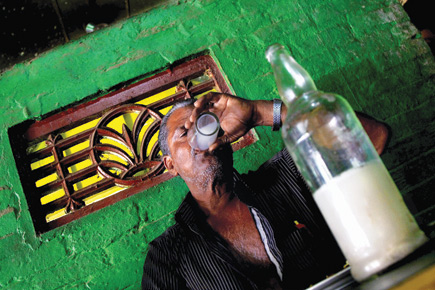 They have names like Jesus Christ, Elephant Tamer and Newly-Wed Woman.


To name a bottle of booze after Jesus Christ may sound strange anywhere in the world. But in Kerala, which consumes the most alcohol in this country, it’s because the stuff is so strong that if you drink it, resurrection occurs after three days.

There’s more. Aaanamayakki in Malayalam means elephant tamer. “Half a bottle of Aaanamayakki is enough to tame a well-built man,’’ says a liquor supplier.  Manavatti, on the other hand, is mild, true to its meaning—newly-wed woman. “Like her, you will have a shyness on your face after you drink it,” he says.

In south Kerala, toddy shops use medical terms to describe their facilities. “ICU is a room with restricted entry, where beginners can drink without the fear of unexpected relatives entering. Mortuary is for those who drink themselves into a stupor,’’ says Thomas Chacko, employee of a Kollam toddy shop.

But beyond the mild amusement of such innovative nomenclature, a serious problem is brewing. All these spurious liquors are a mix of adulterated toddy, a number of chemicals and cheap country arrack. They started being offered in toddy shops after the state banned the manufacture and sale of arrack 15 years ago. “Only 2,000 coconut trees are being tapped in Thiruvananthapuram district everyday and they generate a maximum of 3,000 litres of toddy. But the demand is many times more and met with the spurious toddy,’’ says a toddy parlour’s manager.

Not long ago, Rishiraj Singh, an honest IPS officer, initiated raids on toddy shops across the state. About 300 toddy parlours selling illicit spirits were sealed off. But he was soon transferred to New Delhi.

Peasant leader AC Varkey blames the problem squarely on Kerala’s  Abkari Act. “A coconut grower has no right to tap any of his coconut trees for sale or self consumption. Only shop contractors and their employees have that right,” he points out.

Some time ago, scientists at Kerala Agricultural University developed a sweet toddy-based, non-alcoholic drink as a cola substitute. But no effort has been made to translate it into a commercially viable industrial project. Until then, Kerala makes do with Jesus Christ.