Gods in the Making 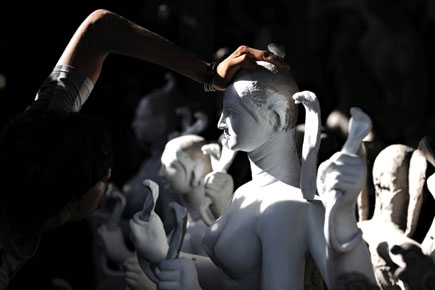 
Kumartuli, a colony tucked away in a bylane, is 400 years old, but that really does not make it special; there are plenty of such localities in Kolkata. Kumartuli’s uniqueness lies in it being home to 250 artists who produce around 40,000 idols annual­ly. And once made, all the idols don’t remain in India either.

Some of them are exported to countries like the UK, the US, Canada, Germany, Switzerland, Sweden, Finland, Italy, France, the Philippines and Singapore. Durga Puja is in October, but months before that, Kumartuli starts buzzing—this is the high point of the year for the potters’ colony. “The demand for Durga thakurs abroad has been escalating over the past five to six years. The first overseas order came about 32 years ago,” says Kaushik Ghosh, a big exporter in Kumartuli. Overseas orders are typically placed a year or so in advance and ship­ments start as early as March. The idols for export are made of shola (white paper pulp) and fibre, as they are less prone to damage than clay idols. While local pujas will have nothing less than eight to nine foot tall images, the ones shipped abroad are typically not more than five to six feet in height.

Typically, a Bengali association abroad keeps a Durga idol for six to seven years before re-ordering one. “Unlike here, where the clay images are immersed the same year, there they worship the same image for at least three to four years before replacing them,” says Ghosh. Earlier, artisans used to travel along with their images to set them up properly for the devouts abroad.

Activity in Kumartuli is at its peak now. They make as many as 3,500 Durgas idols during this period. The colony is dotted with what they call ‘studios’—ramshackle huts spread over a few hundred square metres that are stacked with stark, nude female forms of bamboo and clay. The rains are a deterrent to work, as are the spiralling prices of raw materials, lack of space and manpower. “It’s difficult to stay afloat. With prices of clay, straw, colours, everything escalating, it is hard to produce as many idols as I used to. And we cannot raise the price of our idols much, for then, we would not find buyers,” says Pradip Rudra Pal, who makes about 200 idols a year.