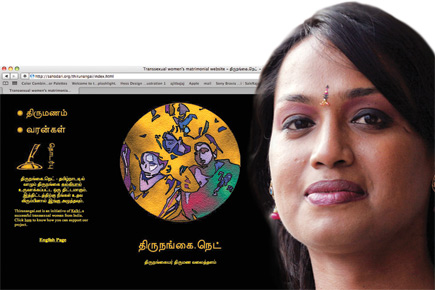 As of now, there are six transgenders featured on the website. “They are from Tamil Nadu. But we are getting responses even from men in France and Italy. I too wish to get married if a suitable proposal comes. It has already received 262 mails from hopeful grooms. Of them, 150 are genuine. Shortlisting is on,’’ she says.  She hopes the first transgender marriage via the site will take place by January next year.

Kalki is a Chennai-based graphic designer and transgender activist running the social organisation Sahodari. Before starting the portal, she edited a Tamil magazine Sahodari for the transgender community but it ceased publication after a few months due to lack of funds. She also has a theatre group to sensitise people about her community. Transgenders, she says, have traditionally had two living options—begging or prostitution. “Even those begging are sexually harassed. Those in prostitution are harassed by the police,’’ she says.

Transgenders are also exploited in relationships. She says some of the queries being posted on the site now are related to the conjugal aspect of such marriages. But she is talking about a wedlock that is based on the spirit of friendship and understanding rather than on sex.  “Quite often, men fall in love with transsexual women. However, owing to the social status of transsexuals, they do not recognise these relationships as genuine and only use it as a source for sex, money and exploitation.  Hundreds of transsexual women have been exploited by men this way in our society,’’ she says.

A five-member committee, including a lawyer and a writer, is assisting Kalki in screening responses on the site. Prospective grooms will have to undergo a direct interview by the committee. “I am trying my best to get transgenders respected by all sections of society,’’ says Kalki. She played a significant role in compelling the Tamil Nadu government to float the first welfare board in the world for transgenders. Now, forms and applications have the third option of transgender where one has to indicate gender. “Empowerment is the ultimate goal,’’ she says.