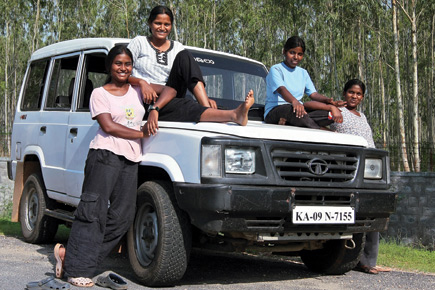 
A group of Mysire girls in their late teens giggle on hearing the question that we pose: what do you want to do in your life? “I want to drive all over India but I want to become an inspector first,” declares Gayatri. “I want to set up an institution like this one,” says Anita, about the place where she resides. “I want to become a nurse,” says Leela. After a sigh and pause, “I’m still thinking,” says Soumya. A fifth girl, Vinita, who is learning to handle a video camera, confesses her fascination for the electronic media. Vinita’s bosom pal Girija, tells us in Kannada that her big brother is an editor with a TV channel. It’s mumbled in a matron’s tone which tells us to better behave. And moments later, most of these girls are inside a jeep, taking us for a drive. We learn that they are getting offers to become chauffeurs, and a lot of their seniors at the place they live, already are.

These may not be unusual things for teenagers to pursue —or aspire to. But for these young women, the idea of a normal life was once absurd. “Most of them were very young when we caught their traffickers. Many were psychologically disturbed. Each one is a different story,” says Stanly KV, director of Odanadi Seva Samsthe, Mysore, an organisation that helps rescue, rehabilitate and re-integrate victims of trafficking into society. “The hardest part is to build their confidence from scratch, to give them faith in people (read men) since they have only seen distrust, exploitation, abuse and misery,” says Parashuram ML, another director. “So we teach them things like karate and driving. We’re such a hypocritical society that becoming a ‘driver’ is looked down upon. But for these women it’s a form of empowerment. It’s a break from restriction.” Indeed, many students at Odanadi chauffeur for companies, give yoga instruction and work in the corporate sector.

The organisation has many rescuers and an elaborate network in cities like Bangalore, Mumbai, Delhi, Chennai and Kolkata, that help to bust human trafficking rings. Some have been saved from the hands of brothel owners and sex traffickers, while others from abusive homes, child marriages or domestic servitude. Odanadi currently has 85 women staying with it. The nearly 20-year-old organisation also hosts many students of sociology, human rights and related disciplines from abroad, all of whom come to study and work with the organisation. As we dive into these details, a car honk comes from the main gate of Odanadi building. Gayatri and Soumya look at us askance from inside their vehicle. “Don’t you want to go for a longer ride?” they ask.