How an idealistic couple is changing the lives of a tribal population in a rural outback of Tamil Nadu. 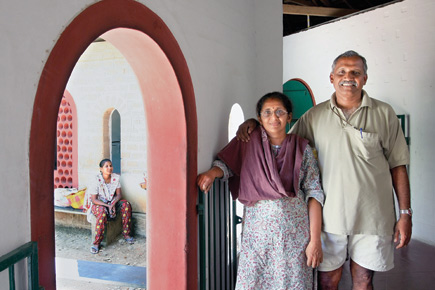 How an idealistic couple is changing the lives of a tribal population in a rural outback  of Tamil Nadu.


Sittilingi, in Dharmapuri district of Tamil Nadu, looks like an idyllic village. It is a lush hamlet located in a valley at the heart of four green hills. But till 1992, grief was terrifyingly common among the 80,000-odd tribals who lived in this area. With the nearest hospital some 100 km away, one of every five babies born in this valley died before its first birthday. The only recourse usually available was black magic. That is till doctor-couple Lalitha and Regi George arrived.

“The situation was appalling. Women gave birth in the dirty backyards of their huts. And in the process, they had to spend at least a week unclean and unattended,” remembers Lalitha. The idealistic couple—he from a prosperous Kerala Christian family and she from the Hindu royal family of Kochi—met in medical college and decided to forgo urban careers in favour of working in a rural spot. She is a gynaecologist, he an anaesthesiologist.

To figure out where the need was greatest, Regi set out on a road trip through various parts of India that eventually led to Sittilingi, with its 95 per cent tribal population. Till the couple came, superstition and sorcery supplemented illiteracy and malnourishment here.

The couple’s Tribal Health Initiative (THI) began functioning from a mud-thatched hut hospital in 1997. “Apart from direct care administering at the hospital, we wished to focus more on community health in general. In the beginning, it was very difficult to convince tribal women of modern medical practices,” recalls 51-year-old Regi. It took repeated house visits, lots of counselling, and one serendipitous event to finally convince the people.

“A woman with diarrhoea turned critical when black magicians performed crude rituals on her instead of administering medicines. After initial resistance, they allowed me to treat her and fortunately, she was cured. After that, people slowly started approaching us,” says Lalitha, 49.

With funds from friends and a few grants, THI has grown into a 24-bed hospital with a separate operation theatre, labour room, neo-natal room, emergency room, laboratory, even a special TB wing. Facilities like X-ray machine, laboratory, ultrasound machine are also available. THI has also trained a number of villagers as staff.

The outpatient department treats as many as 16,000 people a year. When the hospital began, the infant mortality rate here was 150/1,000. In 2008, that reduced to 30/1,000. “Women now deliver at the hospital and each pregnant woman gets at least three ante-natal check-ups during the maternity period. And there are no deaths due to pneumonia and malnutrition,” says Lalitha. And that’s why this outsider has come to be known as thai, or mother, in Sittilingi.