Villagers in Uttar Pradesh are being treated by doctors sitting in Delhi, via telemedicine centres 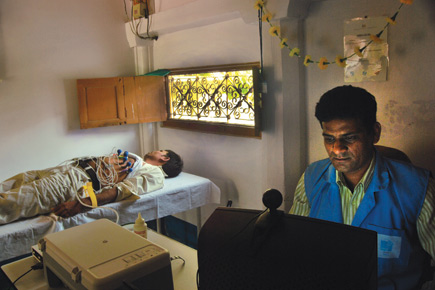 Villagers in Uttar Pradesh are being treated by doctors sitting in Delhi, via telemedicine centres


At Wazirpur Bhagwanwala, Bhainsa and Sahaspur villages in Uttar Pradesh, when people fall ill, they usually hire a taxi to the nearest town, which could be between three and 30 km away. All these villages do have local medical practitioners, but those who can afford it—as well as the severely afflicted—usually go to a ‘doctor in the town’. Many even have to take a loan just to get a consultation. All this, however, may be a thing of the past if locally run telemedicine centres, where villagers can get diagnosed by doctors sitting in Delhi, become a success.

A non-profit organisation called World Health Partners (funded by one of the world’s largest anonymous donors and headquartered in Berkeley, US) started this programme about a year ago.  Eventually, it is proposed, about a hundred Sky Centres, as these telemedicine centres are called, will dot the rural and semi-urban landscape of three districts in UP: Muzaffarnagar, Bijnore and Meerut.

Roughly, each telemedicine centre caters to about ten villages. The centres are equipped with broadband internet connection, a PC, webcam and a telemedicine gadget called ReMeDi, which lets the tele-doctor use a stethoscope, ECG, BP apparatus and a thermometer to examine the patients in the rural OPDs.  Here’s how it has helped villagers already.

A patient who had a kidney stone removed was recuperating in Bhainsa, her village in Meerut district. But a week after the procedure, she manifested radiating pain in the back and a severe headache. She walked to the general practitioner in the village but the doctor, a Bachelor of Ayurvedic Medicine and Surgery, had no experience in treating such a case. So, instead of referring her to a doctor in Mawana town, he logged on to the telemedicine network and got the patient a consultation from a doctor in Delhi. Monetary expenditure apart, the patient was in no condition to travel even the 4-5 km to Mawana, the nearest town where an MBBS doctor could be located.

Compared to Bhainsa, Bhagwanwala, in Bijnore district, doesn’t even have a GP—ayurveda, homeopath or unani. Bijnore, 30 km away, is its nearest town. Here, the Sky Centre is run by Harvendra Gehlot, who was once a path-lab technician. When he is not around, work doesn’t stop. His wife logs on to the telemedicine system and facilitates the teleconsultation.

This is how it looks from the sugarcane fields of Uttar Pradesh. The franchisee centres aren’t exactly minting money. And the programme needs to expand and offer more services. But even as it exists, this high-tech OPD in backward rural India village seems to hold more promise than the Central Government’s plans to armtwist MBBS graduates into seeing patients in India’s remote districts.