A unique project involving a former journalist, MIT and Microsoft has given the state its own community radio via mobile phones. 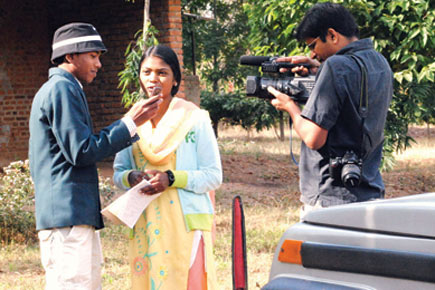 A unique project involving a former journalist, MIT and Microsoft has given Chhattisgarh its own community radio via mobile phones.


Ensconced in the insides of Chhattisgarh, a group of villagers hears a cell phone ring. It is news time. They press the ‘receive call’ button on the cell phone and put it on ‘loudspeaker’ mode. The report tells them in Chhattisgarhi-accented Hindi about the upcoming anti-liquor campaign in Jashpur district of the state. They take in the news and word is spread in the area. In another instance, one person dials a Bangalore number to inform about the upcoming panchayat meeting in the district. As soon as the report is registered, it is checked by a team in Bangalore and an SMS is sent to locals in Chhattisgarh to receive the news. They call the number and take in the info. Welcome to Chhattisgarh’s first community radio courtesy mobile phones.

“As a journalist,” says former BBC India scribe-turned-activist Shubhranshu Choudhary, a driver of the initiative, “I found the mainstream media completely cut off from the locals of Chhattisgarh. The media wasn’t engaging a set of people that number up to 2.7 million by the 2001 census!” So he decided to set up CG Net Swara (Chhattisgarh Swara—Voice of Chhattisgarh). “I wanted technology to bridge the digital divide. This is an area with low literacy and poor traditional print and TV media presence. But there is a healthy mobile phone penetration here,” Choudhary explains. The point was to reach the people of Chhattisgarh through this platform. Choudhary took his plan to the International Center for Journalists, Washington, DC, where he is a fellow. And now, the software for it is being developed by Massachusetts Institute of Technology along with Microsoft India.

In the process, Choudhary and his team have also helped a number of locals in the state turn into citizen journalists. Numbering 33 across the districts of Chhattisgarh, these people have become the eyes, ears and mouths of the radio service. “We release one in three messages we get,” says Choudhary. A team in Bangalore checks the facts behind the message through local sources. But the service doesn’t restrict itself to news per se. “We’ve also begun airing folklore songs and poems. There have also been reports about how to prepare traditional medicines and forms of knowledge,” says Choudhary. Though a bulk of the messages and reports are in Hindi, plans are underway to stream news in the local tribal dialects of Gondi and Kuduk. There are also attempts to make the Bangalore number which people dial a toll-free one. For hitherto disconnected Chhattisgarh, it’s time to ‘only connect’.