A Place to Call their Own

Mumbai got its first ever pet park recently 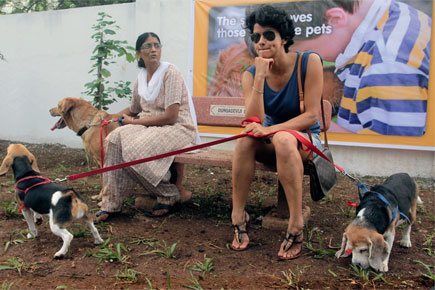 Mumbai got its first ever pet park recently


News of parks being opened in Mumbai, a city with vastly expanding concrete structures and diminishing open spaces, is always met with joy. But recently, it wasn’t just elation that followed the news of a park’s opening. There were also plenty of bemused brows. This is because the park is for pets.

Yari Road in Andheri, an area known for being the home of Bollywood and television celebrities—Priyanka Chopra and Shahid Kapoor, among others, live here—got another feather in its zip code: Mumbai’s first pet park. Called Yari Road Pet Park, the facility is managed by an association of locals called Ashoka Road Residents’ Association (ARRA).

The area was earlier a dump yard, but residents were able to persuade the city’s municipal body, Brihanmumbai Municipal Corporation (BMC), to permit them to convert the area into a park.

“It was a filthy place where miscreants would hang out and consume drugs. We were worried that the authorities wouldn’t agree to a pet park. But while some found the idea amusing, the BMC readily agreed,” says Meenakshi Thakur, a former actress and ARRA secretary.

Thakur says things just came together. “From requesting the BMC to the actual opening, it just took six months. After we got permission, we raised a small sum for cleaning up the area. Some even paid for benches in the garden. And then Pedigree [a dog food brand] came on board to provide for the upkeep of the space.”

According to Thakur, the park was a genuine requirement. “Many residents here have dogs,” says Thakur, who owns a 10-year-old Cocker Spaniel named Buddy. “Earlier, we used to take them for walks to a nearby park. But later, pets were barred from [the park]. We didn’t have an option but to walk them on the streets. This was dangerous because there are always a number of cars and stray dogs.”

The park is only 5,000 sq ft in size. But despite the frequent showers, at least 50 dogs have been trooping in every day. A number of tree and grass saplings have also been planted. Every few weeks, there will also be events for pets.

The opening of the park was fairly starry. Gul Panag, Jackie Shroff and Anant Mahadevan came with their pets. The park is open to everyone, not just Yari Road residents.