A Couple of Letters 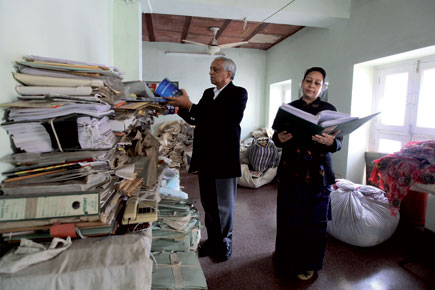 
Madhu and Subhash Agrawal are more or less made for each other. In 2004, she got a Guinness World Record for writing the most number of letters to the editor (447) in a calendar year. In 2006, Subhash won his own Guinness record, without dislodging his wife’s, for writing the most letters (3,699) to newspapers in a lifetime. But in Delhi, they are famous for another vocation—filing RTIs.

“We don’t watch movies, socialise or go out anywhere. We just love to file RTIs,” says Subhash, a 62-year-old cloth merchant. He reads at least six newspapers and his TV is always on. “That’s all I do,” he says, sitting among piles of files in his office at their Old Delhi residence in Dariba Kalan. “We share a passion for letters and information,” says Madhu.

Married to Subhash for over 30 years, Madhu, 61, assists him in their family business. She  doesn’t mind the clutter of papers and files created by her husband. “I got interested in this hobby of his, living with him over the years. He is definitely more proactive,” says Madhu.

Agrawal’s RTI requests are varied—assets of judges, pending utility bills of parliamentarians, foreign trips made by Lok Sabha Speaker Meira Kumar and the cost of toilet blocks at the Planning Commission’s office. As a rule, he files one RTI application every day, and the total number is now over 6,000. He filed his first application after a family spat over ancestral property. The ‘idea’ came from then RTI activist Arvind Kejriwal.

“I like the idea of information and the power it holds to change things,” he says. As a college student, he wrote a letter to Dainik Hindustan in 1967 complaining about the misconduct of a DTC bus conductor who cheated him of 20 paise. “The bus conductor came back and apologised to me, once the letter was published. I was delighted,” he says. What followed was an obsession with writing letters to editors. Once they were published, he would send those clippings to the concerned authorities.

Watching the protests at India Gate on TV, Agrawal is getting ready for a new task. “I am trying to find a way to file an application on the subject. Maybe something on the conviction [rate],” he says.