Slip Away: Around the World in Style 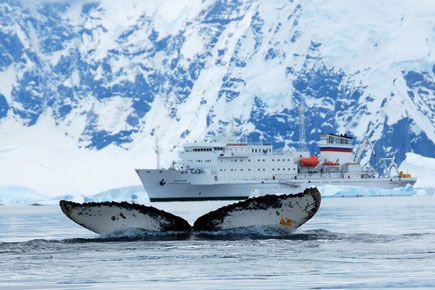 Four seasons, four reasons to live it up in some corner of the globe

“Once a year, go some place you’ve never been before,” says His Holiness, the Dalai Lama. If you are suffering from a seri- ous case of fernweh, once a year will not suffice. So here are a few ideas on how to jetset around the world through the year, soaking in the wonders and doing it in style.

FIRST, THE CRADLE OF MANKIND

January to March is a good time to go back to our roots. As a new year begins, it’s time to introspect and take stock of things gone by and the days to come. Where else to do this but in the place where it all started.

Serengeti in Tanzania, east Africa, is on the bucket list of everyone afflicted with wanderlust. With its golden grasses, flat-topped acacias and giant baobab trees with branches that look like gnarled roots, the set-piece kopjes and the mighty Kilimanjaro peeking out of the clouds, it is the backdrop to the rolling, seemingly unending Savannahs of Serengeti. In this dreamscape, majestic lions stalk the wildebeest, mammoth elephants trudge along, leopards perch on treetops and gazillions of gazelles graze everywhere.

early in the year, the wildebeests migrate from the plains of Masaai Mara in Kenya to Serengeti in Tanzania in search of fresh grass and rains. Late January to middle March is the calving season and the herds concentrate on the ndutu and Salei plains of Southern Serengeti and the ngorongoro Conser- vation Area, attracting all the predators. The great game of life unveils here, the strong preying on the weak, and the sheer number of animals congregated on the plains makes for unforgettable moments.

High-end safari experts like Micato Safaris, Jacada Travel and Abercrombie & Kent can help design a bespoke trip to Serengeti. Fly in private jets, stay in luxurious camps that are set up along the path of the migration, indulge in spas while watching giraffes stalking about, survey the savannahs from a microlight, dine around log fires, and be pampered by champagne and straw- berries. You will soon appreciate Isak Dinesen’s words in out of Africa, “The air of the African highlands went to my head like wine; I was all the time slightly drunk with it.”

THEN, THE PLAYGROUND OF THE RICH

As springtime slowly turns to summer, the months between April and June offer the best possible weather to explore the south of europe. The skies above the Mediterranean coastline are that perfect shade of blue, the sun is warm- ing up, and the air is crisp and heady with the smell of ripening figs and grapes. Head to Cote d’Azur in Southern France where golden beaches stretch east from Hyeres all the way towards the Italian border.

Cannes, nice, Saint Tropez and Monte Carlo, synonymous with unabashed os- tentation, are undoubtedly the jewels in the crown of the French Riviera. Spend mornings floating from one designer store to another, and rest your tired feet in the quaint cafes on the Boulevard de la Croisette as you take in the summer sun. Work on your tan as you zip in a sports convertible down the Grande Corniche to catch the Monaco Grand prix in April. And later, hobnob with stars at the Cannes Film Festival in May. And when you get bored with all that glitz and glamour, rent a luxury villa in the hidden villages of Eze, Mougins, Roquebrune or Saint-paul-de-Vence on the cypress-dotted hills. Work on your appetite as you walk along the quaint cobbled alleys and explore some ruined ramparts. Join a cooking class to dis- cover the culinary delights of Southern France. In short, live life French size.

AN AUTUMN UNDER THE SEA

A hornbill chuffs away somewhere close by. The warm breeze rocks your hammock gently. The emerald green waters soothe your senses and the sound of gently rolling waves lulls you to sleep. Time flows in a strange way in this paradise; every now and then seeming to stand still, as if mesmerised by the multitudes of candy-coloured coral that bob under the crystal clear waters.

The morning has been spent snorkel- ling among electric-blue damselfish and pygmy seahorses, pink and turquoise parrotfish, and the blue-ringed octopus that live among the house reefs. A power nap and a gourmet lunch later, it is time to scuba dive and take selfies with over 700 species of molluscs and over 1,400 species of fish.

You are in Raja Ampat, a far-flung archipelago in Indonesia, visited only by the discerning traveller. A flight to Sorong from Jakarta or Bali gives you ac- cess to this paradise. Misool eco Resort, with its 15 over-water villas and cottages set around a scalloped bay, is the place to stay.

Home to 75 per cent of the world’s coral species, Raja Ampat is dubbed the eden of underwater. The technicolour world below, with its rich and diverse marine life, will ensure that you spend most of your time snorkelling or scuba diving. Mid-September through to December is the best time to be here, when the rains subside and the visibility becomes clear for some perfect dives.

WINTER AMID THE ICE FLOES

The year is almost over and if you are wondering how to end it with a bang, head out to the highest, driest, coldest, windiest and most enchanting land- scape on the face of earth — the continent of superlatives — Antarctica. Luxury cruise operators like SilverSea expeditions, polar Cruises and Aber- crombie & Kent will take you around the Antarctic peninsula in special charter ships, which come complete with their own team of award-winning experts, including scientists, authors, historians and photographers.

In Cierva Cove, you will climb hills to catch a glimpse of the icescape from the top and celebrate with vodka shots in the world’s southernmost bar at the Russian base of Vernadsky. You will visit abandoned bases in Mikkelsen Harbour and Deception Island and feast your eyes on ice floes, white and glistening, in bizarre shapes and sizes. In Petermann Island and Pleneau Island, you will make friends with colonies of Gentoos going about their daily lives, waddling and slipping-sliding on the ice, oblivious to their visitors. Some- times, they nonchalantly totter towards you, daring you to tickle them. Porpoising penguins, breaching whales and sunbathing seals will be your neigh- bours and a butler-served five-star suite your home in the cold wilderness of Antarctica.

As the clock strikes midnight and ends yet another year of adventure, you will watch the tangerine sun hovering on the horizon and reflect on your travels. It is already time to start making an itiner- ary for the next year.

(Saswati Dutta Gupta is a wanderer, a bon vivant and a movie aficionado. Though she works as a Communication Consultant, she’d rather be trekking up the Inca trail or be scuba diving in the Bahamas.)