Instead of a fresh look, this new version comes with faster software and fingerprint sensors 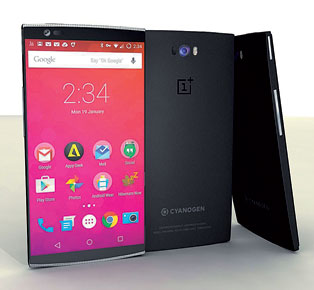 A year or so ago, no one knew the name OnePlus. It was an idea and geeks were in love with what it was proposing to do. Then the OnePlus 1 launched, and they lapped it up, as did power users. Over the past year or so, the phone has received mixed reactions, but the company has established itself as a maker of top specification products within a price bracket that is roughly half of what other major phone brands have.

The specs on the OnePlus 2 could put any flagship phone from a leading brand to shame. The phone comes equipped with a Snapdragon 810 processor, 4 gigabytes of RAM, 64 gigabytes of onboard storage and a 5.5-inch display with an impressive 1500:1 contrast ratio that puts out deep blacks and vivid colours, a 13 megapixel rear camera with a two tone flash, laser assisted focusing and a lens system that avoids distortion or colour aberration. On the front is a 5 megapixel camera that is great for clicking selfies and making video calls. The phone takes two nano Sim cards, and is also the first phone we have seen with a USB Type C Port for charging and data transfer.

For the average consumer, the OnePlus 2 looks alot like its previous avataar, but it does much more. At the outset is the fingerprint sensor on the front. The new phone also has a switchable back—if not the default sand stone, you could pick wood finish or Kevlar carbon fiber. Another value addition is the USB connector which allows you to plug in the charger cable the way you want it as there is no right side up, just like the lightning connector on the Apple iPhones.

Cyanogenmod has been replaced with Oxygen OS, which runs on top of Android Lolipop 5.1. Its minimalist approach ensures you get real-time performance and that the Android OS works fine. Overall, the OnePlus 2 is impressive, but we still feel that this is a phone best suited for geeks.