33 per cent thinner, 10 per cent lighter, 200 per cent faster, but priced the same as the first iPad 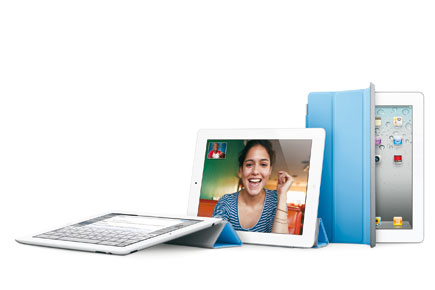 33 per cent thinner, 10 per cent lighter, 200 per cent faster, but priced the same as the first iPad


The second generation iPad runs on a Dual Core processor called the A5. It allows the iPad to do things faster and more smoothly—including rendering graphics nine times faster than the predecessor. Its other fascinating feature is its HDMI output, with which everything that is taking place on the  iPad screen can get mirrored on an HDTV. Say hello to watching movies and making theatre-hall presentations on the iPad.

The new iPad comes with a camera—two cameras, in fact, front facing for video chats and another at the rear, with which you can shoot videos of up to 720 p resolution.

Since the processor is a Dual Core, it has enough computing power to run iMovie on which you can edit your movies right on the tablet. Mac applications like Photo Booth will also run on it. The iPad2 also features a gyroscope, which allows gamers to control their games better. So, if you thought Need for Speed was great on the first iPad, check it out on the iPad2. The gyro also allows you to strum the guitar in Garage Band harder for a deeper sound, or hit the piano keys lightly to get that tingle like you would off a real piano.

The new iPad also comes with a new cover, which consists of magnets. As soon as you put the iPad into the cover, it goes into sleep mode. The magnets let the cover be folded up into a prism shape, so that it can be used as a stand for the iPad. You can prop the iPad onto it to watch movies, or place the tablet on it while typing.

The cover has micro fibres on the inside to clean the screen anew each time it takes in the iPad.

It is available in only Wi-Fi and Wi-Fi with 3G (GSM and CDMA) options. It is still available only in black and white colour options. While it will be launched in the US on 11 March and 25 other countries on 25 March, it could be a few months before it makes its way to India.

And did I mention, even with its enhanced performance and slimmer body, its battery time is still 10 hours with 30 days standby.