This gizmo can be used either as a smartphone or tablet 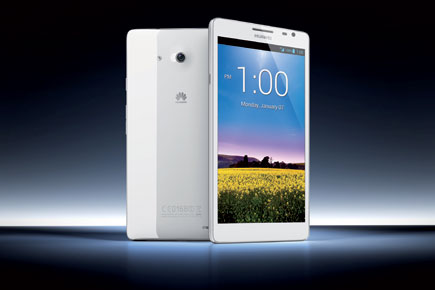 This gizmo can be used either as a smartphone or tablet


With a huge 6.1 inch IPS LCD that can display 1,280×720 pixels resolution at a 16:8 ratio, the Huawei Ascend Mate feels big. The screen is sharp and the phone is quick on its heels, thanks to its Quad Core 1.5Ghz processor, 2GB RAM on board, 8GB ROM and its storage that is expandable to 64GB using a micro SD card.

The LCD uses something called Magic Touch that enables you to use the touchscreen even with thick gloves on. Maybe not a big deal in a hot region, but in case you are out in the cold you can use this smartphone without spending money on capacitive touch gloves.

This smartphone features an 8 megapixel back-illuminated sensor and performs well on both day and night photography. The front of the phone has a 1 megapixel camera that is decent enough to take some self shots or conduct a video call.

Like most phones today, Ascend Mate uses a micro USB connector to charge it. The phone features a volume rocker and a lock button on one side. On the other side is a micro SD card slot. A micro SIM slot lies on top of the phone.

The Ascend Mate features a mono speaker and it comes with Dolby certification. Huawei bundles a headphone, but you will need to upgrade this in case you want to enjoy a better experience. The battery in my tests lasted more than a day and I was happy having a battery that still had 20 per cent charge the next morning.

In my tests the phone performed pretty well on the daily tasks of browsing the web and playing some games. However, though the processor is a Quad Core 1.5GHz, it won’t match the speeds of some of the expensive phones in this bracket.

The main drawback for me is the size, but with people looking at the phablet market seriously, the 6.1 inch screen makes sense if you are trying to carry just one device. And with its solid build, good display and long battery life, this phone becomes an attractive option.