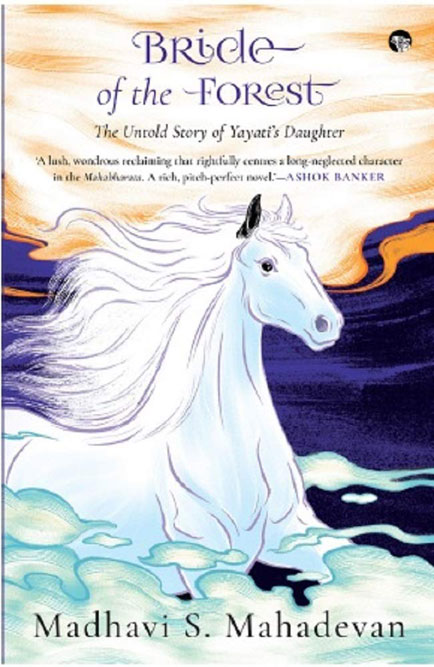 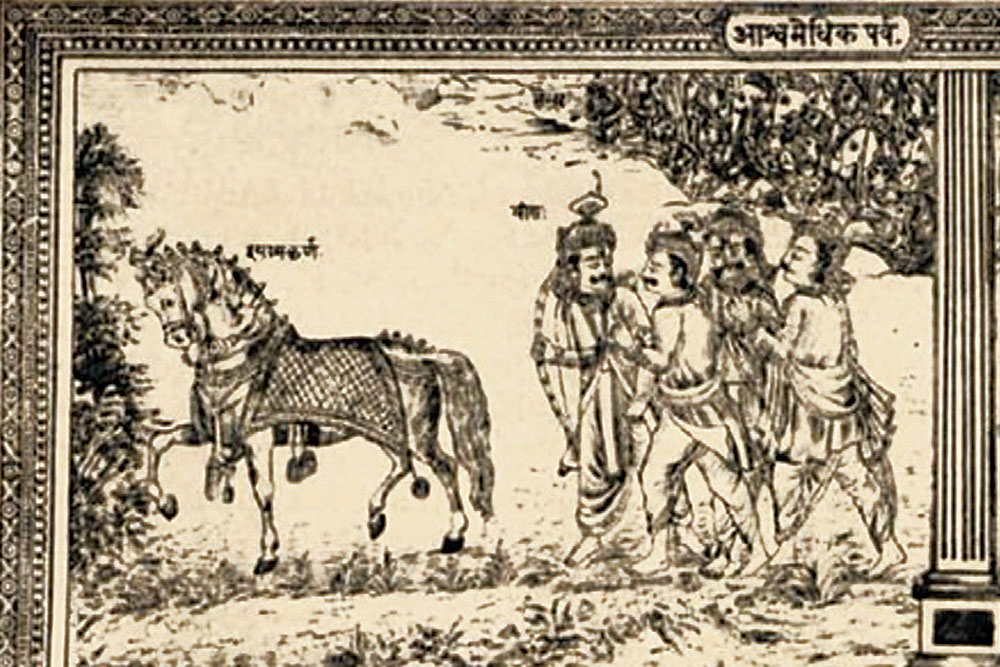 So much depends on a good book jacket. The days of ‘not judging a book by its cover’ are over. Did they even exist? If it came down to just cover art, I would not have picked up Bride of the Forest by Madhavi S Mahadevan. It even has a subtitle: The Untold Story of Yayati’s Daughter.  The jacket art is of a white horse with a black ear, a very nice horse, a perfectly good horse for a poster on the wall of a teenage girl’s bedroom. Horses are hard to draw, I can vouch for this as someone who has been trying to draw a horse without it looking like a weird cow-dog hybrid. The horse is also relevant to the story, especially this horse, a white horse with a single black ear, But on first glance, it looks like a book about horses. And to be honest, even Black Beauty got to be a bit much for me in the end. Great animals; beautiful and majestic and all of that. Just—in my opinion so do not troll me on Twitter for this, horse-lovers—not very interesting.

So, I would not have been drawn to Bride of the Forest. Which would have been a shame, because it is a fun book, especially for people with a little more than extra interest in Indian mythology, which I am. The novel is based on the obscure story of Drishadvati aka Madhavi, the daughter of a king, who is blessed with the ability to bear crown princes. Four of them, to be exact. (In other versions of the myth, she also becomes a virgin after each birth, but Mahadevan has chosen not to explore this which was for the best.)  Her father gives her to a man who has to scour the earth for all-white horses with a single black ear as a guru dakshina for his teacher, and tells this man—Gaalav—to trade his daughter for horses at every kingdom where the ruler was sonless. So far, so patriarchal.

Perhaps there’s a reason that this myth remains less explored than others. There’s a lot of backstory, a lot of ‘and then so-and-so’s daughter did this’ which leads to curses and all the stuff that moves ancient Hindu myths along. To take that story and crunch it into 327 pages requires assuming that your readers are following along with you, that they know who you’re referring to. For the most part, Mahadevan does this well. The stories are like nesting dolls, each one giving way to the next, but there’s no zooming out so we can see how they all fit together. It seems confused in parts: does it want to retell the mythological stories faithfully or does it want to linger inside the rebellious mind of Drishadvati and her thoughts? Do we want to talk about sorrow and motherhood or do we want to talk about hubris? There’s a lot happening, and a reader could be forgiven for being slightly whiplashed by the way the narrative changes as they read.

Another example of this is how the book often breaks out of traditional straight storytelling to offer a tongue-in-cheek aside. Take these sentences: ‘The story of Shukracharya’s imaginative curse had become well-known in Aryavarta. It had become a case study. Boons and Curses: How, Where and When To Use Them was a popular subject…’ This sort of thing, a wink to the modern day reader happens here and there throughout the book and feels a little jarring. All that work to establish the epic scope of the story only to be stopped halfway and told a joke and then immediately thrown back into the text. It feels almost as though there were two books here, a serious story about feminism and surrogacy in ancient India, as the blurb promises and then another one, a ‘romp’ using contemporary metaphors to tell us the story.

On the other hand, Bride of the Forest does deal with a part of the Mahabharata we seldom read about in contemporary retellings. And for that alone, is worth a look.