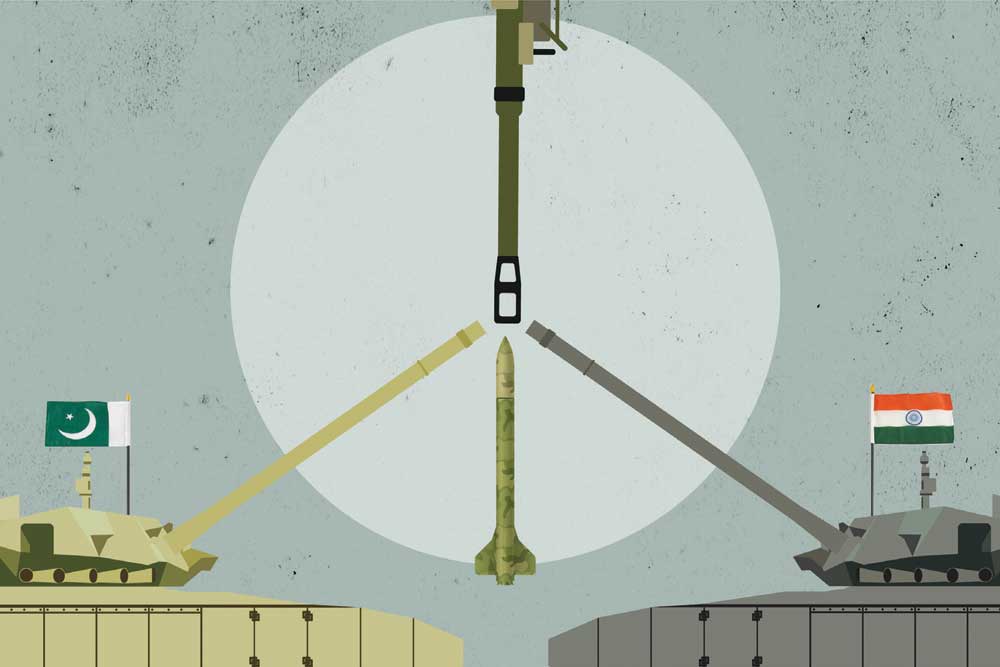 IN 1965, SOME years after the war in Vietnam began, US military planners posed an interesting question: was there a way in which military force could be used to send a signal to Communist North Vietnam to sue for peace and come to the negotiating table? The idea was simple even as it was innovative: inflict pain on your enemy and dent its will to fight. The trouble was, no one knew how to go about doing it.

When consulted on how to execute the idea, Thomas Schelling—the Harvard University economist who would later win the 2005 Nobel Prize in Economics for his contributions to game theory—suggested a carefully calibrated bombing of North Vietnam. According to the plan, the air bombing was to pick carefully selected targets in the North and apply ‘graduated pressure’ on the Vietcong in a bid to send ‘signals’ of US intent. Schelling, however, said the bombing should not last more than three weeks at the most. By that time, the ‘signalling’ would be clear to the enemy.

In the end, the three weeks turned into three years. By the end of the campaign—called Operation Rolling Thunder—North Vietnam refused to budge and no amount of ‘signalling’ could coerce it to the negotiating table.

Since then, Schelling’s idea—“The threat that compels rather than deters requires that the punishment be administered until the other acts, rather than if he acts,” in his words—has become a byword among strategists, security experts and war gamers. Labelled as ‘Compellence’, the idea has remained in currency all these years, even if in practice its fortunes remain somewhat mixed.

A recent example illustrates this. Closer home, India allegedly blockaded landlocked Nepal from late September 2015 until early February 2016, withholding fuel and other essential supplies on the border. From Nepal’s perspective, the Indian action was designed to compel Nepal to accede to demands made by the Madhesi community that has close cultural links with India. Madhesis claimed Nepal’s new constitution discriminated against them. Ultimately, the blockade—ambiguous as it was—did not yield much to India or the Madhesis. Blockade, a classic application of Compellence, had not worked even under conditions where its success was likely; Nepal is a landlocked country dependent on Indian goodwill.

This real-world example and many others have not deterred two political scientists who specialise in nuclear non- proliferation and the study of nuclear weapons from advocating a novel form of Compellence as an option for India to persuade Pakistan to ‘behave’. In Not War, Not Peace? Motivating Pakistan to Prevent Cross-Border Terrorism, George Perkovich and Toby Dalton explore the limitations of India’s armed responses to the challenges posed by terrorism emanating from Pakistan. Perkovich is the author of India’s Nuclear Bomb (1999), a comprehensive study of nuclear policymaking in India. Dalton is a non- proliferation specialist. Both work at the think-tank Carnegie Endowment for International Peace in Washington DC.

The core of the book, and the argument as well, is that India is not sufficiently prepared to deliver a military response to Pakistan in case of a transgression. The two authors have carefully looked at the full range of options from covert operations to air power to nuclear capabilities and have concluded that Pakistan has India by the hook. Here, there can be no argument that India is indeed on a weak wicket. In the 17 years after the Kargil War of 1999, India has faced a number of provocations from its western neighbour. Two of these—the attack on Parliament in December 2001 and the Mumbai terrorist attacks of November 2008—were of sufficient intensity for India to contemplate war. But in both cases, two Indian prime ministers of very different persuasions, Atal Bihari Vajpayee in 2001 and Manmohan Singh in 2008, were stopped right in their tracks. Perkovich and Dalton persuasively argue that between the poles of India’s military weaknesses and the danger of a conventional military operation escalating to a nuclear war, India has few options at hand to keep Pakistan in check. India’s weaknesses are well- known: a broken weapons procurement system to a very weak link between political goals and military means and the country’s long-standing strategic restraint when it comes to launching wars. There is little to quibble here.

IT IS IN the final part of the book, where the authors return to what India can do, that their argument breaks down. Their solution is for India to use ‘non- violent compellence’ against Pakistan, which includes a clutch of measures like economic sanctions, political isolation and the use of innovative social media campaigns to force Pakistan into preventing terrorist attacks from its soil.

Unfortunately, the idea of non-violent compellence is under-theorised and is also devoid of a historical understanding of South Asia’s complex dynamics. Consider the theory first. There is sufficient experience now that Compellence works only under very restrictive conditions. The Rolling Thunder campaign did not work in part because Vietnam had foreign assistance from countries like China and the Soviet Union that helped it escape the worst of American attacks. Then again, Compellence at times requires a continuous application of force right until your enemy submits. Pakistan has tried its own variant of Compellence against India: the terrorist attacks and the Kargil War were meant to bring India to the negotiating table by telling the world about the dangers of war between two nuclear-armed rivals. But as Robert Jervis, the perceptive American scholar of international relations, noted after the Kargil War, Pakistan would have to unleash violence all the way up to the nuclear level against India for Compellence to work. It has not worked so far.

It is not surprising that Gandhi has been pressed into service while furthering the idea of non-violent Compellence. ‘Though Gandhi and the Indian independence movement employed non-violence with great strategic effect, Indian leaders and security professionals in recent years have preferred not to invoke this model of strategy and instead have compared India’s policies with those of United States, Israel, and to a lesser extent, China’ (page 230). This is incredulous and historically misleading on many counts. For one, the British displayed profound ambivalence in handling the Indian freedom struggle as a matter of policy. In the known typology of colonialisms in Asia—from the obdurate French and Dutch varieties to the mere holding operation by the US in the Philippines—the British variant was accommodating of Indian aspirations. From training Indians in legislative matters to letting them slowly take the reins of power, the British slowly and steadily agreed to what Indians wanted. To speak of a Gandhian strategy in the context of the contemporary reality of Pakistan— with the Indian ‘devil’ as its foundational myth—is, to put it gently, misplaced.

For another, throughout its existence from 1947, Pakistan has found it required one foreign guardian or another to sustain itself. First, it was the United States. Now it is China. The reasons for these powers to help Pakistan may have been different, but the effect is the same: its national survival. For India to launch a ‘strategy’ of non-violent Compellence is a non-starter. You can be sure that in case of economic trouble, China will bail it out. At one time, when in trouble, US ‘persuasion’ was enough for the International Monetary Fund to loosen its purse strings for Islamabad; today it is Chinese investment from Gwadar all the way to the icy heights of the Karakoram highway. India persuading other countries to impose economic sanctions on Pakistan? You’ve got to be kidding.

Perkovich and Dalton are careful scholars and their lack of a historical and theoretical appreciation of non-violent Compellence—what it will require to work and its limits—is, therefore, surprising. Not War, Not Peace? is best read as a book on Indian military shortcomings and not as a prospectus of what it ought to do about persuading an army in possession of a country.