‘They are elitist bullies, these feminists’: Chetan Bhagat

The sacred feminine according to Chetan Bhagat 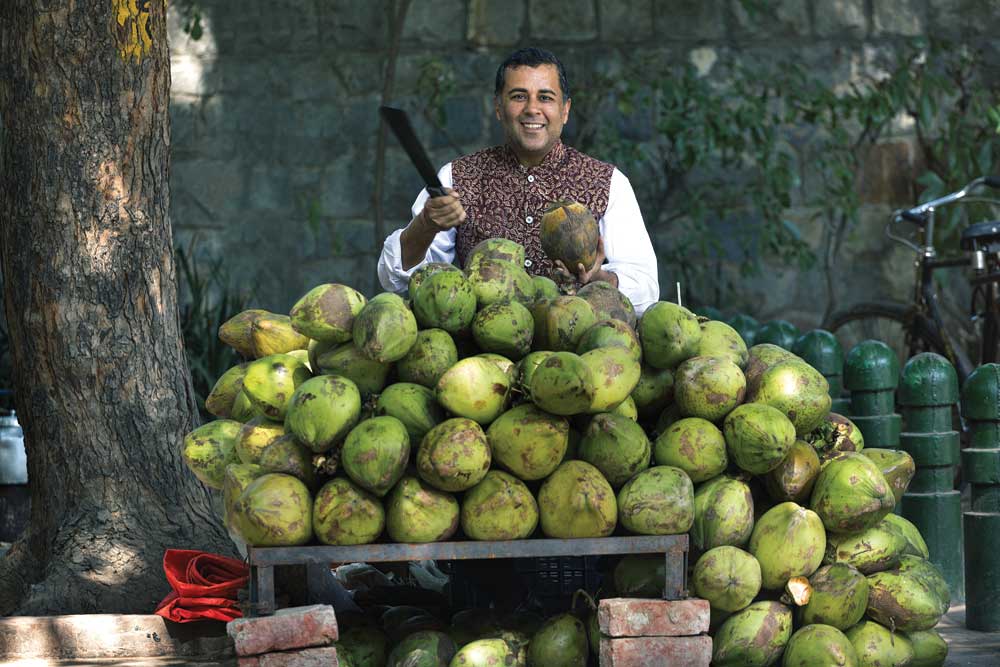 CHETAN BHAGAT, AUTHOR of seven novels in the last 12 years, who has sold more copies than any other English language author in the country, is a deeply divisive figure. Readers either hate him or love him. A quick search on Facebook and Twitter of his latest title, One Indian Girl (Rupa; 272 pages; Rs 176) will throw up numerous entries that plop on both sides of the divide. Some readers will bemoan that this man knows nothing of women and that his books are only toilet-paper worthy. Others will applaud, ‘This is my story, this is my life’, and send him a hundred hearts. This extreme reactions that Bhagat and his books evoke reveal more about Indian English readers and their mind sets than they do about him. Today, Bhagat is more a totem than an individual. For one (much larger) section of readers, he is an emblem of authority and affinity, he speaks to them and for them; for another, he symbolises the spread and hold of mediocrity, a populist at best, a charlatan at worst. The tragedy in India is how irreconcilable these two groups are, the snobbery and haughtiness of one pitted against the ambition and sincerity of the other.

A few years ago, Bhagat had dismissed the snobs as ‘literary brahmins’—or those who anointed themselves the gatekeepers of literature. While literary brahmins even today scurry away, for fear of the shadow of a Chetan Bhagat book falling upon them, he has no cause for worry. This IIT-Delhi and IIM-Ahmedabad graduate and former investment banker has numbers on his side, unlike his contemporaries in literary fiction who struggle to sell a few thousand copies. To them, he says, “If they feel they are writing something superior, like a Rolls-Royce, and that is why it is not selling, good. If it makes them feel better, good for them. But chances are, if they are not selling, they are not connecting to people.”

Connecting to millions is something Bhagat has done. One Indian Girl beat Harry Potter and the Cursed Child’s day-one pre-order sales within 30 minutes of going live, creating history on the Amazon site. The initial print-run of his last book, Half Girlfriend ,was close to 1.5 million copies, according to media reports. Revolution 2020 sold 1 million copies in 100 days. “I am bestselling,” he says, when we meet in Delhi. “I have not claimed to be the best. The numbers are there—that answers everything.”

Bhagat takes particular offence to those who tut-tut the English of his books. Pacing up and down his hotel room (in a bid to find his socks), he says that his publisher at Rupa, Kapish Mehra, has put the best editors on his book. “David Davidar, who discovered Vikram Seth, is one of the editors. Then there is Shinie Antony—a Syrian Christian and a proper English Literature major… all the editors will say that my book has normal English. There is that elitism [of certain critics] that has not gone away. People are not understanding that this is a new reality.”

One Indian Girl deals with a new reality. Told in the voice(s) of Radhika Mehta, it is the story of a highly successful 20-something associate at Goldman Sachs who is trying to find love and herself. The setting is the Marriott in Goa, where the Mehta and Gulati families have gathered for the six-day wedding celebration of Radhika and Brijesh. Complications arise in the form of Radhika’s exes—Debu and Neel, who gate-crash the shindig. In Bollywood style, Radhika’s flashbacks about her respective lovers whoosh her to exotic foreign locations, namely New York and Hong Kong. Who will she choose? What will she do? That is the question.

The book is a page-turner in its own way. Bhagat gets the male characters right; they are pricks. So self-absorbed in their own hankerings that they would leave any right-minded woman yearning for a dildo. And Bhagat shows these males for what they are. Debu might be the socialist well-read Bengali, but ideas of equality are the stuff of theory and not to be practiced. This ‘creative’ type working in an ad agency in New York breaks up with Radhika declaring, ‘I want a simple life. I just want a simple Indian girl.’ (As Bhagat says, ‘simple’ in the Indian context is just a euphemism of ‘submissive’ and ‘stay under my control’.) Neel might be a partner at Goldman Sachs, but he is all too willing to forget his wife and children in the arms of Radhika, who is 20 years younger than him, works for him and reminds him of youth, a phase he can never salvage.

There are feminists who say, ‘Feminism is being strong. It is not going after a man.’ But that is dehumanising. It is like saying emotions do not exist

Bhagat has made a noble effort to enter the psyche of a young woman. But ambition and execution are not always congruent. A host of unfortunate clichés riddle the text. Such as Radhika as the ‘nerd’ girl who must find self-affirmation in men; while her life is a series of ‘firsts’, the men are always more experienced, whether it comes to matters of sex or cunnilingus or smoking a joint on a beach, or even naming constellations in the sky. The ‘mini-me’ (or the voice in Radhika’s head) delivers dialogues like, ‘How can a girl admit she is thinking about kissing? Isn’t that what super- sluts do?’ or ‘Did he notice my legs yet? Did dinner make my stomach flat? Are my boobs in place? Can this guy walk slower so I can keep up in my heels?’ Such lines will compel a reader to add an exclamation mark in disbelief to the margins of the text.

But Bhagat wouldn’t care about these exclamation marks. He says, “There are feminists out there who say, ‘This is not feminism. Feminism is being strong. It is not going after a man.’ But that is dehumanising. It is like saying emotions do not exist. If a guy you love, who you’ve been living with for two years, breaks up over WhatsApp, you will be devastated. You will crumble apart. If you have had a complex about your looks and a man leaves you, you will think ‘Aur koi milega ya nahi? In that emotion, you will do things you don’t want to do. You’ll say, ‘I am quitting my job.’ It does not make [Radhika] less of a feminist. It is just that she is so culturally tuned to compromise. If she feels desire for a guy, she is brought up to think that this desire is wrong. And she thinks, ‘Is this what a slut is?’”

The reactions to this book have only bolstered Bhagat’s notions of the fault lines in the country’s feminist movement, which he believes excludes the “actual Indian woman” (whoever that might be). Clearly training his guns at the English-speaking elite, he says, “Just because you read the New York Times or some articles on feminism, it does not make you a better authority on feminism. Neither am I. It is not a movement owned by experts. It needs to be more democratic. It has become too elite and non-inclusive. Today a few people wear the tag of a ‘feminist’ to sound cool at parties.” It is for this reason, he says, that while women (such as flight attendants, co-passengers, his readers) would happily share stories and opinions with him about their personal and professional struggles, they would also add the disclaimer: ‘Hum feminist nahin hain’.

Having interviewed a “hundred-odd women” for the research of this book, 42-year-old Bhagat feels he has a more democratic understanding of feminism. He says, “[The NYT reading types] have not understood feminism in a local context, to put it simply.” In a burst of eloquence that is hard to refute, he explains, “In a village, feminism is ‘humaari beti ko school mein daal do (Enrol my daughter in school)’. In a small city like Indore, feminism is ‘Sunday ko mujhe lunch nahin banaana hai. Mujhe baahar jaana hai (I don’t want to cook lunch on Sunday, let’s go out).’ Here or in New York, it will be, ‘Women should become CEOs.’ It is all feminism. But the issues are different in a local context.”

It is true that the battles of feminism change from location to location and context to context. But he errs elsewhere. Bhagat feels that according to a certain brand of feminism “women cannot have doubts and cannot be vulnerable, cannot pine for a man” and that this is “utopian” and “unnatural”. But feminism has never discounted these emotions, it simply questions being consumed by them and asserts that there is more to a woman than a man. Riling up a furry, he adds, “These are elitist bullies, these feminists. They bully men. They bully women. And they say, ‘Until you are with us 100 per cent, don’t talk about feminism’. That is not caring for a cause.”

The disdain Bhagat holds for a certain ‘elite’ seeps into his understanding of ‘intellectual’ as well. It is too “affected” a word, he says. While he does not think an author should be a ‘public intellectual’, he says, “I have a certain view on how India should be. All my opinions come from there.” In his fortnightly column in Times of India, Bhagat holds forth on everything from how the RSS should set up its own team of economists to demand 10 per cent growth, to how ‘over time, the media house becomes an incestuous pool of think-alike liberals who lose track of the general population’, to ‘if you are Kashmiri and care for Kashmir, the best thing you can do is to integrate with India. Your population size is small, only 7 million.’

His columns naturally bother many, especially those of the ‘elite’ who insist on complicating every issue, a skill he spurns. As Bhagat says, “It is not an expert piece. It is an opinion piece. I am not giving my opinion on marine dolphins. I am giving an opinion on something that affects my country. I write to create change.”