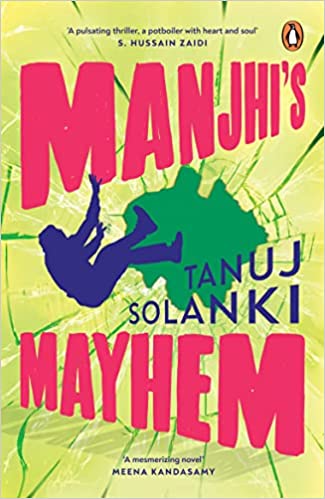 The Hindi proverb that ascribes zar, zoru, zameen (money, women, land) to be the sole reasons for animosity rings true in Tanuj Solanki’s most recent novel Manjhi’s Mayhem, in which the protagonist Sewaram Manjhi gets embroiled in a dispute only because the woman with whom he has had a one-night stand asks him to do tabaahi (mayhem). So begins a series of mukkas, laats, and ghoosas as Manjhi strives to solve the mystery of a lost bag full of money.

Solanki was awarded the Sahitya Akademi’s Yuva Puruskar for his book Diwali in Muzaffarnagar (2018), which borrowed its setting and nuanced characters from a suburban, eponymous town in Uttar Pradesh. Manjhi’s Mayhem marks Solanki’s detour into commercial fiction, and that too, a crime thriller, whose success often hinges on a plot that keeps its readers on edge.

Santosh, a doorwoman at La Japonaise—a restaurant overlooking Manjhi’s posh Bombay cafe where he works as a security guard—seduces him into thrashing Godse whom she frames as an abusive husband.  He beats Godse black and blue, only to later realise that Santosh had lied to him. It is only then that he gets to know about the bag of money, and even before realising it, gets sucked into the riddle.

The tightly wound plot is based on the oddities of the money-driven corporate world where the rich often have an upper hand. Even when Manjhi takes the bank manager’s family hostage, he asks him childlike questions related to banking—again highlighting the class differences that often get wider by the eccentric ways of a capitalistic society.

Manjhi’s Mayhem has all the ingredients of a racy crime thriller. For one, the pace never slackens, with every scene adding to the rising tension. His writing seems to be acutely aware of the male-dominated and  testosterone–ridden crime world. Take, for example, the exchange that happens between Santosh and Manjhi, when she tells him her name:

While the plot might seem commonplace, and Mumbai as setting for a noir cliched, what sparkles is Solanki’s eye for minor details. The generous smattering of local Hindi words (kaali-peeli for a taxi), characters like Ali and the old man who embody loneliness rampant in a city bustling with people, or subtle commentary on the current political discourse by naming one of the goons as Godse, reaffirms Solanki’s ability to deliver a layered narrative.

Solanki’s writing shines in parts, for example, Manjhi’s dream sequence. Even the character sketches like that of Martin Kalu’s draw a lot from Solanki’s experiments with literary fiction. The tempering with wit, humour, and sarcasm makes it all the more appealing. Sample this: “It all happened in a mix of Hindi and Marathi and kisses and fucking and knife threats and tummy punches and glass-breaking. Add to all that a monsoon of madarchods and bhenchods.”

The caste politics registers skilfully in the initial bits of the novel, with Manjhi adopting the name of Harish Jakhar on his Aadhar card. An upper-class name and a Jat surname would make him look strong in front of prospective employers, Manjhi reasons. Even Santosh’s brusque and abrupt remarks on knowing his identity are a critical commentary on the prejudiced world that we live in. Having said so, one also feels that Manjhi’s interactions in the later sections with the rich and influential men—who also happen to be upper-class men—even out his Dalit identity never posing him any unique challenges.

Ali’s description in the first chapter seems interesting, and we hope to see more of him later in the novel, but that never happens. The women eventually take a side seat and there is so much of Manjhi that we begin to tire down. Fighting all alone, Manjhi seems to be on a winning spree, his plans never backfiring. On getting two bags of money, as kind-hearted as Manjhi is, he shares it with the two sisters and deposits the rest in the old man’s account. I am tempted to think if the world would be a better place had there been more Manjhis.