The Master and the Neighbour

The best cricket book you will read this year, from Pakistan, outscores a passionate commemoration of the Tendulkar legacy 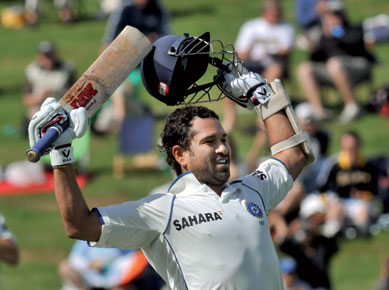 ‘The 18-year-old behind me, leaping up and down in an uncontrolled frenzy that threatened to send the phone clutched in his right hand flying, would vote for the first time in the Lok Sabha elections in 2014. He has seen no Indian cricket that does not involve Tendulkar. His elder brother voted for the first time in 2009. He, too, has seen no Indian cricket without Tendulkar. Tendulkar’s career has spanned their lifetimes.’

That passage, from Soumya Bhattacharya’s After Tendulkar: The New Stars of Indian Cricket is at the heart of a lovingly compiled book on the master’s retirement and the year that followed. For many Indians, a cricketing era and perhaps a part of their lives, ended that afternoon in November 2013, and Bhattacharya segues between Tendulkar’s farewell Tests in Kolkata and Mumbai and the exploits of the young men poised to take over the mantle.

As he showed with You Must Like Cricket? and All That You Can’t Leave Behind, Bhattacharya is a fine writer whose love for the game is all too apparent. His profiles of the likes of Virat Kohli, Shikhar Dhawan and Mohammed Shami are perceptive and sympathetic, and the narrative makes an earnest attempt to make sense of a period of great churning and transition.

The problem, however, is that none of this is really new ground. Journalists like Sandeep Dwivedi of The Indian Express have done fabulous profiles of some of these young players, and several reporters on the ‘beat’ have the added advantage of having watched them during their formative years. Bhattacharya has sourced his material well, and interviewed some of the upcoming stars and those close to them, but there’s little there to make you sit up and exclaim.

Osman Samiuddin’s The Unquiet Ones: A History of Pakistan Cricket is full of such little gems. Over the decades, few have managed to make any sense of Pakistan cricket without resorting to the same tired clichés about ‘mercurial’ men and ‘cornered tigers’. Samiuddin, the best cricket writer Pakistan and perhaps Asia itself has ever produced, has given us a labour of love, which trawls through the decades and gives us the definitive picture of a cricket team and nation in constant flux.

Sample this extract from the early years after Partition: ‘The entire scene had a communal feel to it. Money, kit, food, joy and despair were shared. During matches after the first innings, sides would often get together “and everyone would sit down, take their clothes off—such was the heat—and eat together and drink water from the well in Minto Park and bathe in it as well. It didn’t matter whether you were Fazal or Kardar,” says Universal’s Aslam Tayya. “Cricket was our nishaaniyat, our identity, it was who we were.”’

Those post-Partition years were dominated by two legendary figures, Abdul Hafeez Kardar and Fazal Mahmood. The tension between the Oxford-educated captain and the salt-of-the-earth pace bowler would be reprised over the decades. Imran Khan and Javed Miandad didn’t always see eye to eye, while Wasim Akram and Waqar Younis scaled the heights, engaged in a constant tussle for one-upmanship.

Those rivalries helped more than they hindered, and Samiuddin emphasises this by quoting Omar Kureishi, for so long the voice of Pakistan cricket, on the subject of Imran and Miandad: ‘There may not have been too much chemistry but when it came to playing for the team, all personal differences were forgotten and each gave hishundred per cent.’

The unquiet ones isn’t just a cricket document though. Some of its finest portions deal with the political and social realities of those times. Kardar, for example, was apparently sent to Bangladesh to remove all traces of Rabindranath Tagore from Bangladeshi literature.

‘To my undying shame,’ Kardar wrote in his memoir, ‘I repeated the brief [to the relevant official] and received the curt reply, “Mr Kardar, I never thought that you will speak the language of a tonga driver of Lahore. How can you think of the English language without Shakespeare and how in the name of God can you think of Bengali literature without Tagore?” I have never felt so small in my life and apologized for the brief I was carrying from the federal government.’

Mahmood, who bowled Pakistan to its first Test wins in India and England—the Oval triumph of 1954 is beautifully described—is the subject of some of the book’s loveliest lines. ‘But it was the blue eyes, sparkling blue eyes as worthy of song and folklore as ol’ blue eyes Frank Sinatra himself, translucent blue eyes that broke even the iciest,’ writes Samiuddin. ‘In 1954, on tour to England, the queen met the Pakistan team in Buckingham Palace at a reception during the Lord’s Test. She is said to have shaken hands with Fazal, then the rest of the team, before coming back to Fazal and asking how his eyes were so blue.’

Those eyes and his dance-floor moves also apparently prompted Ava Gardner—shooting George Cukor’s Bhowani Junction in Lahore—to insist on a twirl at the famous Faletti’s Hotel. Those were vastly different days, before General Zia, the mujahideen and the post-9/11 chaos, and Samiuddin describes perfectly just how central cricket was to the mood of a young and buoyant nation.

‘It quickly came to be that a Test would hold the attention of much of the population, responsible for bringing what columnist Anjum Niaz remembers as a “collective happiness”,’ he writes. ‘The men would go to watch the serious business of sport, as would the women; additionally they kept one eye on their heart-throbs, also decked up as part of an unsaid, impromptu fashion parade.’

There is so much here that the average Indian fan will be able to relate to, especially the game’s gradual shift away from the big metropolises: ‘Of the 140 Test cricketers since the 1978–79 India series (until October 2014), just under half, sixty- nine, would be born in the country’s two biggest cities. Only eight cities and towns had contributed to the entire list of Pakistan-born Test players until that India series; after it, as many as twenty-seven different towns, cities or villages (and still counting) could feel proud of having given birth to a Pakistani cricketer.’

They can also relive the pain of that April afternoon in 1986, when Miandad’s last-ball six set in motion a decade of unrelenting Pakistani supremacy. Samiuddin describes a train journey with Chetan Sharma, who bowled the delivery, and goes on to say: ‘That one shot was like a mince grinder in reverse. Into that burst went every strand of the transformation Pakistan had undergone over the preceding decade and a half; the emergence of a superstar core, the spread of the game, the growing power of the player, the administrative vision of Abdul Hafeez Kardar and Nur Khan, the birth of departmental cricket, the rise of TV, more money. One the other side came out one solid lump of a golden age, the most golden age, in fact, Pakistan has ever had.’

And given that the World Cup is almost upon us, how can we not look back at the last time the tournament was played in Australia and New Zealand? With one win from five games and on the verge of elimination, the captain decided to have a few words before they played Australia in Perth. ‘Imran spoke to each player and told them to look inside themselves, to understand that they were the best players in the world. “You,” he asked one, “is there a more talented player in the world than you?” Is there a better fielder than you, he asked another, a better batsman than you? Having roused each player, he ended twenty minutes later with the image on his T-shirt, one that resonated most to him and how he saw himself; a tiger, a Pathan tiger, hunting, warring, surviving.’

There follow delightful anecdotes about how an ill and low-on-confidence Inzamam-ul-Haq was coerced into playing the semi final—he made 60 off 37 balls—and of how Miandad went to him after England had been beaten in the final at the Melbourne Cricket Ground. ‘Now Miandad grabbed Imran by his right arm and yanked him around, the only man in Pakistan who would be so informal with him,’ he writes. ‘Imran was momentarily perplexed but seeing Miandad’s open arms, broke into a broad smile and locked into as warm and full an embrace as he had ever done on a cricket field; the two men in whom this conspiracy was manifest most profoundly, celebrating a triumph built on the will of one and wit of the other.’

That golden age was followed by the Justice Qayyum inquiry into match-fixing and the ‘soft punishments’ handed down. Samiuddin also spares no effort to investigate the recent administrative chaos, the frequent captaincy shenanigans and the unravelling that followed the terror attack on the Sri Lankan team in March 2009.

Some of the most striking passages deal with fast bowling, especially the art of reverse swing, for which Pakistani bowlers were derided until the rest of the world learnt the same skills. Despite not having played a home game in over five years, the team continues to surprise and thrill, in tune with the themes of jazba (passion) and izzat (honour) that the book explores so well.

‘The swings, moods and tenor of Pakistan’s performances seem, for now, unaffected,’ writes Samiuddin in the prologue. ‘The intrinsic physical style too, for both defeat and triumph, remain as always, irreconcilable to the senses; how can something so beautiful one day be so ugly the next? It is forever unique. The world of Pakistan cricket remains. This partial isolation has not changed that unquiet, not yet at least. Pakistan soar, Pakistan plummet, Pakistan and life move on, as it is, as it was; death would it be for Pakistan to go quiet.’

If you pick up just one cricket-themed book this year, it has to be this one.


After Tendulkar: The New Stars of Indian CricketbookscricketIndiaOsman SamiuddinPakistanSoumya BhattacharyaThe Unique Ones: A History of Pakistan Cricket