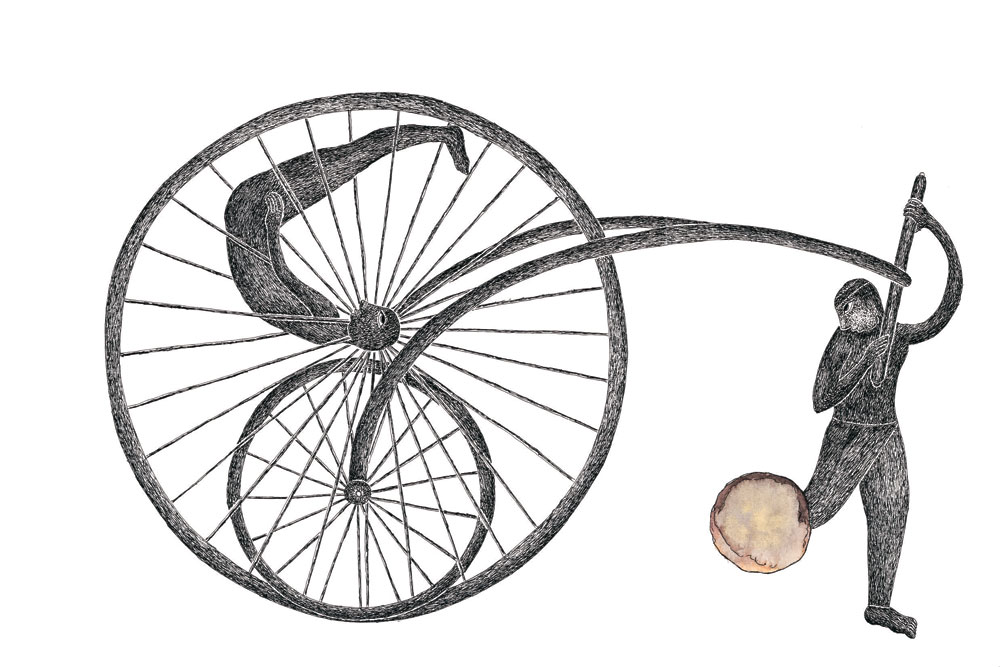 FINDING MY WAY can be seen as a memoir of a Gond visual artist, now in his mid-40s. But that is only one way of looking at this genre-defying book, written jointly by Venkat Shyam, the Gond artist, and S Anand, writer and founder of Navayana, a progressive publishing house focusing on caste and marginalised communities. The book can simultaneously be viewed as a history of Gond painting, an introduction to Gond culture, a subaltern narrative about contemporary India, a critique of modernity, and finally, a work of art itself.

About one-square foot in size, Finding My Way has the look and feel of a coffee- table book because of its shape and appearance. Like many books of this kind, the visuals—illustrations by Venkat— are lush and dominant. But unlike most books of this genre, one cannot casually flip through it. On the contrary, it calls for multiple readings, because the double- stranded narrative, of words and images, is complex. Rendered in black, white and shades of pastel colours, Venkat’s illustrations are both delicate and sensuous. The first time I read the book, I felt I was slowly being drawn into another world, sometimes becoming enveloped in it.

Finding My Way reminded me of many exquisitely illustrated children’s books. It made me wonder why we don’t have more such works for adults. At the same time, this is not a book just for adults: sensitive high school students would enjoy it, and in the hands of an imaginative teacher, it could become a wonderful springboard for concurrently tackling many subjects—social studies, visual arts, writing.

Seen as a memoir, it is a story about how a school drop-out from the Pardhan Gond Adivasi community grew up near a forest in eastern Madhya Pradesh, became an artist after training with his uncle, Jangarh Singh Shyam, in Bhopal, was then forced to fend for himself in the merciless bowels of urban India, survived, and emerged with his own aesthetic vision and worldview.

At the end, he could negotiate the modernity of globalised capitalism— with its art market and international exhibitions, its relentless competition and technological advances that make life easier but also destroy livelihoods. From someone who once plied a cycle- rickshaw and ‘any job… to keep (his) body stitched to (his) soul’, he becomes the owner of an SUV.

Venkat’s life story unfolds in iterations over five chapters, each with a different starting and ending point, each looking back with a differently coloured lens. Each time, new facets of his life and journey get illuminated. Besides Jangarh, the cast of key characters includes J Swaminathan, the artist and visionary who, fascinated by Adivasi visual aesthetics, brought Jangarh and Gond art into the mainstream; Verrier Elwin, the British-born anthropologist who studied Gonds and married into the community; Tokio Hasegawa, a Japanese art enthusiast; and John Bowles, a British collector of Gond art and curator whom Venkat befriended.

Since the tale is largely told from Venkat’s point of view, with Anand acting as his amanuensis, it is also a story about contemporary India from the perspective of someone born into a marginalised community, whom social scientists would describe as ‘subaltern’. Here, the canonical anthropological subject, the Adivasi, becomes the ethnographer who offers a ‘thick description’—to use Clifford Geertz’s term—of modern India. It is a perspective similar to the one in Aravind Adiga’s novel White Tiger, where the narrator is a village boy who becomes a chauffeur, and the Australian film Baba Kiueria, which looks at White society through the eyes of aborigines.

Through Venkat’s eyes, we see, yet again, the barbarism of a society that offers nothing to those who, by the accident of their birth, have few resources to move up in the modern world—a society that, far from being horrified at this deep inegalitarianism, accepts it as the natural order of life. Like the Dalit poet Narayan Surve who could study only until Class II and wrote in his famous poem, Majhe Vidyapeeth (‘My University’), that he had to learn everything in the harsh crucible of life, Venkat drew from his experiences and poured them into his art. ‘I did not learn from school and books,’ he writes. ‘I fished in the river…, stole corncobs, learnt to plough, heard the bana (a Gond instrument).’

The modern world through which Venkat makes his way is one in which the marginalised, including the Adivasis, pay a huge price for the ‘progress’ of the rest of the nation. The practice of ritual human sacrifice carried out by the powerful, as described in the Vedas and by a Portuguese chronicler of the Vijayanagar empire, continues in a different form, say the authors. Today, we have construction workers who regularly plunge to their deaths from scaffoldings of luxury towers, or Tribals who are evicted from their homelands to make way for dams and other mega-projects.

It is also a world of consumer capitalism in which art has been commodified— a subject that many thinkers have explored. Theodor Adorno, for instance, coined the term ‘culture industry’. Here, we see the whole process from up close in the specific case of Gond art, something that the authors lament. We learn about the aesthetics of Gond art and its social role. We then see how, plucked from its cultural context and ritual function, it becomes an object that can be bought and sold. In the market, it changes in both form and content. Responding to consumer demand, Gond painters also undertake new subjects.

In itself, change is neither good nor bad. On the one hand, it helps Gond artists like Venkat gain a foothold in the market economy. On the other, how does one quantify the loss to the soul and, sometimes, of self-respect that this transformation entails? ‘Can we any longer look at art as a mystical and magical experience?’ ask the authors.

From a society that lives in and by nature and co-exists with the animal kingdom, Venkat travels to a world that is not only alienated from nature and other animals, but ruthlessly exploits both. Talking of his childhood, he says: ‘I goldenly stagnated in the lap of nature. Clear skies, the purest water, the cleanest air. It seemed so perfect that my world sometimes appeared upside down.’ Animals were human art’s first subjects, but ‘what we have today,’ write the authors, ‘is the total cultural and physical marginalization of animals: as pets, as mass-produced food, as caged creatures in zoos, in cartoons and invasive documentaries.’

The story constantly moves between describing this modernity and the Gond world, with its myths, its cosmology and its rituals, and how it interacted over the centuries with caste society, which at some point in history began going by the umbrella term ‘Hindus’.

Yet the authors do not idealise Gond life, pointing out some of its darker aspects: ‘We may not build dams by sacrificing humans or by displacing thousands, but there is no idyll or utopia… Women suspected of sexual infidelity are… brutally punished.’

This is the sort of nuance that the narrative lacks in a few places. Talking about the state’s plan to interlink rivers, the authors write, using the language of hyperbole instead offering a strong argument: ‘It is like infusing all blood types into all bodies. It is mass murder.’ Also, the discussion on Gond aesthetics was all too brief. The pace sags in parts.

In the final chapter, the authors talk about their friendship and give us glimpses of how they collaborated to produce this book. But it would have been nice to have more details about this. I was often left wondering whose views were being expressed and whether the authors disagreed about certain issues and to what extent.

Ultimately, though, the perfect is the enemy of the good, and the book’s rewards far outweigh its flaws.