This graphic novel is a satire on modern life, and what greed does to human beings and all that comes in their way 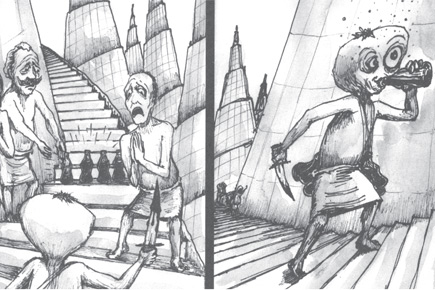 This graphic novel is a satire on modern life, and what greed does to human beings and all that comes in their way


Moonward is the story of our times, of all the unhealthy and selfish ways in which we use our planet, and each other, for our mercenary gains. It’s a brilliant graphic novel that tackles everything consuming the earth, from consumerism, capitalism, GM crops to urbanisation.

Appupen starts from the beginning—in Halahala, a primordial world of ancient trees and strange beasts. It’s a world in danger of extinguishing its life force, where the weak live in fear of being hunted down by creatures stronger than themselves. The story later takes us to the urban jungle human beings built for themselves, a world no different in the viciousness with which it operates, where the weak live at the mercy of the strong, and where it takes deceit, cunning and ruthlessness to survive.

It’s the story of Ananthabanana, a wanderer who reaches the valley of Oumbe and by a twist of fate becomes the ‘Prophit’ of its creatures. And the hand of God leads him to his destiny: the pursuit of money, and power. From then on, Ananthabanana becomes the Mahanana of Oumbe, Nana for short.

Ruthless in his ambitions, Nana builds an empire for himself by usurping and marketing everything magical in the natural world, abandoning at every step the people who aided his rise. When he exhausts nature’s resources, a mad scientist gives him the key to the future—lab-grown seeds that produce crops overnight, crops that can protect themselves from birds and bees—an inversion of nature itself.

A satire on modern urban life, the brilliance is in the telling of this story of Nana, and the unfortunate souls who cross his path. It’s a book of few words, the artwork enough to show the greed, resilience, hope, fortitude, dreams and despair that drives the actions of human beings. Appupen truly is an artist and storyteller worth looking out for.