The Flow of Time

Rivers that run through the cultural history of India 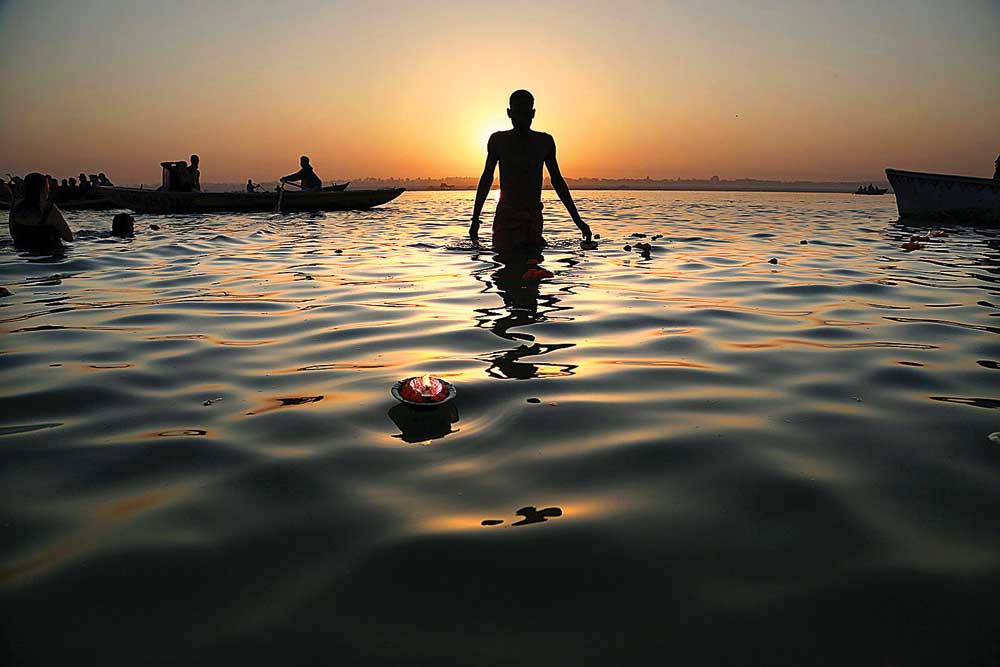 THE GANGETIC PLAIN forms the core of India’s civilisation. It has given birth to the corpus of ideas that form the canvas of India’s identity today. The cities by the banks of the river Ganga—from Prayagraj to Varanasi—have been amongst the holiest within Hinduism for over two millennia. Control of the Gangetic plain has traditionally been the axis upon which empires have solidified their presence in the Indian subcontinent. And perhaps most importantly, its virile and arable land has begotten masses of people, and ensured it remains one of the most potent hotbeds of human settlement the world over.

The Ganga also illustrates the strange incongruities of modern India. It consistently ranks amongst the most polluted rivers in the world. With more than 2,800 million litres of sewage unloading in the Ganga every day, experts have rendered it unfit for touch let alone consumption. And yet, as the largest ever Kumbh held in 2019 at Prayagraj exhibits, a 100 million devotees can happily disregard such scientific consensus and take a dip in the Ganga to rid themselves of sins. For them, as for millions of others, Ganga’s legendary ability to purify the soul is immutable.

This moral and environmental salience of the Ganga basin, along with India’s other waters, is given treatment in two recently released books—Ganga: The Many Pasts of a River by Sudipta Sen; and Unruly Waters by Sunil Amrith.

Both Sen and Amrith are veteran historians with a foundation in modern Indian and Asian history. Sen’s previous forays include well-received books on East India Company’s formative years on the Indian subcontinent, and the effect of the Raj on Britain and India’s conception of themselves. Amrith, on the other hand, has traditionally focused on histories and narratives of subaltern actors—most specifically in an acclaimed work on the experience of Bengali migrants during the age of colonisation of South and Southeast Asia.

Sen in Ganga attempts to tie the symbolic, metaphysical and practical importance of the river Ganga in India’s past into a cohesive narrative. And he mostly succeeds at that.

For India, Ganga is a river that exists both in reality and in legend. Its origins could be described as a product of the melting of the most sumptuous glaciers in the tallest of peaks. Or, as Sen recounts, the origins of Ganga may also be understood through the legend of Bhagiratha of the Suryvanshi Kshatriya Clan of Ayodhya (Ramayana’s Lord Rama would eventually be born to this same clan). To atone for the sins of 60,000 of his forebears, Bhagiratha petitioned both Lord Brahma and Lord Shiva to allow for the descent of the Ganga so that she may help the souls of Bhagiratha’s ancestors attain salvation. Eventually Goddess Ganga would descend through the matted locks of Shiva and wash away the sins of Bhagiratha’s forebears.

Variations of Bhagiratha’s legend reside in the many versions of Ramayana and Bhagwat Purana strewn across the Indian subcontinent. For Sen, this represents Ganga’s perseverance in the religious and cultural psyche of India.

Sen, thereafter proceeds to chart a geopolitical narrative of Indian history that serves to exhibit the Gangetic basin as the nucleus of temporal power within India. The Vedic Civilisation, whose texts and practices form the essence of Hinduism, sprouted on the Gangetic basin at the dawn of the Iron Age (approximately 1200 BCE) in India.

By 500 BCE, the Ganga basin could provide enough of an agricultural surplus to support burgeoning kingdoms. These are the Mahajanapadas of the Buddhist sources such as Avanti, Kosala, and most famously Magadha.

This also suggested the increasing complexity of urban life, which facilitated Buddhism’s rise as the intellectual challenge to Brahmanism. As Sen notes the Buddhist ideal of the utopian city Ketumati drew inspiration from a moral political order ‘resolutely centred on the cities and city-states of the period of the first great urban resurgence of the Ganga plains’.

Given the fertile bounty and the legendary status of the Ganga, controlling the Ganga basin was desirous for any party with imperial pretentions in the subcontinent. Between 300 BCE and 800 CE, the Ganga plains saw the rise and fall of imperial powers—all using the normative legitimacy provided by the control of the Ganga and the revenue provided by its fertile lands as the basis of incursions into the rest of the subcontinent. First came the Mauryan Empire, wherein Emperor Ashoka did much to promote Buddhism across the subcontinent. After their decline, the stringently Vaishnavi Gupta dynasty inherited their imperial mantle by uniting the Ganga basin (and beyond) through the military dynamism of Samudragupta. The Guptas were then followed by Harshavardhana, who built the cosmopolitan capital of Kannauj on the banks of Ganga.

Ganga and Unruly Waters reveal the tension at the heart of India’s relationship with its waters. Where once the water shaped India, its people, its religion and its cultures, modernity has now allowed India, in turn, to shape the waters

Throughout this political narrative, Sen repeatedly highlights how ‘the waters of the Ganga became an indispensable ingredient in the sumptuary rituals of kingship.’ Buddhist coronation rituals would insist on Ganga water being poured on the king through the conch, whereas Vaishnavite coronation rituals would see kings bearing the makara, the vehicle of Goddess Ganga. Harsha, even held his coronation as Maharajadhiraj at the ‘confluence of Prayag,’ suggesting immense belief in Ganga’s symbolic appeal to his feudatories.

Moreover, this belief in the potency of Ganga would extend well past the advent of the Islamic invaders. Zafar Khan Ghazi, an Islamic warlord who invaded Bengal and demolished Hindu temples, bowed to the Ganga, openly noting that ‘only the water of the Ganga was pure enough for the ritual ablution of Muslims’. Similarly, Akbar didn’t hesitate to imbue his imperial credentials with heavy symbolism by building the Allahabad fort at the confluence of Yamuna and Ganga; this even led some Brahmins of Allahabad to speculate whether Akbar had been a Hindu in his previous incarnation.

Yet, in the sagacious exposition of the history of Gangetic Plain, and thus by extension much of the subcontinent, lies the cardinal flaw of Sen’s book. Ganga ends up reading more like John Keay’s India: A History than Diana Eck’s India: A Sacred Geography. Its narrative structure, which begins with India’s prehistory and ends with colonial India, means that Ganga repeatedly loses thematic focus. If Sen’s ultimate objective was to present the temporal and spiritual symbolism of Ganga as evidenced through India’s history, then the book repeatedly deviates from it through lengthy digressions on India’s political history. And yet, this lack of focus is hard to complain against since much of what Sen writes is exceedingly interesting and deeply referenced.

Sen’s book ends at the advent of the British colonial state realising, in the tradition of subcontinental empires preceding it, the practical and symbolic importance of the Ganga basin for the whole of the subcontinent. Amrith’s Unruly Waters takes the baton from there and distils the outcome of the modern Indian state’s efforts to rationalise and control these very waters. With the exception that Unruly Waters does not restrict itself to the Ganga basin but rather considers it as an organic cog in a continental-wide climate system that counts as its components the seas, the wind currents and the impulsive Indian monsoon.

Therefore, as Amrith writes, Unruly Waters is about ‘how the schemes of empire builders, the visions of freedom fighters, the designs of engineers… have transformed Asia’s waters over the past two hundred years.’

A central problem that the British, again in the tradition of previous empires on the subcontinent, faced was that agriculture in India was effectively a bet on the monsoons. A few years of drought, such as during the late 1870s in the Deccan or 1890s in Bundelkhand, would mean famine. Not only did this mean millions perishing, but it also affected the balance sheet of the colonial state. For the British state, obsessed with increasing revenue, this meant that water had ‘to be stored, possessed, harnessed and put to work’.

Essential to this were the building of dams and canals for improved irrigation. For Amrith, three efforts stand out. One, the Godavari barrage built by Arthur Cotton to promote irrigation in the Godavari basin. The result has been a success as the Godavari basin has become the rice bowl of India; even today farmers in the basin revere the Englishman. Two, the construction of the Ganga canal, spearheaded by Proby Cautley, Cotton’s rival and counterpart in the North. Cautley’s aim was to feed the traditionally dry Doab region between the Ganga and the Yamuna river. And lastly, the creation of canal colonies in Punjab, which shifted the locus of Indian agriculture from the Ganga basin to Punjab.

The endeavour to control nature also meant a profound data-driven effort to understand the Indian monsoon and its varied precipitation. Questions such as why certain years lack rainfall altogether or why precipitation varies wildly district by district began to be examined. Leading British experts and autodidacts such as Henry Blanford, John Eliot and William Hunter led the way in creation of a data gathering and data analysis infrastructure culminating in what is now the Indian Meteorological Department.

This fascination with technology and industrialism as a way to control and enhance India’s water bounty has been carried on by the Indian state post-Independence. Particularly in its pursuit of gigantic dams—Jawaharlal Nehru’s “temples of modern India” — such as the Bhakra-Nangal Dam on the Beas River and the Nagarjuna Dam on the Cauveri River.

But Amrith ultimately ends his tome on India’s tryst with nature on a pessimistic note. While the efforts to refashion the subcontinent’s waters have finally rid India of famine, the millions displaced due to giant dams, rapidly depleting water tables and chronic change in climate due to greenhouse gas emission means that ‘this stunning expansion in food production was achieved in a way that cannot be sustained.’

Ultimately, both Ganga and Unruly Waters reveal the fundamental tension at the heart of India’s relationship with its waters. Where once the water shaped India, its people, its religion and its cultures, modernity has now allowed India, in turn, to shape the waters. The waters that have traditionally been considered sacred and given India its ancient identity are also now considered means to an industrial end, which may mean giant hydroelectric dams powering factories but also the dumping of sewage.

The ecological costs of widespread modification of water geography means that natural ecosystems and pilgrim trails built over countless millennia of evolution and custom face permanent destruction. At the same time, however, India’s needs to harvest the fruits of better irrigation and industrialisation for the benefit of its people cannot be ignored either. How India balances and negotiates between these two opposite pulls shall define its journey in the 21st century.