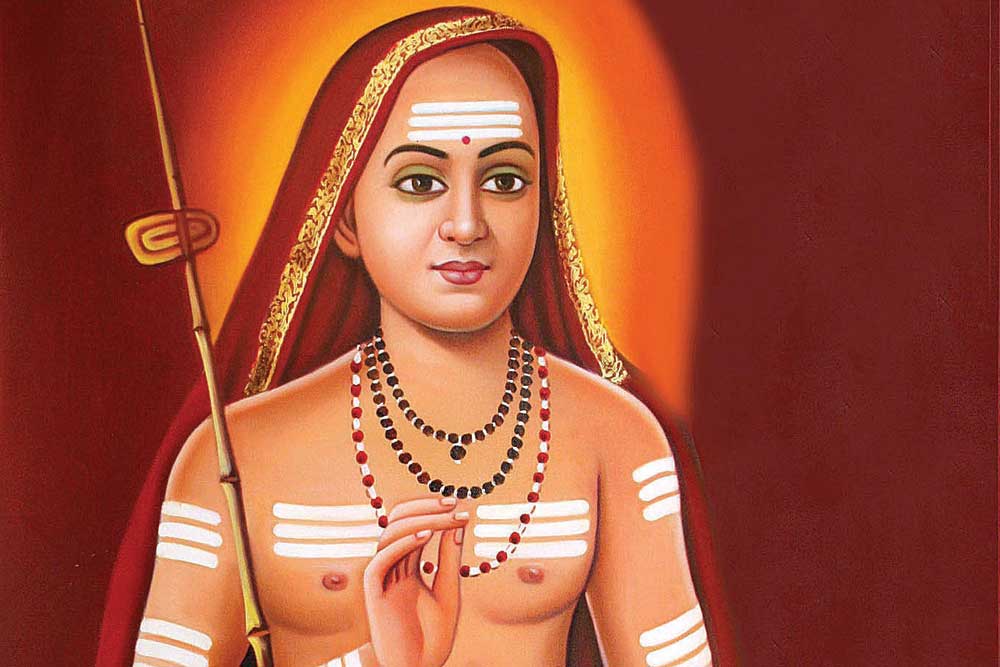 HE WAS AN extraordinary young man. He left home at the age of eight and was dead by the age of 32. In the intervening period he produced commentaries on the Upanishads, Brahmasutras and Bhagavad Gita, beautiful poetry to the gods, and treatises on Advaita. He travelled all over India, meeting scholars, propagating his revolutionary ideas, and establishing monasteries or muths in the four corners of the country, proving this was the land of Sanatana Dharma, long before the British named it India. He was known as the Shanmata Sthapana Acharya, for he united six quarrelling cults— Shaiva, Vaishnava, Ganapatya, Shaurya, Kaumara and Shakta—under the head of Sanatana Dharma. He established five muths in Dwarka, Badrinath, Puri, Sringeri and Kanchipuram which have preserved his teachings and philosophy.

Adi Shankara was born to a Namboodri couple, Sivaguru and Aryambal, in Kaladi, modern Kerala. Sivaguru died when Shankara was a baby. The young boy’s mind was always on sanyas, but his mother did not wish to lose her only son. One day, when an eight-year-old Shankara was bathing in River Poorna, his foot was caught by a crocodile. Shankara begged his mother to give him permission to assume sanyas, failing which he was in danger of death. When his mother gave her consent, the crocodile released Shankara, who could now become a sanyasi and leave Kaladi in search of a guru. This was the first of many miracles in his life. He left for Central India where, on the banks of River Narmada, he met Guru Govinda Bhagavatpada. Shankara completed his apprenticeship by the age of 16, learning the Vedas, Upanishads and Brahmasutras. Thereafter, he left for Benares to expound the Vedanta and write his commentaries on the Gita, Upanishads and Brahmasutras.

A little-acknowledged fact is Shankara’s total rejection of caste. At Benares, he asked a Chandala to move off his path. In reply, the Chandala asked him who he was asking to move away, the body or the soul. Amazed, Shankara fell at his feet, composing the famous Manisha panchakam which rejects caste system. Adi Shankara was a revolutionary who broke with the social norms of his times.

At Mahishmati (in modern Madhya Pradesh), he had a famous debate with Mandana Mishra, an exponent of Poorva Mimamsa, according to which material existence is endless and there’s no liberation. The purpose of the Vedas is to perform rituals for achieving good karma. Shankara rejected rituals. After 18 gruelling days, Mandana Mishra acknowledged defeat and renounced the life of a householder for the life of a sanyasi.

He stopped animal sacrifice wherever he went. At Kanchipuram, he stopped it at the ancient temple of Kalikambal and persuaded the king to build a new temple for Kamakshi, the Goddess with eyes of love. He stopped sacrifice in the Pashupatinath Temple at Nepal, Chamundi in Chidambaram and in many others.

Shankara visited the Sharada peetha, now an abandoned temple in the village of Sharada on the Neelam River (now in Pakistan-occupied Kashmir). It was a centre of learning and one of the 18 Shakti peethas. In 1030 CE, the Muslim historian Al Baruni visiting Kashmir describes a wooden idol of Sharada Devi, later destroyed by marauding Islamic armies. Kashmir was once called Sharada Desh after this temple and Sharada Devi was Kashmira Puravasini, while Sharada was the native script. Adi Shankara was given the right to sit at the Sarvajna peetham (‘throne of wisdom’). He composed the Prapanchasaara, in praise of goddess Sharada Devi. The original wooden image of Sharada Devi at Sringeri in Karnataka is supposed to have been brought south from Kashmir by Adi Shankara.

Shankara spent his life wandering around India, preaching Advaita Vedanta, a doctrine that identified the individual soul with the Supreme Soul. He held discussions with eminent pandits. Reinforced by Vedantic texts, he destroyed the distinction between the individual soul and the Supreme Soul. He was a great debater who used logic to establish the superiority of Advaita over other philosophies. He asserted that the eternal, impersonal Brahman was the only Ultimate Reality and the phenomena of the Universe are due to the power of maya. The spirit of man, said Shankara, is identical with the Supreme Spirit and our sufferings are due to our failure to realise this identity. He who has achieved this realisation can attain moksha. One of his chief doctrines was that karma (work) and upasana (worship) are ancillary to jnana (knowledge).

Adi Shankara build up a reputation for logical reasoning, which has not been surpassed in the philosophical writings of the world

One day Shankara received a message that his mother was ill. He rushed back, but the orthodoxy refused to permit a sanyasi to perform his mother’s funeral rites. Shankara cut the body of his mother into four pieces and cremated her in a corner of the compound of his house. Thereafter, the local ruler passed an order that henceforth all Namboodris would have similar funerals.

When did Shankara live? There is no concrete answer. He lived in a period when Sanskrit was still the lingua franca. 509 BCE is the astronomical date corresponding to that maintained by the muths. 788 CE is the modern historical date. He mentions the Tamil poet Thirugnana-sambandhar, who lived in the seventh century, so he is likely to have lived around eighth century.

Adi Shankara built up a reputation for logical reasoning, which has not been surpassed in the philosophical writings of the world. He established the philosophy of Advaita or non-duality, described as one of the most unique and supreme achievements of Hinduism. The main features of his philosophy are the affirmation of samsara or the succession of births and deaths conditioned by karma; the relativity of phenomena in the context of the Supreme Soul; that the individual and Supreme Soul are one; and that truth is a direct realisation, summarised in the words tat tvam asi (‘thou art that’).

He was the author of beautiful poetry like the Soundarya Lahari, where he invoked the Mother Goddess; Atma Shatkam, where he defines the Supreme Soul; and Kanakadhara Stotram; in praise of Goddess Lakshmi and Dakshinamurti stotram, where he invokes Shiva who is supreme and all-pervading.

The Padma Purana, a Vaishnavite work, is critical of Adi Shankara and calls him a prachchanna boudha (crypto Buddhist). Both the Buddha and Shankara freely took their ideas from the Upanishads, but developed their own teachings. The common feature was their rejection of narrow theological obsessions and their insistence on ethics. Shankara included the Buddha among the incarnations of Vishnu. He admired Buddha’s compassion: ‘I worship that spiritual radiance which manifested as the Buddha, who was all-knowing, the conqueror of maya, who was full of mercy and who was adored by those who were opposed to the performance of (animal) sacrifices.’ By supporting the Vedic view of karma, temple worship and domestic ceremonies, he edged Buddhism out in favour of Sanatana Dharma.

Adi Shankara summarised his teachings in four sentences from the Upanishads: Aham brahmasmi, I am the Divine; Ayam atma brahma, This Soul in Brahman; Tat tvam asi, Thou art That; and Prajnyanam brahma, Knowledge is Brahman. Shankara’s death was as mysterious as his life: he disappeared as he was chanting aham brahmasmi.

(Nanditha Krishna is the editor of You Are the Supreme Light: Life Lessons from Adi Shankara | Aleph | Pages 144 | Rs399)