The possibilities of the occult in fiction 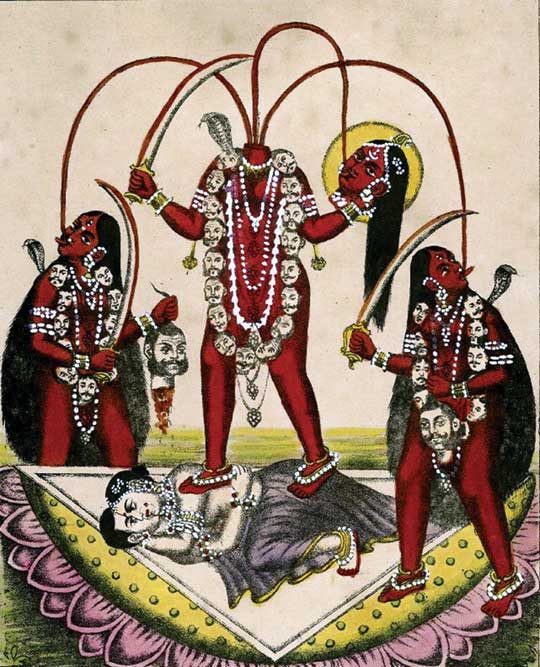 IN THE CLIMAX of Cult of Chaos, the first novel of my tantric fantasy series ‘Anantya Tantrist Mystery’, the protagonist Anantya and her teacher, Dhuma, an aghori who lives in a cemetery, embark on a complex tantric ritual to call upon a charnel goddess, Shamshana Kalika, to the human plane. The ritual called Shava Sadhana requires Anantya to sit on top of a corpse on a full moon night. I first came across this dramatic ritual in The Calcutta Review Volume XXIV written in 1855. In true Victorian Gothic style, the text explained that the sadhak, or the one who meditates, sits on top of a dead body, preferably a corpse of a chandala who has died a violent death, on a full moon’s night, so as to gain command over impure spirits like danavas, betalas, bhutas, pretas and other paranormal goblins.

While researching this scene, I sat on top of a corpse, all night, in suffocating darkness with Anantya. We touched the cold, clammy flesh of the swollen corpse and we felt blood pounding in our veins and hearts. Sitting on that corpse, waiting to connect with powers beyond the human consciousness, made me realise the ultimate truth of all human lives: That the day shakti (alternatively meaning energy, prana, life, or soul) stops coursing through our bodies, we will cease to exist and maggots will consume the bodies we call our home. This relationship with death and life, expressed in such a dramatic, dreadfully mesmerising way, stays with me even three years after I wrote it.

Rituals like these are the reason perhaps why tantrism is misunderstood by outsiders. According to Georg Feuerstein in Tantra: The Path of Ecstasy, the verbal root in ‘tantra’, tan, means ‘to expand’, tantu means a thread or a cord. Tantra then is a web, a system, a ritual, a doctrine or compendium that expands jnana or knowledge and wisdom. In early Vedic times, everything was called a tantra, be it actual sciences like agriculture, cattle-breeding, distillation, iron-smelting or experimental ones like alchemy, medicine, embryology, and physiology. Tantrism was an individual’s quest for science, spirituality and the supernatural. The aim was to attain siddhi, a spiritual quest for liberation, enlightenment, or, in a worldlier sense, a search for extraordinary powers or paranormal abilities.

The power of tantrism lay in its democratisation of knowledge. Anyone, be it lower caste, tribals or women, could become adept at it. This soon led to a conflict with the Vedic philosophy which preferred structure, the varna and patriarchal systems. So tantrism began to form around the other, the subaltern, the negation, the non-Vedic, the one outside social mores.

In a way, this push to the edges of the society freed tantrism as a science of its moral and ethical shackles. Tantric practitioners, in their quest to understand and be one with prakriti, or nature, pushed the acceptable boundaries using methods that were considered sinful, immoral, shocking, or abnormal by conventional Vedic society. The idea was to shock the human consciousness out of imbibed social behaviours and morals and achieve a state of infancy. Ritualised sexual intercourse, aphrodisiacs, alcohol and meat, as well as necromantic rituals, eating excreta and drinking urine and blood were included—all symbolising freedom from social habits. This idea is perhaps best exemplified in the iconography of tantric goddess Chinnamasta, who holds her own severed head in one hand and a scimitar in the other, as she stands on top of a divine copulating couple. Jets of blood spurt from her bleeding neck and are drunk by her severed head and two attendants. In tantrism, blood is a symbol of life. The image, though shocking, implies the goddess nourishing her devotees with her shakti.

The push to the edges of society freed Tantrism of its ethical shackles. Trantrik practitioners used methods considered immoral or abnormal by conventional Vedic society

Unable to understand this symbolic, outrageous aspect of tantrism, mainstream society further vilified tantrics, shunning their rites, looking at them with disgust. Centuries of storytellers, imaginations and half-truths build upon this, till what remained in anyone’s mind when the word ‘tantric’ was whispered was jaadu-tona, black magic, or people who were power hungry, ruthless and inherently evil. Like the Chinnamasta symbol, actor Amrish Puri exemplifies this modern image of a tantric in movies like Naagin and Indiana Jones and the Temple of Doom. From a scientist or a philosopher, the tantric had turned into a black-choga, rudraksh-wearing black magician, an enemy of society, who hollered and danced in front of a larger-than-life sculpture of goddess Kali, did disgusting blood magic, sacrificed humans and animals and inhabited dark spaces like caves or burial grounds.

Both this occult image and the philosophy that preceded it inspired the ruthless fantasy world that Anantya Tantrist lives in. While the popular imaginations of tantrism provided me with the world of ambitious tantric clans, fighting each other for power, the tantric philosophy of shakti wove itself into the magic-principles of the world. Everything runs on shakti and tantrism is the science of harvesting that shakti, as Anantya explains, be it through sacrifice, mantras, or through ritualised sex. Fantasy world-building would be empty without supernatural creatures, which I found in the epics, folklores and oral stories of our myth-rich lands. From rakshasas who have the power to turn invisible and move through planes, to dasyus, bat-like creatures who live in caves and yalis who are part lion, part elephant and part something else.

While building the world of my books, I consciously tried to make tantrics part of the mainstream. Instead of living in secret cults and shadows, tantrics have been announced to the world. They run an efficient system controlling the supernatural population in tandem with the Indian Government and have their own council, police and justice systems. Because tantrics have all the power, the supernaturals are the new tribals, the subalterns (who are ousted from forests and pushed into underground city ghettos, to live their lives in poverty, and are forced to buy expensive maya potions from tantrics) who hide themselves from humans. The Matsya Curse, the just-released second book of ‘Anantya Tantrist Mystery’, sees a supernatural tribe, the Nishadas, being used to provide immorality to the few rich socialites in Delhi. The supernaturals in the world are the new downtrodden. Them and the women.

Ambrish Puri exemplifies the modern image of a Tantric in movies like Indian Jones and Temple of Doom. The Tantric had turned into a rudraksh-wearing black magician

The other day, someone messaged me on Facebook, wondering why the protagonist of a tantric fantasy series was a woman. According to him, tantrics are all males; women can only be channels of shakti for the male. He wasn’t incorrect. Tantric texts, without exception, speak to men urging them to worship women, approach them with reverence, purity and devotion so they can raise themselves to the standard of the female. Some like Sahajiyas even believe that the man should transform himself into a woman. Becoming a woman or one with the supreme woman, Shakti herself, is the ultimate goal for a male tantric. But even though the shakti, the energy or magic, belonged to women, there is no mention of women themselves using it in any of the tantric texts.

In the History of the Tantric Religion, a seminal book written by scholar NN Bhattacharyya, I found an answer which was to tell me more about Anantya and the philosophy she symbolises. ‘Though in modern times, Tantra has become male-dominated, there is reason to believe that once it belonged to the females,’ writes Bhattacharyya. Quoting ancient texts, he redefined the ‘vama’ in ‘vamachara’ to mean not ‘left’, but ‘woman’. From there, much like my detective, I looked out for references and found that every text circumstantially mentioned yoginis, variously named tantra-yoginis, or sadhikas, female shamans or even witches. They stood in the shadows, as spectators to an elaborate tantric ritual, as goddesses being worshipped, as sex-aides to males in their quest for power.

Soon a parallel philosophy emerged, run by powerful educated women, who used tantrism and the shakti within them to aim for higher spiritual quests. I had found my subaltern, the new tantric, considered an outcaste by even the original outcastes themselves. It was exactly here that my protagonist, Anantya emerged. She is born in Banaras in a conventional tantric ashram, trained in ritualised sex to aide male tantrics attain shakti. She suffers abuse, fights and leaves this limited life choosing to travel into the shadows, embracing the art of occult herself, tapping into the shakti troves within her female body.

In Anantya’s world, as in ours, she’s a threat, an illegal entity, an abnormality. It’s a new conflict, not between Vedic and Tantric philosophy, but an eternal one between prakriti and purush, female and male, yoginis and tantrics that is played out in the third book of the series which I’m currently working on.

A tantric image of Kali sits on my study table, as I write this. In it, Kali, prakriti or nature herself, stands fierce, naked, full breasted, full of life, astride the prostrate dead body of her eternal partner Shiva, the purusha , with ashen skin and an erect penis, infusing the half-dead body with her life or devouring its life, however you wish to see it. The image, which I bought in Kamakhya Devi Temple in Guwahati, reminds me every day of yoginis, female power, deified and suppressed, forgotten by a history written by men, though the dark echo of their presence remains like a smear on human memory.

Somewhat like the forgotten ruin of the Chausath Yogini Temple sitting on top of a hill in Madhya Pradesh which is shaped in the form of a yoni, or vagina. Not much is known about who were the women who worshipped there; the sculptures have been rooted out, replaced by Shivlings. But the temple is said to have inspired the unique circular architecture of the Indian Parliament, the seat of power of men.

Shweta Taneja
Shweta Taneja is a fantasy author. Her latest novel is The Matsya Curse, ‘an Anantya Tantrist Mystery’