An empathetic account of the history of conflict in Kashmir 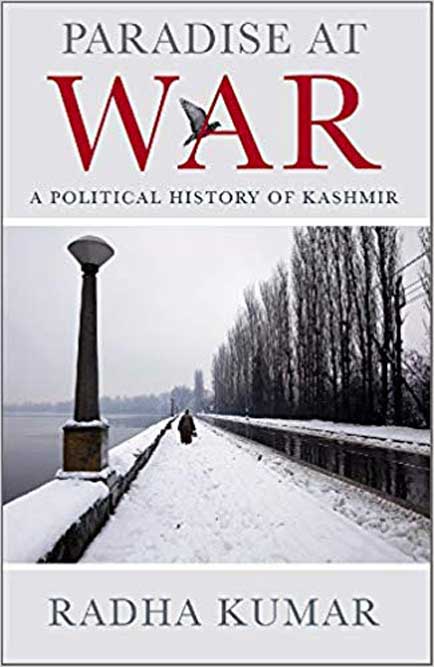 There is a festering wound in the periphery of South Asia that directly impacts the core of the region. In this narrative history of Kashmir, Radha Kumar unravels the relationship between knowledge, power and the Kashmiri subject in modern India and clearly lays down the historical forces that have shaped this identity and relationship. Paradise at War: A Political History of Kashmir, opens with a quote from a Kashmiri political scientist, ‘You cannot discuss Kashmir, or Kashmir conflict, without starting with history.’ Taking a cue from here, Kumar in an attempt to understand the conflict and offer policy-oriented recommendations traces Kashmir’s history from the time when Kashmir is referred to as ‘sacred geography’ in the Puranas to the most recent accounts of the conflagration of violence—the 2016 uprising.

Located in the geopolitics of the region, the conflict in Kashmir has seen phases of extreme violence as well as brief interregnums of peace with ‘state pusillanimity at best and authoritarianism at worst.’ In the period of intense conflict the piqué of the people in the Valley plummeted as a reaction to the mechanisms employed by the repressive arm of the state—the army. It was during the Manmohan Singh government that Kashmir entered the phase of peace from 2004-2008. Singh’s predecessor Atal Bihari Vajpayee had also ‘invested considerable political and personal assets in his Kashmir policy and had acquired large credibility in the valley with his 2000-01 talks initiative and the famous phrase ‘insaniyat ke daire mein’ (within the purview of humanism). From silencing critics within his party (the BJP and the RSS) to winning the trust of Pakistan’s then President Pervez Musharraf, Vajpayee had achieved several milestones in pursuing the peace process.

Given this record of Vajpayee and building on the process of peace initiated by him, Manmohan Singh asked Vajpayee if he would act as the India government’s special envoy to head the India-Pakistan-Kashmir peace process. Vajpayee’s refusal of the offer began a new phase of Singh-Musharraf commitment to peace. With an increase of institutional contacts between the two countries’ coast guards, border security forces and foreign offices, Singh also made attempts at garnering support from the Kashmiris for the peace process, promising immediate economic and humanitarian aid.

The peace process faced initial setbacks in dealing with the Hurriyat leadership. Nonetheless, the hurdles were overcome by measures like the reopening of the Srinagar-Muzaffarabad route that had been closed since the 1948-49 war. This was a landmark achievement towards the nascent peace process, which was fragile. The challenge came from the militant forces that tried to disrupt the launch. However, the government was resilient and decided to go ahead.

While the book narrates the role of the contended parties, India and Pakistan, it also uncovers the outreach of the extra-regional and international players. In the context of Pakistan’s attempts to ramp up its Kashmir campaign in 2015, Kumar brings into perspective the partisan position articulated by the then-Turkey-dominated Organisation of Islamic Cooperation (OIC). Incidentally, on the sidelines of United Nations General Assembly in New York in September 2015, the OIC had invited controversial figures like Asiya Andrabi, who is referred to as “pro-al Qaeda” and Syed Geelani, the pro-Pakistan Kashmiri leader, to speak on Kashmir, while deliberately ignoring the political leadership or the elected representatives of the state of Jammu and Kashmir. Calling the OIC as a ‘bastion of official communalism’, the author’s assessment seems to be an oversimplification of the politics of identity, which includes assertion and convergence.

The book provides the reader with the critical skills required to understand and analyse the contexts and contingencies of the evolving dynamics of the conflict in Kashmir. An empathetic account of the history of conflict in Kashmir, Radha Kumar, who has been a credible voice of reconciliation, offers practical though limited solutions highlighting the lessons embedded in the mistakes committed by major stakeholders. The book raises a pertinent question, given the diverging and conflicting interests of regional and global actors who have a slim chance of coming to a common solution will Kashmir continue to be a festering wound?