This book offers multiple ways of looking at Apple’s charismatic creator. Of these, expect the appreciative to outlast the gossipy 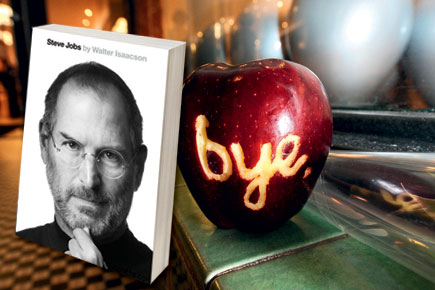 This book offers multiple ways of looking at Apple’s charismatic creator. Of these, expect the appreciative to outlast the gossipy


Evidently, you can lead a fuzzy life even in this day and age of zeroes-and-ones and information. Steve Jobs certainly did. For proof, pick up Walter Isaacson’s Steve Jobs. Like a Cubist work of art, this book has six different sides of its subject, Steve Jobs, staring at you off every other page. Each reader is sure to be rivetted by at least one or two.

Unlike the sadhu who shaved Jobs’ head as a 19-year-old hippie in India of the mid-70s, Isaacson does not snip the story of its messy details. So you have Jobs the babe-and-baby dumper, Jobs the buddy betrayer, Jobs the ‘reality distortion’ist, Jobs the boss from hell… partially assumed to be outcomes of his own abandonment as a baby by his parents. Given away, little Steve grew up in the US an adopted child. He was so sharply aware of it that he’d acquired an otherness complex by the time he was a teenager. Other states of mind would beckon, you could bet, and they sure did. If India gave him his sense of intuition (logic presumably having proved pointless), LSD gave him his sense of profundity (“There’s another side to the coin”).

Steve’s early life recedes in relevance once this book turns to the drama that gave him his heroic aura: his 1985 ouster from his own garage startup, Apple Computer; his quest for his biological parents during his exile; and his 1997 return to rescue Apple against piss-in-your-pants odds. This story touches, fascinates and offers clues on how to reconcile Steve the Dylan fan with Steve the tech visionary. This may sound absurd, but had Steve not stayed up late nights taking Bob Dylan’s poetry apart with his buddy (and Apple co-founder) Steve Wozniak, the world might just have missed the whole idea of ‘computers for the rest of us’.

Isaacson doesn’t say this, and my big grouse is that he doesn’t, but there is enough on record to argue that Steve saw imagination as the flipside of information—real information, that is, with anything knockable knocked out—and in this, he shared a common sensibility with Bob Dylan, an American revolutionary 200 years after Tom Paine. There are hints of it even in Dylan’s musical arc of the late 70s and early 80s, music that Steve seemed to regard—like his Arab ancestry—with a shrug and pinch of salt-n-pepper.

In Isaacson’s book, Steve loved Dylan’s earlier work. Ousted from Apple, he’d found himself rasping along with The Times They Are A-Changin’ over and over. By then, he’d already done enough to knock down the information pyramid, the Big Brother of Apple’s 1984 ad film. With ideas swiped from Xerox, he’d forged the first ever friendly interface between man and machine.

Bill Gates did the rest. With his Windows interface swiped from Apple, he licensed it to computer makers who crunched hardware costs and dropped prices in furious rivalry to outsell one another. The result? Windows won, Gates made billions, Apple got left out of the loop, Steve-in-exile got busy with his cuboid/celluloid dreams, and that seemed like the end of the story.

But Steve was not done yet. Catapulted by admirers back to Apple, he lost no time in firing off his ‘Think Different’ SOS flares. Soon, Steve had reinvented the wheel. He had a hot new interface, the clickwheel, for a hot new device, the iPod. Dylan even did an ad for it pro-bono. Love and theft, after all, was an issue dear to them both. Steve’s hunch was that web surfers would rather pay for their music than steal it—if this were only easier and safer to do. The iPad, with its fabulous finger-swipe operability, has applied the same hunch to other stuff online. Even toddlers love it. And our world of widgets has warped its way forth again.

As always, Steve was ahead of the curve. By the sound of this book, however, he often felt like a laggard. His favourite, he once told Dylan, was One Too Many Mornings, a song about a sort of phase lag. It is easy to imagine he died with his very own iPod by his side (with a pod, you can). It was surely his most personal piece of handiwork, and on it he had almost all of Bob Dylan’s oeuvre, including—for inspiration—

a live 1966 performance in which a Dylan accused of betrayal by a heckler responds with invigorated vocals. Steve Jobs didn’t think he owed his critics any answers either.