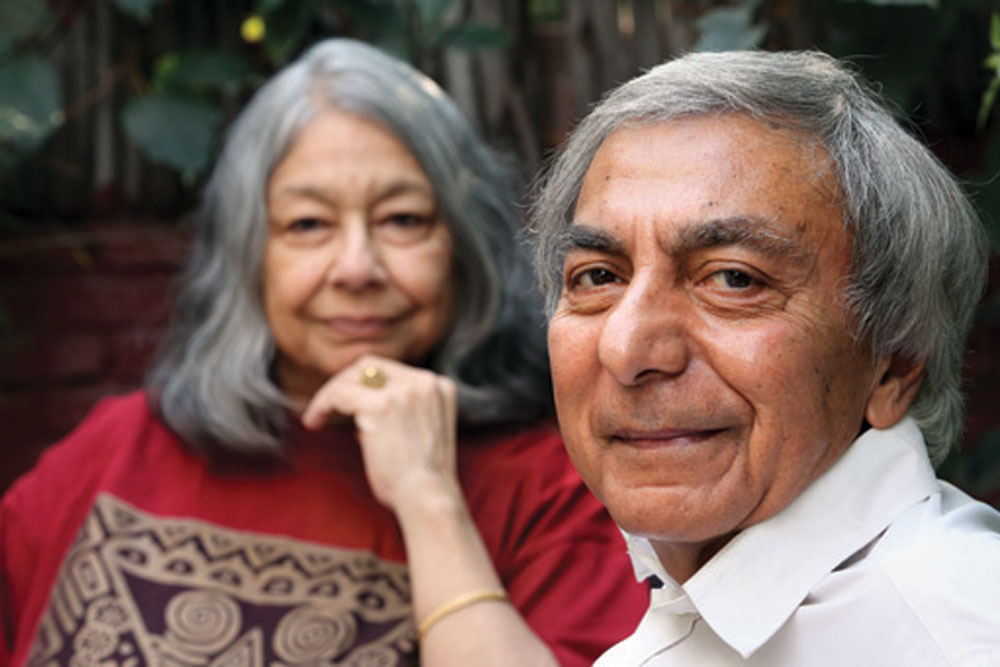 Rahman:
But, soft! what light through yonder window breaks?
It is the east, and Juhi is the sun.
It is my laila, O, it is my jaan!
O, that she knew she were!

Juhi Kapadia appears through the French Window
onto the balcony
Juhi:
O Rahman, Rahman! wherefore art thou Rahman?
’Tis but thy name that is my enemy;
Thou art thyself, though not a Murtaza.
What’s Murtaza? it is nor haath, nor pehr,
Nor arm, nor face, nor any other part
Belonging to a man. O, be some other name!
What’s in a name? that which we call a kamal
By any other name would bloom as fair;
So Rahman would, were he not Rahman call’d,
Retain that dear perfection. Rahman, doff thy name;
Or, if thou wilt not, be but sworn my love,
And I’ll no longer be a Kapadia.

Rahman:
I take thee at thy word:
Call me but love, and I’ll be new baptised;
Henceforth I never will be Murtaza.

Juhi:
Good night, good night! parting is such sweet phal
That I shall say good night till it be kal.
Exeunt

Act 1, Scene 2
A village with a charpoy. In the middle, a boiling kadhai.
Thunder. Enter three Khap Panchayat members, they squat around
the kadhai with hookahs

All:
Hubble-bubble, riot and rubble;
Agni burn, and tension double.

First Member:
Aankh of newt and toe of daddu,
Wool of bat and karva kaddu,
Cobra’s bite and hatred’s sting,
Chhipkali’s leg and ulloo ka wing,
For a charm of powerful trouble,
Like a hookah, hubble-bubble.

All:
Fair is lovely and lovely is fair—
Throw within an outcaste’s hair.
Hubble-bubble, riot and rubble;
Agni burn, and tension double.

Enter Sarpanch of the Khap Panchayat, reclines on the charpoy, his
subordinates press his legs
Sarpanch:
O shabaash! I commend your pains;
And every one shall share i’ the gains.

Second Member:
By the pricking of my thumbs,
Someone badmaash this way comes!

Enter Rahman
Rahman:
Adaab, you ancient gang of meddling nags!
What is’t you do?

All:
A deed without a name.

Rahman:
I conjure you, by that which you profess,
Howe’er you come to know it, answer me
To what I ask you.

Rahman:
Tell me, if your art
Can tell so much: shall Juhi ever
Be my wife—as in my heart
So in my life?

All:
Never! Never! Never!
Till the Ram Mandir is built.
Till like water blood is spilt!
Lest your ghar-wapsi is done
Juhi will wed a Hindu’s son!

Sarpanch:
Our Khap Panchayat must be on guard
To prevent yon case of Love Jihad!
Exit Sarpanch

All:
And if you and you and you be willing
We needs must have an honour killing!
Exeunt Panchayat

Rahman:
Ah, woe is me. My heart doth sink.
Some stratagem I fain must think.
Exit Rahman

Rahman:
To elope, or not to elope—that is the sawaal:
Whether ’tis nobler in the mann to suffer
The slings and arrows of outrageous kismet
Or to take a leaf from Mallya’s book,
And by eloping end them. ’Tis a consummation
Devoutly to be wished..
For who would bear the whips and scorns of RSS,
Th’ saffron’swrong, the Sangh Parivar’s contumely
The pangs of thwarted love, the law’s delay,
The insolence of office?
But elopement calls for no little dough
So to the Sethji I must go! Hey ho!

Sethji:
Naxalvadi Rahman, many a time and oft
In Connaught Place you have given me gaalis
About my moneys and my practices:
You call me kanjoos kutta, running dog
Of filthy capitalism, harami plutocrat
And spit upon my Maybach limousine,
And all for use of that which is mine own.
Well then, it now appears you need my help:
You want one lakh rupees and you say
‘Sethji, we would have moneys:’ you say so;
You, that did fling your thook on my Armani suit
And foot me as you kick a pariah cur
Over your threshold: moneys is your suit
What should I say to you? Should I not say
‘Hath a kutta money? is it possible
A kanjoos can lend one lakh rupees?’ Or
Shall I bend low and like your naukar chaakar,
With humble voice and abject chamchagiri, Say this;
‘Rahman Sahib, you spit on me on Wednesday last;
You abused me such a day; another time
You call’d me sooar; and for these courtesies
I’ll lend you thus much moneys’? Haan ji!
Hie thee, Naxalvadi! Hie thee hence!

Juhi:
Good Sethji, the quality of generosity is not strained.
It droppeth as the gentle rain from heaven
Upon the place beneath. It is twice blessed:
It blesseth him that gives and him that takes.
’Tis richest in the richest. It becomes
The Neta better than his kursi,
The Lala better than his sandook.
A khulla dil belongs to God himself.
Therefore, Sethji, Though retaliation be thy thought, consider
this—
That in the course of taking badla none of us
Should be forgiven.

Sethji:
Khamosh, khamosh! You can have a lakh or two.
In rokra? Or Paytm will do?
Exeunt

Rahman:
Comrades, students, countrymen, lend me your ears;
I come to praise Kanhaiya, not to blame him.
The evil that men do is oft concocted;
The good is buried in doctored videotapes;
So it is with Kanhaiya. The noble Rajnath
Hath told you Kanhaiya was aseditious:
If it were so, it was a grievous fault,
And grievously hath Kanhaiya rebutted it.
Here, under leave of Rajnath and the rest—
For Rajnath is an honourable man;
So are they all, all honourable men—
Come I to speak in Kanhaiya’s favour.
He was a patriot, faithful and just to India:
But Rajnath says he is seditious;
And Rajnath is an honourable man.
When that the poor have cried, Kanhaiya hath wept:
Sedition should be made of sterner stuff:
Yet Rajnath says he is seditious;
And Rajnath is an honourable man.
O judgment! thou art fled to brutish beasts,
And men have lost their reason. Bear with me;
My heart is in the dock there with Kanhaiya,
And I must pause till it come back to me.
Exeunt

All:
Our travails are not now ended. These our actors,
As we foretold you, were all spirits and
Are melted into air, into thin air:
And, like the once seamless fabric of this nation,
The contentious campuses, the gridlocked parliament,
The sectarian temples, the great Republic itself,
Yea, all which it inherit, shall dissolve
And, like this insubstantial pageant faded,
Leave but a wreck behind. We are such stuff
As screams are made on, and our secular life
Is routed as we weep.
Exeunt
Curtain