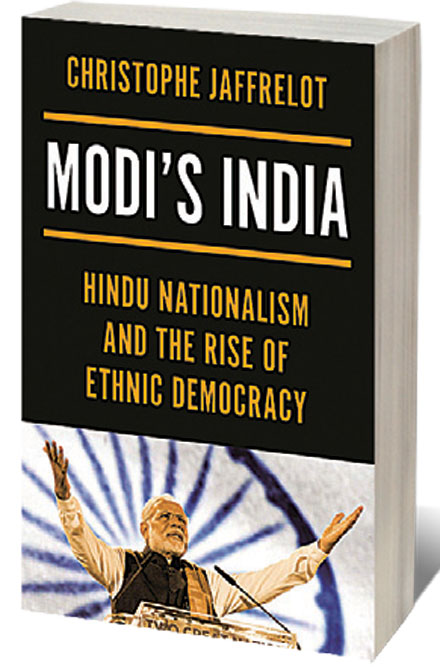 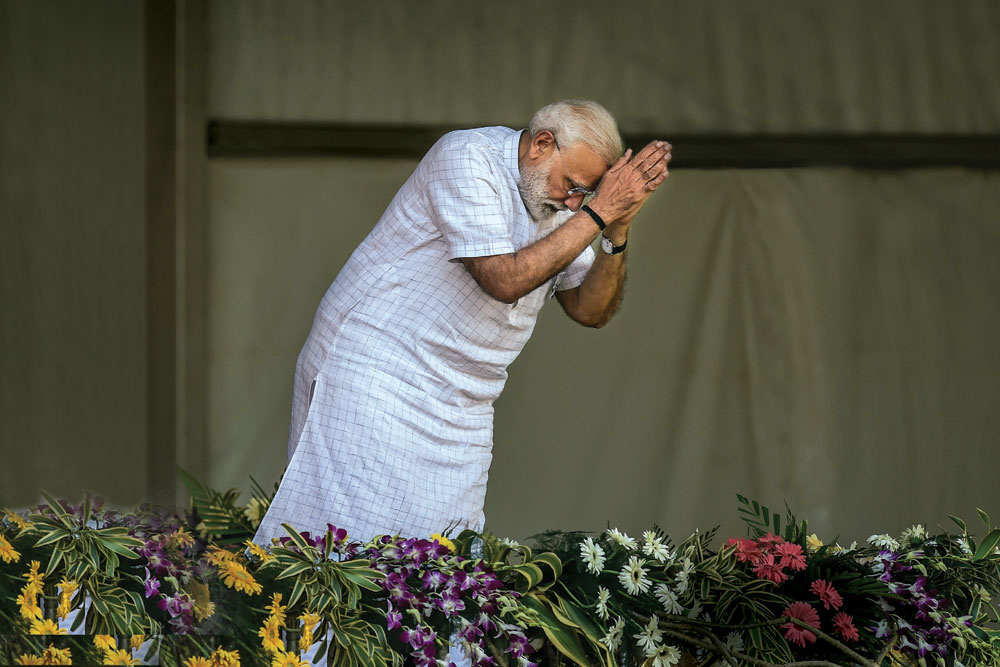 
IF CHRISTOPHE JAFFRELOT is to be believed, India is a Hindu majoritarian country that has turned to electoral authoritarianism and is now a de facto ethnic democracy. If that is true, we might as well go home and watch TV.

But, alas, Indian politics is way too complicated to be simply triaged into a triangle of dreary political camps even if that is what Jaffrelot, a professor of Indian Politics and Sociology at King’s College, London, tries hard to do. He makes a forceful argument along those lines in Modi’s India: Hindu Nationalism and the Rise of Ethnic Democracy (Princeton University Press; translated by Cynthia Schoch; 639 pages; `2855).

The idea behind the book can be summed up simply. India, under the influence of the RSS and the BJP has turned into a Hindu majoritarian country that is in the grip of a toxic variety of nationalism. Muslims have been reduced to second-class citizenship and the majority is so intoxicated that it refuses to see the economic and governance damage done under Narendra Modi’s watch as prime minister. As far as he can see, India is heading to a gloomy future as a non-democracy. To recap, Hindutva—the variety of nationalism in vogue in India—has gripped the country and there is no way out.

If one is to dissect the book, it is important that one step back and understand Indian politics in a more instrumental fashion.

There are two distinct ways to locate the rise of Modi in Indian politics especially since 2014. From one perspective, this can be done by looking at major currents of Indian politics and then placing Modi’s rise within them. The other, more theoretical way, is to analyse voter choice and behaviour. The two can, roughly, be called the “macro” and “micro” of Indian politics.

Viewed from the prism of national politics, six trends that often cross each other in complex ways have determined the march of the BJP under Modi. These trends are: The continuing centrality of Other Backward Classes (OBCs); the upsurge in Dalit assertion; the presence of the middle class as a vocal group; the changes in Muslim politics over time; the regionalisation of Indian politics and, of course, the firm presence of Hindutva on the political firmament.

These six trends create contradictory pulls and pressures on Indian politics. Any party that wants to run India has to figure a way to respond to them and, if not “master” them, at least manage the contradictions inherent in them. These factors kicked in at different times in Indian politics. The OBC assertion began in 1990; the rise of Dalits as an autonomous force can be dated to the early 1990s and the churn in Muslim politics from 2002 onward. The rise of Hindutva is harder to pin down but again, it was an early 1990s phenomenon. In practical terms, each of these trends added a layer of complexity for political managers of national political parties. Until 2014, managing all of them was considered beyond the abilities of a single party, however widespread its footprint may have been across India. The task, or rather the division of labour along the six axes was outsourced to different parties. That was the origin of the expression “federal polity.”

The other perspective to look at Indian politics is from the ground up, leaving aside the six macro trends. Usually, any voter—irrespective of his caste, locality, religion and class—votes along two axes: instrumental and expressive. The instrumental dimension considers outcomes that a voter seeks from a party or a candidate. The voter may choose between different parties by calculating what is best for him in material terms. This is the usual utilitarian calculation of economists. The expressive dimension is more closely associated with a person’s political identity. A person is a “Congressman” because he votes for the Congress; there is no other way for him to assert his identity except by voting for “his” party. “I do X, therefore I am a Xer.” This choice is different from an instrumental political choice in terms of benefits and favours that come to a person from voting.

In all Indian elections, both instrumental and expressive choices are at work. The precise mix is, however, a matter of conjuncture. There have been occasions when the two dimensions have been hard to disentangle. Indira Gandhi’s “Garibi Hatao” campaign was one such mix. In contrast, in the general elections after her assassination in 1984, the instrumental-expressive mix skewed almost completely to the expressive dimension. The interesting thing about Indian politics is the relative instability of the instrumental-expressive mix. This is perhaps the key difference between India and Western democracies. In fact, the history of Indian general elections can be sketched in terms of variations in these two axes. No ideology, no personality, no idea has been of sufficient durability that it could span the entire breadth of India’s electoral history. Of late, right till 2019, the mix has to be constantly redone if power is to be sustained at the Central level.


No ideology, no personality, no idea has been of sufficient durability that it could span the entire breadth of India’s electoral history. Of late, right till 2019, the mix has to be constantly redone if power is to be sustained at the central level

In 2014, it was a special set of factors that enabled Modi to overcome the six macro trends that made it impossible for a single party to form a government until then. If anything, and in contrast to Jaffrelot’s claims, it was an expressly instrumental appeal cast in two clear and simple slogans “acche din” and “sabka saath sabka vikas”. At that time, these were thought to be rhetorical devices and the expectation, especially from the middle class and its intellectual leaders, was for deregulation and further rounds of economic liberalisation that had been stalled a decade.

These expectations were to be dashed soon when Modi chose to go along conventional lines in dealing with economic issues. There was little liberalisation after his failed attempts in 2014-15 to undo the 2013 land acquisition law that many held to be the reason behind India’s stalled industrialisation drive. Other reforms, such as the Insolvency and Bankruptcy Code and the Goods and Services Tax were carried out in due course. But these were hardly the stuff of liberalising factor markets. Many held Modi to be a closet statist rather than a liberal reformer. But for all his political will, Modi could not defy the macro political trends that increasingly consumed his energy for the next six years.

Among all the political issues that Modi has had to confront and the contradictions he has been forced to deal with, Jaffrelot brushes aside all as merely incidental; only Hindutva has causal and explanatory force. It is not clear why Hindutva should be picked above all others merely because the BJP (and the RSS) say they are part of its “ideological core.” Different parties claim different sources of ideological strength but act along lines that are different from their ideological beliefs. Probably the only exceptions to this rule are the Left parties and some regional entities (for example the Dravidian parties and the Shiromani Akali Dal). Throughout his book, Jaffrelot hammers on the issue of Hindutva and little else. The picture that he paints is lopsided and at extreme variance with India’s reality between 2014 and 2019.

It is surprising to note that Jaffrelot is unable to make a distinction between the spread of Hindutva—which is for real—and its ideological depth. The distinction matters if the future of India and the influence of Hindutva are to be evaluated properly. The first thing to note in this context is the extreme shallowness of Hindutva. Most of its key items—Article 370, Uniform Civil Code, and constitutional guarantees to minority educational institutions—are reactions to the Constitution. Only the Ram temple issue stands apart from these concerns and can, perhaps, be described as a “civilisational” issue. The trouble for Hindutva is its “check list” nature: once all these goals are attained, what next? In a democratic polity—and India is democratic, whatever Jaffrelot may say—political ideas need to evolve constantly. One cannot run a country on a set of backward looking promises especially after they have been fulfilled. In intellectual terms, Hindutva cannot run on these issues forever. 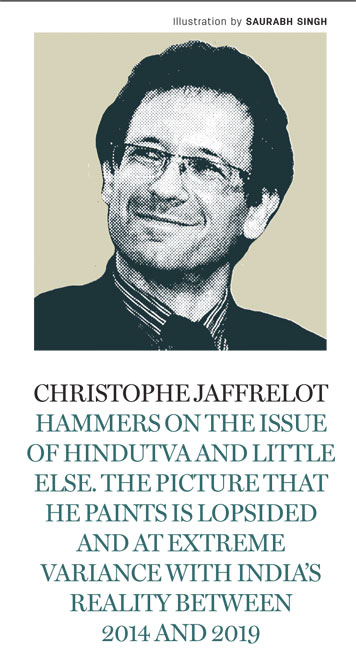 Even the spread of Hindutva is uneven at best. Since 2014, the BJP under Modi has won a number of state elections but has also gone to lose others. Key Indian states like Tamil Nadu, Kerala, West Bengal, Punjab, Andhra Pradesh and Telengana remain immune to Hindutva. Others, such as Jharkhand and Chhattisgarh, where the BJP has been in and out of power can be hardly described as Hindutva territory. If Hindutva were such a potent force, the BJP would not sweat as much as it does on the eve of every election.

In one section of his book, Jaffrelot describes India as a de facto ethnic democracy. Once again, he gets his emphasis wrong even if the potential for the country turning into an ethnic democracy—for very different reasons—remains strong. His emphasis is on the “othering” of Muslims across India. But he ignores the state where the BJP (and not Hindutva) has gained in a spectacular manner: Assam. It is normal for Delhi-based commentators to say that Assam has fallen to “Hindutva.” This bespeaks ignorance of Assam’s politics and its culture. Ask any Assamese and he/she will openly state that they don’t want any “foreigners,” Hindu, Muslim, Bengali or anyone else. If Assam has opted for BJP two times in a row, that is not the victory of Hindutva but the people there being left with no option in the face of a demographic assault. If Assam thinks only the BJP can prevent further demographic damage, can anyone blame it?

Put simply, Assam will be the state where the first shots of ethnic democracy will be fired and that will not be because of Hindutva. There is now a strong demand for reserving political positions for “indigenous” people, the Assamese expression for those who belong there. And on the face of it, there is justice in that claim. But anyone who goes in that direction is immediately dubbed “communal.”

It is hard to classify Jaffrelot’s book as anything else except as a polemical tract. Its heavy reliance on news reports (its 147 pages of notes and references are mostly news reports and commentary from the Indian press) without analysis turns the book into a compendium on that topic. For a book packaged as a scholarly work, the absence of a theoretical framework is glaring. The failing of the book, and its author, is their misplaced emphasis on Hindutva. Had he been less emotional and a bit more instrumental about Hindutva a very different book would emerge. It is a peculiar kind of intellectual myopia that afflicts liberal commentators.