What is it about Ruskin Bond’s work that gives it its extraordinary vitality and luminosity? 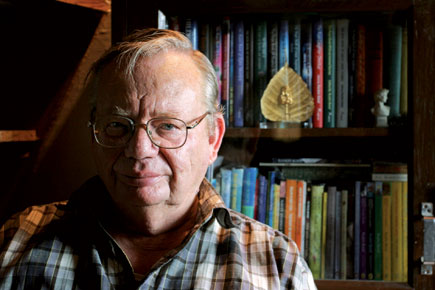 Over fifty years ago, in a world that no longer exists, a young man in India decided that he wanted to be a writer, a novelist to be precise. At the time, if you wrote in English, and belonged to the erstwhile colonies, in order to be taken seriously you had to publish in London, so our would-be-man-of letters set sail for England. The English publishing world of those decades could have been lifted from the pages of a PG Wodehouse or Evelyn Waugh novel. Men (and the occasional woman) from the English upper classes, with plummy accents, would decide the fate of would-be-writers over long, bibulous lunches at their clubs or restaurants like Simpson’s-in-the-Strand, with scant regard for the nuances of profit and loss accounts and, more discouragingly, the work of writers outside their ken. Unsurprisingly, it was a closed world, and one that was difficult to break into. The young man from India would soon discover this, when the rejection slips began to mount. However, there was a chink in the closed ranks of British publishing—a resourceful maverick of Hungarian origin called André Deutsch. The eponymous publishing house he owned, and Diana Athill, the brilliant editor who worked for him, soon became a major force in the London publishing world. They launched the careers of several brilliant ‘foreign’ literary novelists, Wole Soyinka and VS Naipaul among them. They would provide a home for The Room on the Roof, the first novel of the young Indian writer we’ve been following, Ruskin Bond.

Today, British publishing is no longer the force it once was, bleeding as it is from a thousand tiny cuts, but the star of the author of The Room on the Roof continues to be in the ascendant. The publishing firm André Deutsch no longer exists as an independent entity, but Ruskin Bond, the recipient of multiple honours and awards, has over a hundred books in print and can legitimately claim to be India’s best-loved author. And, to the great good fortune of readers, even though he is now in his eighties, he shows no signs of slowing down.

What is it about Ruskin’s work that gives it its extraordinary vitality, clarity, and what can only be called luminosity? From the oldest work to the most recent, his stories shine with a brightness that rises from what the great American novelist, Ernest Hemingway, called ‘true sentences’—creative prose of weight, distinction, honesty and insight that does not strive for effect by being unnecessarily clever, showy or pretentious. Ruskin’s fiction never seems to rust or date, and seems as fresh today as the day on which it was first written. Impervious to the dictates of literary fashion or changing trends, it continues to ensnare generation after generation of readers. I asked him why he thought his writing held up so well, why it didn’t lose its lustre, decade after decade, reading after reading. “I’m flattered that you think that,” he said with a chuckle. “But I never think about any of that. I have always approached my writing with the wide- eyed curiosity of a kid. It’s the same today as it was in the beginning, and if there is any secret ingredient to my writing that would be it. I hope I never lose that.”

(Excerpted from the foreword to Ruskin Bond’s A Gathering of Friends, Aleph Book Company, 256 pages, Rs 395, to be published in April to commemorate his 81st birthday)

David Davidar
David Davidar is a novelist, publisher, editor and anthologist. He has been an attentive reader of Indian fiction for nearly forty years