What is it that makes the poetry of Rupi Kaur insta-sensational? 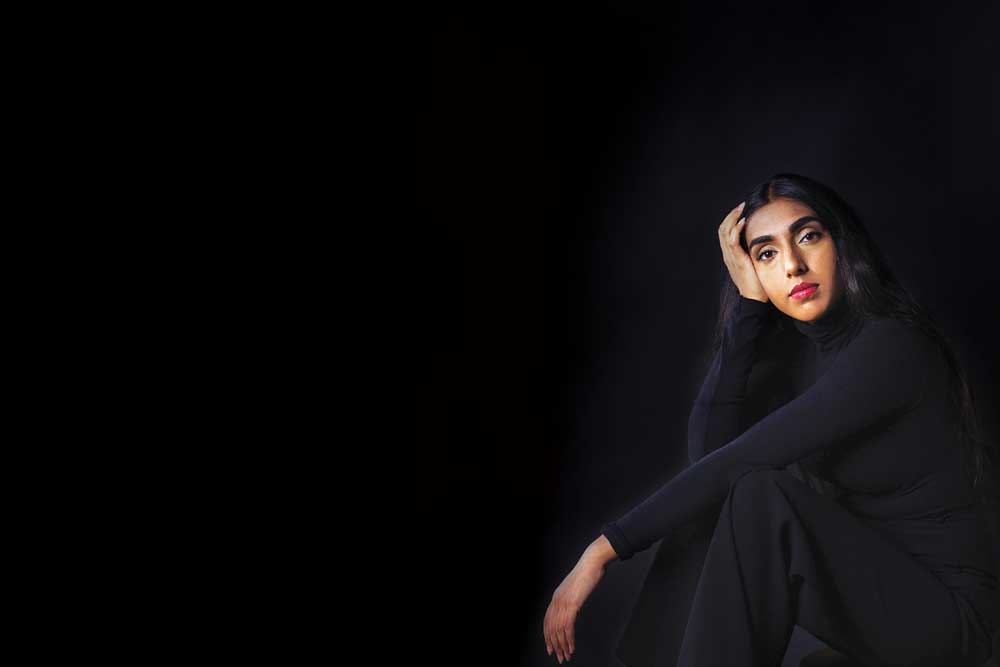 THE POEM, FROM Rupi Kaur’s new book the sun and her flowers (Simon & Schuster ; pages 256; Rs499) is a fitting depiction of her own journey as an immigrant from Punjab. In the mid 90s, the then-three-year-old, along with her family, left her small village in Hoshiarpur to reunite with her father in Montreal. Her father had fled to Canada as a refugee a month after she was born, joining numerous Sikhs who left their home state fearing persecution after the 1984 anti-Sikh riots. Today, Kaur is a New York Times bestselling poet and a spoken-word performer. According to recent reports, milk and honey, her first collection of poetry, has sold enough copies to put her ahead of ‘the next-best-selling work of poetry—Homer’s The Odyssey— by a factor of ten’. She just turned 25.

“This time three years ago, I was designing the cover of milk and honey and getting ready to self-publish it. Now I’m writing poetry full-time, performing, and travelling the world. If my future self had told me this, I would’ve never believed it,” says Kaur, over a phone call from Toronto.

The new collection follows Kaur’s now familiar brand of poetry—deeply personal verses written in a distinct lowercase style (like the Gurmukhi script), and steeped in themes of love, loss, healing, femininity and empowerment. It was this easy-to-read, pared down style in her debut book milk and honey that catapulted her to early fame. For a generation accustomed to consuming bite-sized information on social media, Kaur’s work was instantly relatable—busting the perception of poetry as inherently complex and analytical. She soon joined the ranks of other women of colour who became ‘Instapoets’, like Lang Leav, Nayyirah Waheed and Warsan Shire.

With verses like ‘skin the color of earth my ancestors planted crops on to feed a lineage of women with thighs as thick as tree trunks’, Kaur also spoke to the experiences of the South Asian diaspora. She says that she finds it amusing when her work is singled out as rallying for greater diversity. “When a person of colour, or one from a minority, writes about themselves, it gets boxed in that. I don’t understand that… what else are you going to write about if not your own experiences? And unfortunately, when there is so little representation, you become a voice for the community there is,” she says.

Like children of most immigrant parents eking out a new life in an unfamiliar country, Kaur grew up shy and with few luxuries. She writes about raging with envy and embarrassment on seeing girls carry Barbie dolls and Spice Girl lunch-boxes while she ate her ‘aluminium foiled Punjabi lunch’. While she and her siblings couldn’t have toys or trips, her parents ensured they had books and Roald Dahl, Robert Munsch and Junie B Jones became her best friends. However, there was something missing. “Writers of my own heritage were not accessible to me. It was a struggle to find books about contemporary women poets in Canada; they were never in the libraries. You would have to order them from your cousins in India,” says Kaur.

When a person of colour, or one from a minority, writes about themselves, it gets boxed in that… What else are you going to write about if not your own experiences?

Writing became an easy outlet. “I had a secret blog in high school that I used to publish my art and poetry in. In 2013, I started out on Tumblr and Twitter and began to publish under my name,” she says. Soon, followers started asking her where they could purchase her book, and that’s how the idea of compiling her poems into a book originated. For years, she was told that there’s no market for her poetry, and she eventually decided to self-publish on Amazon’s CreateSpace platform. “It was really the readers that allowed milk and honey to come to life,” she says.

In March 2015, an Instagram post by Kaur broke the internet. As part of a project for her Visual Rhetoric course at University of Waterloo, Ontario, Kaur had created a series of six photos to demystify the period. One of these—a photo of her lying in bed, back to the camera, with a patch on menstrual blood on her pants and bed sheet—was removed by Instagram for violating its community guidelines. Kaur took to Facebook, calling the photo-sharing platform out for its hypocrisy, and said, ‘i will not apologize for not feeding the ego and pride of misogynist society that will have my body in an underwear but not be okay with a small leak.’ As her follower count sky-rocketed and she received support from across the world, Instagram apologised and restored the image.

Kaur’s female readers find her work empowering, but for her, writing about the body and other intrinsically feminine experiences hasn’t come easy. “In high school, I hated being a girl. I was the type of person who thought girls are so annoying and dramatic. I like hanging out with the guys. It was the older women in my community, who I was volunteering with, who taught me so much that I know. They made me sit down and re-frame how I thought about myself. I’m surrounded, and inspired, by so many strong women from my hometown who allowed me to love being a woman,” says Kaur.

In her viral Tedx Talk last year, Kaur performed a moving personal piece on the process of healing after abuse, and how “writing became a guttural response to the trauma.” While revisiting intensely private experiences is challenging, it’s also what pushed her to write. “I used to be afraid to post stuff, whether it was about violence or anything sensual, and thought people are going to judge me. But I realised that the thing I was afraid to write about the most is what I’m supposed to be writing about. That’s become my motto—I feel very grounded, powerful and close to myself when I write so raw and honestly.” While readers perceive her work as autobiographical, not all of it is. “Some of the poems are personal, but others are experiences my sisters or friends have gone through.”

Before settling in Brampton, a Toronto suburb, Kaur’s family moved seven times in five years. While she soon realised that home was wherever she was, her writing started to reflect a deep longing for what she had left behind. In the sun and her flowers, one chapter titled ‘rooting’, focuses on family, migration and mothers. In a poem she recently shared on social media, she writes about wanting to go back in time to sit with the teenage version of her mother in her village, talk to her about her dreams, document her in a home movie. It’s something she thinks about often. “The mother I would’ve known if we had stayed in India would be different than one I know now, who sacrificed so much, living in places where she didn’t have full control of things like language and work. In India she knew her town, her village whereas here, it was completely different. You see a different side to your parents when they return home. That always provokes thought.”

I used to be afraid to post stuff and thought people are going to judge me. But I realised that the thing I was afraid to write about the most is what I’m supposed to be writing about

She wrote a majority of this chapter in California earlier this year, and was affected by what was happening around her. “Initially, the book was going to be just two thick chapters, about the experiences of an unhealthy relationship versus a healthy one. I was trying to write about what it’s like to accept a healthy love after only knowing violence, but it became difficult to do that when tens of thousands of immigrants were being rejected and turned away from America,” she says.

All of Kaur’s poems are accompanied by illustrations, spare line drawings she does herself. For instance, ‘we are all born beautiful the greatest tragedy is being convinced we are not’ is depicted inside a line drawing of a pregnant woman. “My dream was to be an artist, and I assumed I would be one because I’d been painting and drawing since I was five. In high school, I had a serious love for writing and kind of put the art aside. In 2013, I started feeling bad, like I had cheated on my first love for a medium of expression that was louder and sexier almost. I thought I could figure out a way to marry the two. And it’s great because the words and diction are simple, but tied with the illustrations, the meaning becomes a lot deeper.”

While Kaur has an army of social media followers—1.6 million and counting on Instagram—there’s been criticism too. Her lowercase, short lines style has been parodied, and her poems are accused of being shallow and lacking in nuance. But Kaur seems unfazed. “I don’t have any social media on my phone. And I didn’t know of those things until friends started asking me if I’m okay. I think it’s funny because the world that I navigate every single day is a physical one and my experience in that is so different from this internet realm of what’s happening. And I’m just rooted in the physical for now,” she says, adding, “I’m here to create books, movies, novels for the next 50 years, or as long as I’m alive, and the less time I spend on what other people are saying about me, the better.”

Kaur knows her internet followers have much to do with her success. It’s why she always puts out her new work online first. “Art should be accessible, and so much really isn’t. I’m published now and I can keep my poems away from the internet, ask readers to pay for them. But I want to keep my work accessible, and social media is such a fantastic way of doing that. Why should we keep certain people away from it, if they don’t have the financial means?”

She released the sun and her flowers with an elaborate theatrical production in New York in early October, performing alongside other women poets and musicians. “I love doing things big and the production gave readers a visual feel of what the book is like.” Kaur has written 10 chapters of her novel, and continues to write poetry, essays, screenplays. But at the core, she only hopes to continue to empower women across borders. “By the end of the sun and her flowers, I hope they feel more powerful in their bodies, that they see a brighter side of themselves and the world so that they can feel strong and equipped to change the world.”