A psychedelic trip into the abyss 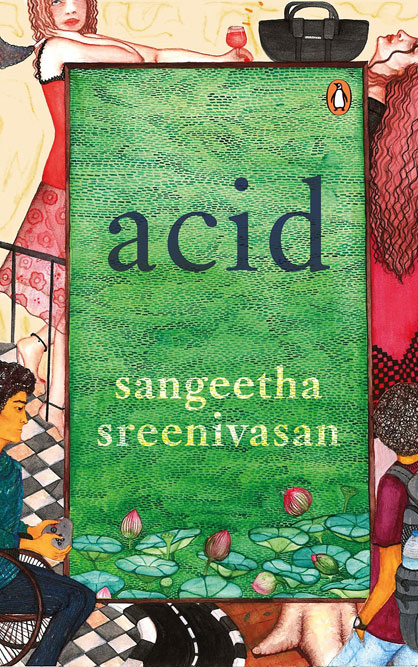 ‘Happy families are all alike,’ Leo Tolstoy wrote, ‘Every unhappy family is unhappy in its own way.’ The family at the centre of Sangeetha Sreenivasan’s novel, Acid (translated from Malayalam by the author), is miserable in its own distinct, dysfunctional way. Kamala and Shaly live together and share a tempestuous long-term relationship. Kamala is a single mother. Having suffered a forced marriage to her cousin and the shock of her son’s paralysis, Kamala finds reality a tough beast to tame. Her frequent acid trips are a bid to break free and to find some measure of solace, but they often go awry, and the sweet oblivion she craves stays out of her reach. Life hasn’t been kind to Shaly either. Shadows cloud her past as well.

Despite their resentment towards Shaly (‘the woman responsible for more than half their problems’), Kamala’s twin sons, Aadi and Shiva, consider her an irreplaceable part of the family. The bond between Aadi and Shiva is also a complicated one. Aadi looks after his brother and Shiva readily accepts his help. Though tethered to one another, they constantly long to break free and live independent lives.

Set in Bangalore, and Kerala, where the family relocates to after Kamala’s mother’s death, the narrative does not fit into a neat, linear timeline. Mirroring Kamala’s trippy hallucinations, the story weaves in and out of time, leaping into the future and looping back into the past as it grapples with the complexities of the characters’ lives. Sreenivasan paints a realistic portrait of Kamala and Shaly—warts and all. The two of them neither conform to societal expectations (cloying ideal woman/ideal mother stereotypes, super women who have it all) nor the gendered binaries female characters in fiction tend to be blithely slotted into (virgin/whore). Both in urban Bangalore and rural Kerala, the members of this unconventional family are subjected to society’s unwanted scrutiny. The devastating impact of societal pressure on individual lives and freedoms is poignantly conveyed as the story unravels.

The overall mood of the novel is one of unrest. No ‘God from a machine’ comes riding in to save the day and untangle messy equations, the clouds hovering overhead hover overhead, no happy ending magically appears on the horizon to placate the growing tribe of readers who crave ‘upbeat literature’ in our time. Rich in imagery and packed with a wide range of literary and musical references, Acid gazes relentlessly into the abyss. Sreenivasan uses startling and vivid images to describe everything from nature’s splendour (‘water drops oscillating on a lotus leaf like precious pearls that had no roots, no reality’) to dreams and hallucinations (populated by ‘red kangaroos wearing lucky horseshoes’) and death, the ultimate reality. Kamala’s drug-induced journeys are set to music by many including Pink Floyd, The Temptations, Funkadelic, and The Chambers Brothers. The classical strains of Kumar Gandharva and blasts of Eminem’s in-your-face rap reverberate in the troubled air. References to the prose of Neruda and Flaubert and Sri Aurobindo’s Savitri are also woven into the novel’s psychedelic tapestry.

Acid dares to go deep into the untamed terrain of womanhood and motherhood, upturns the accepted definition of ‘the family’, and challenges readers to question the airbrushed versions of all of the above a patriarchal culture holds dear. Sreenivasan’s ambition is laudable, but the translation (from Malayalam by the author herself) fails to keep pace with it. Awkward phrases abound in the book. Paragraph-long sentences stagger under the weight of clauses and clichés pop up with alarming regularity. The dialogue the characters mouth often falls flat. The lines, lacking the rhythm of the spoken word, sound stilted and archaic. (A sample: ‘Whom do you think this house belongs to? I am afraid, young lady, you have to answer me’… ‘Beware! You will die of plague, you rotten, disobedient girl!’). The Malayalam original of Acid won the Thoppil Ravi Award in 2017. Clearly, much has been lost in translation.