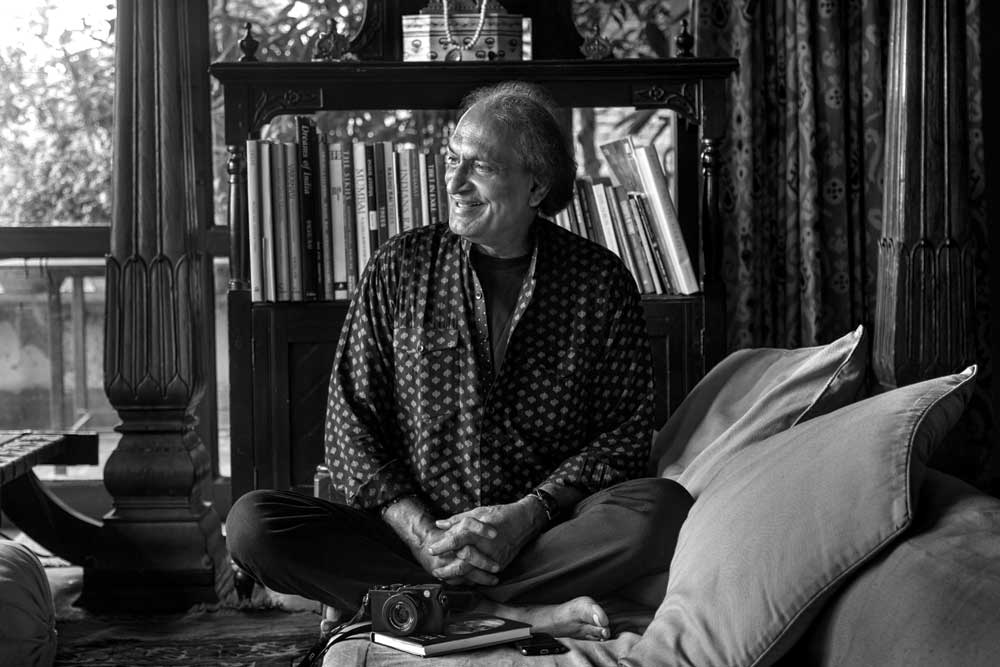 IT IS THE rare image that comes to define a moment in history or a person’s interior life. The Bhopal gas tragedy is frozen in time through the unseeing eyes of a toddler buried in gravel, as a hand rests on his forehead. When we imagine Mother Teresa, the image that flashes to mind is that of her bent frame, wrinkled hands clasped together and her eyes shut tight in prayer. Raghu Rai’s images immortalise the moment and capture the essence of the person. To commemorate his 50th year in photography, Raghu is now out with People, His Finest Portraits (Aleph; Rs 999; 184 pages), which includes images of Satyajit Ray, Bismillah Khan, Dalai Lama and Mother Teresa, amongst others.

But my own association with Raghu started in a more roundabout fashion. In the early 80s, my morning ritual of walking to the bus stop included watching a tall, gangly man sitting in his balcony, camera in hand, photographing the mundane street below. One day out of both curiosity and exasperation, I climbed the stairs to discover that the person in question was S Paul—Raghu’s elder brother, but more importantly, his mentor too. My ensuing love affair with photography revolved around the myriad imagery that the two brothers produced. Though I hadn’t met him in person, the magic of his wide-angle lens left an indelible imprint on the pages of India Today.

His ode to the Indian classical musician remains my favourite photographic series till date. Given Raghu’s obsessive love for music, he was a familiar sight at most classical concerts, camera in tow, eyes closed, and swaying rhythmically. His languorous frame would invariably block the view of lesser lens-armed mortals like myself.

I might have gone on to sell my soul to advertising, post college. But even in those years of fashion imagery, my photographic inspiration continued to come from his books and his gritty photojournalism. Ironically, in a U-turn during my own journey, I landed up at India Today as its creative director, and in a way followed Raghu’s large footsteps, albeit gingerly and briefly.

With People, I am reminded once again of the reason his work stands out. The men and women in these pages are familiar—because they are famous. But Raghu makes them familiar by giving us intimate moments, such as a young Sonia Gandhi caught in a private moment of reflection on a public stage; a ravishing Moon Moon Sen putting on the final touches of makeup in a handheld mirror; or Satyajit Ray smoking a pipe and resting a bed on the sets of Ghare Baire. Raghu feels that it is possible to capture such intimacy by treating photojournalism as a gentle art and respecting the space of his subjects. He says, “There are times when treading in with a camera is like invading a personal space. But I am reminded of my artist friend Himmat Shah, who said that you don’t even have the right to cut a small rock from the Himalayas, unless what you cut and sculpt out of it has the experience of the Himalayas. But if in a difficult situation, a photograph manages to capture the essence, the magnitude, the depth of that experience, which is honest and intuitive and on a par with what nature holds as a mirror to you, then the camera has served its purpose.”

What doesn’t come from your heart and milieu seems misplaced, unless it has your personal touch

His favourite subject remains the Dalai Lama. He says that for His Holiness’ photograph in this book, he tried to create a studio for him, with two lamas holding the backdrop. Raghu recalls how at the given time, the Dalai Lama came to him and whispered, “Where do you want me to stand?” The humility of the spiritual leader, his spiritual energy and intensity shine through the portrait.

Many of Raghu’s most iconic photos have been shot with a lens range of 24 mm to 60 mm. He confesses being partial to it as it better captures the atmosphere and surroundings. But it would appear that he is slowly turning his attention away from people to a different realm. He says, “Now I am working with clouds. Here I feel particularly inadequate because there is no lens that can capture an entire sky. I bought a round-shot camera which goes 450≤, but uses film, which I incidentally hate using now.” (The ability to see the image instantly is half the magic, he feels.) For Raghu, only a wide lens can do justice to the multitudes of India. “India is a country where so many simultaneous moments exist in a physical space, and it is my endless desire to assimilate them all,” he says, “Even the use of the panoramic camera is my attempt to capture those throbbing moments.”

If Raghu uses a wide-angle lens to capture the Indian ethos, his influences are Indian too. He is especially appreciative of Raghubir Singh, who died in 1999 and is still celebrated for his documentary- style work. Raghu feels that a problem with Indian photographers is that Western influences still have a hold on them since photography was essentially born and raised in the West. He says, “You cannot pick up one style and inflict that on another culture. It is not justified. What doesn’t come from your heart and milieu seems misplaced, unless it has your personal touch.” While believing that there is no ‘Indian way of seeing’, he says it would be wonderful if youngsters today didn’t copy a Western style idiom blindly in a bid to be different. He adds, “It is bugging when you need to add a subtext to an image to make sense of it. Your image is good if it can speak for itself just now and no more.”

When it comes to today’s scene, Raghu is critical rather than optimistic. He says, “[Festivals] are chaotic and mostly showcase below-par imagery and are extremely derivative in nature. It is a fast food-attitude to showcasing photography without serious thought… When you look at these images at a second glance, they don’t hold anything. There is an increasing banality. We do not have committed curators to write lucidly about photography. Those running schools of photography are failed photographers who don’t get work.”