In a new memoir, Priyanka Chopra Jonas opens up about favouritism in Bollywood, heartbreak, depression, but equally about the joy of making movies across continents and finding her prince charming in the unlikeliest of places 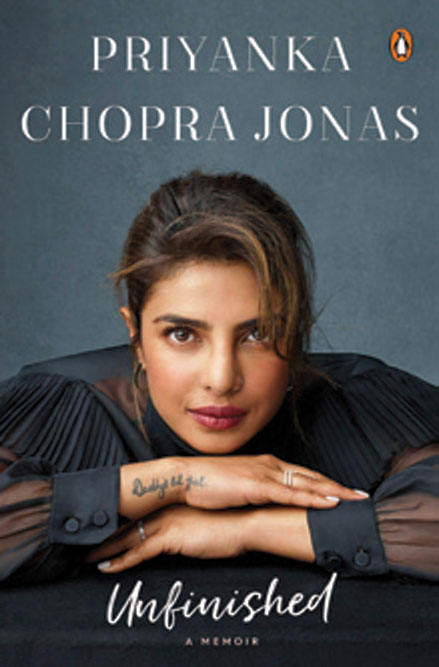 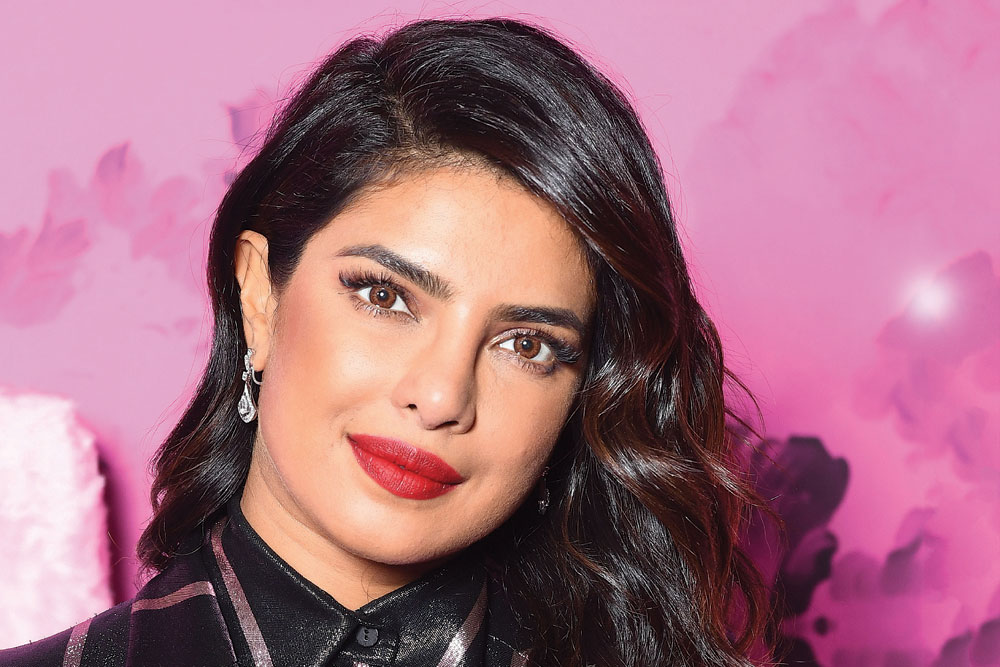 
ONE OF THE most powerful Indians in entertainment has ripped into Bollywood, exposing it as a big boys’ club, run mostly by family-owned studios; talking about its inherent racism where she was constantly described as “kaali” (black); and speaking for the first time about the films she was let go from because a co-actor, director or producer wanted to gift the role to someone else. In her candid memoir Unfinished (Viking; 240 pages; Rs 699), Priyanka Chopra Jonas talks about how relatively early in her career the lead actor of a movie she was about to start shooting came to visit her on the set of a film she was then working on. “Listen, Priyanka,” he said casually, “you may not be able to do this movie because I’ve promised the role to someone else.” The someone else, she soon found out, was his girlfriend. She talks about this happening again a few years later and how she was able to handle this bullying because of her experience as a 15-year-old in an American school where she had faced racial slurs.

In simple, elegant and empathetic prose, Chopra Jonas writes about how it took her over two years to recover from the depression brought on by her father’s death from cancer. She talks about her habit of giving too much of herself to relationships with men who didn’t deserve that love. And she reveals the sexism she had to face in her early years including a director insisting that her panties be seen in a song, otherwise “why would people come to watch the movie?” She talks about yet another producer/director (who not long ago was named in a sexual harassment allegation in India), known as much for his extravagant movies as for his notorious philandering, telling her to get a boob job, fix her jaw and add a little cushioning to her butt. He even suggested a doctor in Los Angeles.

Chopra Jonas has always believed in speaking her mind, even as she has kept her head down and done the hard work that has got her a career in Bollywood and now Hollywood as well, where she has been pounding the pavements, taking meetings and doing auditions, to finally reach a position where she is now seen as a dramatic actress. With a much appreciated part in Ramin Bahrani’s The White Tiger in 2021, she is now doing exactly what she promised in the book—building a larger table rather than constructing a higher fence.

Having made her mark with American network ABC’s Quantico, where she dug her heels in to get a part that was not a stereotype of Indians onscreen, she is making work happen. She has a first-look deal with Amazon. She is balancing work in streaming series—she is doing the Russo Brothers’ Citadel with Bodyguard’s Richard Madden—with a part in a big, noisy possible blockbuster (Matrix) and another in a smaller romantic movie, Text for You, opposite Outlander’s breakout star Sam Heughan.


I was running so fast I didn’t have memories. But I had peace and quiet when I was home for six months to introspect, the book just flowed out of me, says Priyanka Chopra Jonas

It’s time for “colour-conscious” casting she says—choosing that term over colour-blind casting. It is important to create opportunities for ethnicities that haven’t had these chances before. The demand for diversity has been loud, she says, and it is required because we have the ability to stream across 160 countries. She adds,“So you can make a movie with an Iranian director, an all-Indian cast shot in India and written by an Indian but it has taken the pushing of a few very powerful South Asians within America who have demanded change whether it is Mindy Kaling, Aziz Ansari, Hasan Minhaj, Riz Ahmed or even me. There’s a demand to shake it up, be outside the box and of course we’re consuming entertainment from all over the world. I was watching an Iranian show the other day, my mom watches Korean dramas.”

She has always been driven. It was 2004. I remember getting a call from a young Priyanka asking me quite determinedly what photograph I was going to use for the cover of a special issue on Bollywood. She had just starred in Aitraaz, which was a remarkably uninhibited performance devoid of the usual coyness associated with Hindi film actresses. “I don’t want the image to be cheap,” she said. “It can be sensual but not vulgar.”

CHOPRA JONAS HAS ALWAYS been sure of what she wants and while she puts a lot of her life on social media, she is the first to admit that it is at a superficial level. For the first time ever, she has let her guard down and scratched beneath the surface to tell her own story—of rejections and failures, personal and professional—in her own words.

Like everything she does, she has done it to the best of her ability. She says she is terrified about the world reading it but also as a woman now on the other side of 35, she’s reached a place in her life where she is self-assured. It’s taken 20 years of being in the business to find this space of contentment.

Her journey started with the new millennium, winning the Miss World title as a 17-year-old. In Mumbai films, she had to make the slow and painful transition from glamour doll to dramatic actress. She managed that with movies such as Fashion (2008), which won her a National Award for Best Actress, and Barfi! (2012), Dil Dhadakne Do (2015) and Bajirao Mastani (2015).

She says there’s always been a lot of scepticism about her next step but “when you try something new there’s always bound to be resistance”. She’s pivoted her consciousness to notice only the positive chatter about her. The last six months have possibly been the slowest Chopra Jonas has ever travelled. She says,“I was running so fast I didn’t have any memories. I didn’t have anything when I sat down to write this book so I wrote a floor plan, milestones that I remembered, my school and my boarding school. I had peace and quiet. I was home for six months to introspect. It just sort of flowed out of me.”
It took her a couple of years to garner the courage but now when she re-reads the manuscript, she is proud of her achievements and experiences. “I kind of wear my scars like my medals, they’ve made me who I am. I am a small town girl from very unassuming beginnings. If I can be sitting here, self-made, then anyone can.”

Indeed, her story is not merely about herself. It is about her extraordinary parents who always treated her with dignity and respect—starting with putting up her nameplate as a child below theirs: ‘Major Ashok Chopra MBBS MD’, ‘Captain Madhu Chopra MBBS DORL’, ‘Miss Priyanka Mimi Chopra Upper KG’. Her parents gave up their careers in Bareilly, even giving up the hospital they had founded together, to help her establish her career in Mumbai. It is the story of every middle-class family in India which invests everything it has in its children, time and energy, money and dreams.

She is open about the corrective surgeries she had to undertake when the bridge of her nose collapsed and she was summarily dropped from two big movies. She talks about the tough love she got from one of her first choreographers thanks to which she signed up for Kathak lessons. She writes frankly about the slump she faced in the industry after five years, forcing her to take a risk and sign up for Fashion. And she writes charmingly about how her relationship with Nick Jonas evolved, despite her initial scepticism about the 10-year gap.

But she is at her most vulnerable when she speaks of the depression she fell into while shooting Quantico. “I was still grieving my father and still nursing a broken heart from a previous relationship. I was mostly alone. I would eat by myself, watch TV by myself and stay up well into the early morning hours even though that meant I got little sleep. I put on almost 20 pounds. On social media, people made unkind comments about my weight, in texts, friends took me to task for backing out of the few plans for drinks or dinner that I had forced myself to make.” Not exactly the life we expect our glam gals to live.

I kind of wear my scars like my medals, they’ve made me who I am. I am a small town girl from very unassuming beginnings. If I can be sitting here, self-made, then anyone can, says Priyanka Chopra Jonas

She is equally honest about her breakups, though voyeurs will be disappointed that she doesn’t name names. She writes about her relationships through most of her twenties and early thirties: ‘I’d get involved with a wonderful man and we’d have a lovely time, usually for a period of years. By the end of the relationship, though, I’d have lost myself somehow. I’d be exhausted, discouraged and disappointed and I didn’t know how I’d gotten to such an unhappy place.’

And she has all our hearts when she writes about how after a dating hiatus she wrote a little note about her ideal man and put it in her wallet, and that when Nick Jonas turned up in her life, he was just what she’d been waiting for, without knowing. What’s more, she and Jonas now even have their own mansion in Los Angeles, planted on a hillside with a view of the city below. It’s a house where she hopes to grow herself and her family.

Chopra Jonas tells me one of the reasons she wrote this book is for those who don’t know her well and for whom she is mere dinner-table conversation or an Instagram post. “I hope they get familiar with me as a girl, a human being and as a person,” she says.

They will. What’s more, they will like her for her courage and her candour.