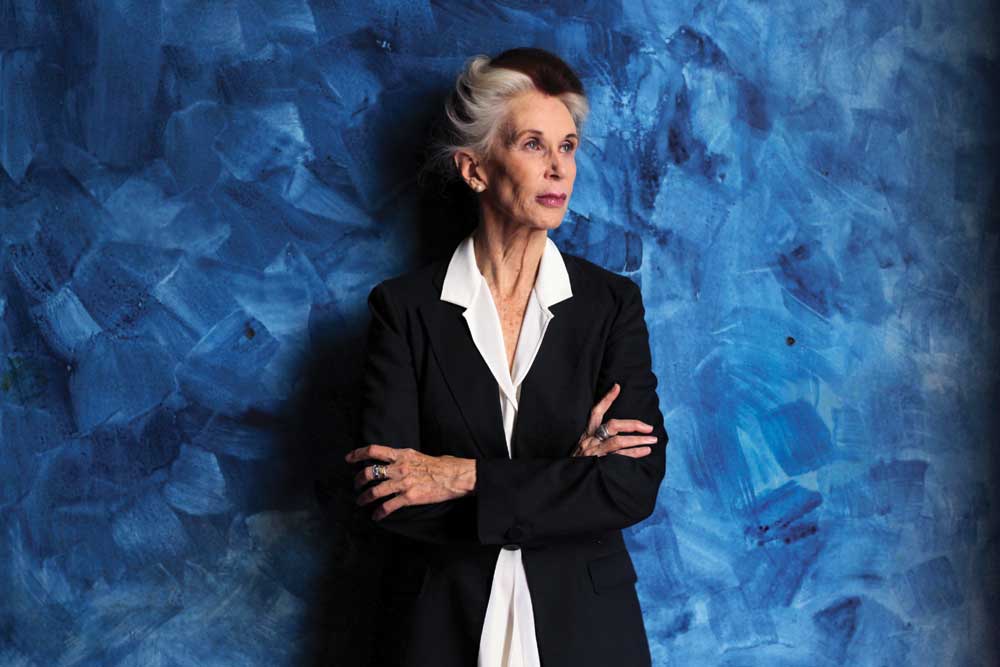 CATHARINE MACKINNON BELIEVES that Hugh Hefner’s death proves that there’s justice in the world. “Playboy revolutionised sexual abuse by normalising it in a major way. It made it ordinary. Sometimes justice takes interesting forms—we are alive and he’s not,” she says. It’s a perspective many would consider extremist, offensive even, but it’s one that rightly echoes MacKinnon’s radical feminism. In the 70s, the American writer-lawyer-activist pioneered the legal claim against sexual harassment, and in her first book—Sexual Harassment of Working Women (1979)—argued that sexual harassment was sex discrimination. Later, alongside feminist activist Andrea Dworkin, she also took up arms against pornography for dehumanising women.

MacKinnon, the author of half a dozen seminal feminist books, who teaches law at Harvard Law School and the University of Michigan, was recently in Mumbai for a panel discussion on the legalities of sexual harassment at Tata Literature Live. In an exclusive interview, she talks about how the moment of change is now.

Sexual Harassment of Working Women had a major impact on the development of the sexual harassment law. There’s been progress in the professional sector globally since, with organisations instituting anti-harassment cells and sexual guidelines. How do you view the developments?

I created the legal claim for sexual harassment around 1972-73, and worked on it in the next few years, when I was also writing the book. The book went on to have an impact. There have been a lot of developments and not just in the professional sector, but also in schools in the United States and some other countries.

In fact, my new book Butterfly Politics (2017) is about complex causality in the relation between legal and social change. I view the development as complicated. It goes in a lot of directions at once and it’s happening on a great many levels. Change is being resisted because the basic rule is that the more power men have, the more they can have access to women sexually without consequences, just because they want to. People say change is slow, but that isn’t true. It’s resisted until something happens that breaks that. And then change happens extremely quickly. There have been a few times when real change has gone forward and right now is one of them in the US.

Since the Harvey Weinstein scandal, women across the world are speaking out against sexual assault. Is this a watershed moment in feminism? Are things going to change in work spaces?

I wouldn’t call it a scandal if I were you. That’s sort of a British word that combines when people are having sex that’s not a good idea with sex that’s being forced on people. And they really are two different things. But it is a watershed moment and things are changing. How much, for how long and what gets institutionalised from it is the only question. Right now, White male money is fleeing White people in ways we’ve never seen. It’s a remarkable thing to see sexual harassment go from being a privilege of power to a total disgrace. And in the middle of that process, it became a legal claim, a human right. What’s also interesting is the women aren’t suing anyone. They don’t have anything to gain from this. And everything to lose. And we’re suddenly seeing consequences for men you couldn’t bring a lawsuit against. You can’t bring a lawsuit to get the guy fired, his book deal undone, his magazine deep-sixed, his movie or series taken off the air.

Change is being resisted because the basic rule is that the more power men have, the more they can have access to women sexually without consequences, just because they want to

Also the women who came forward with a lot of courage are mainly celebrities calling out powerful men in the entertainment industry. It’s a combination of celebrity culture with the media’s interest in what powerful men do. If your harasser isn’t a guy who’s prominent enough, it’s unclear if the media would be that interested, no matter how many women he’s done that to.

In an age of media excesses, how do you view the #MeToo campaign as an agent of change?

It’s already an agent of change. Social media gives women a voice where they didn’t have it before. The campaign is giving a platform to women to join together with other women, which is a collective motion. It’s called a women’s movement, when you have 500,000 women on it in two hours. The other thing is there’s been good data on this for a long time. But for some reason, people didn’t believe it somehow. They don’t have any reason for not believing, they just sort of choose not to. Now, women are coming forward in real numbers … with real accounts. That helps support the information that people who work in this area have had for a long time.

There’s nothing for the women to gain here except to be believed and to stop this being done to other women. That’s real progress. Although it’ll be even more progress when there are more women in more positions of power like those men. So that there are possibilities for women in all those industries to do their art, not leave their professions, and be able to work with women who presumably aren’t going to force sex on them, because women don’t tend to do that.

Recently, an Indian law student in the US, Raya Sarkar created a Google spreadsheet where she and other women have accused over 70 Indian professors of sexual harassment. This has stirred an ideological debate on the ethics of The List versus the difficulties women face in actually reporting harassment. What do you think of this?

If she did this, it’s courageous because she’s opening herself to defamation and lawsuits. It’s a product of desperation and hope. There has to be legislation against this and there have to be processes on campuses where people can complain. Because there aren’t, something like this happens. What about the ethics of that? The people who are upset about the ethics of people complaining (to the only place they can complain to) are to consider that there should be a better place for complaint, where there could be some actual due process, actual hearings, inquiries, investigations and consequences. There also needs to be a forum. The absence of one means there’s no avenue for relief for people who’ve been abused and also no avenue for being cleared for people who’ve been wrongly accused. Where are they going to go to get their reputation back now that there’s no place to go for any real complaint or any real response to a real complaint? It never occurred to a lot of these men that the women they harassed might someday have more power than they do.

If your harasser isn’t a guy who’s prominent enough, it’s unclear if the media would be that interested no matter how many women he’s done that to

You’ve held that prostitution is not a free choice and is the oldest form of oppression. In India, it’s also closely linked with poverty and caste. What kind of system do you advocate to curb trafficking?

Poverty and caste mean you don’t have a choice. The one thing that works is to criminalise the buyers, the ones with the real power. If there were no buyers, there would be no sellers, namely traffickers. In Sweden, I proposed they criminalise the buyers and decriminalise women. They have virtually eliminated sex trafficking and dramatically reduced prostitution. It’s essentially the only approach that’s worked against prostitution so far as I know in the history of the world. The upper class, the relatively more wealthy buyers drive the situation and they keep getting off the hook. They’re the ones everyone ignores. It’s a real rule-of- law challenge because the easy people to get are the women, and you have to eliminate all penalties for them. Norway, Iceland, Northern Ireland and Canada have done that. France has the best material support in terms of housing and education for women who want to leave the sex industry, so that they can have the life they want, with real backup from the government.

Your stance on pornography, as a violation of women’s civil rights, has attracted widespread criticism, including from sex- positive feminists. The Internet Age has only boosted the industry. Do you think all pornography is wrong?

What happened to those sex-positive feminists? Why aren’t they out here defending Harvey Weinstein? There he was being sex positive, swinging his penis around at women in his open bathrobe. All those women who’ve been defending young men accused of sexual assault on campuses, saying they aren’t getting a fair shake, where are they?

Pornography is a major reason for sexual assaults. The logic, as made clear by research, is it has to become more and more aggressive, intrusive and violent on women because it de-sensitises the user to abuse. Look at the way men in the entertainment industry treat the women in that industry. They relate to them the way they relate to the women in pornography. They’re masturbating all over them. It’s this spectator sexuality that they’re practising, which is straight from pornography. I think a lot of women, at least in the US, appear to be at the end of their tolerance for that. They’re not willing to be treated like things, where their capacity to be sexually used is the measure of their value, where their worth in their profession is measured according to some superior’s notion of their sexual accessibility.

What is the future of feminism? What feminist battles need to be fought in the developed and developing world?

The way I think about it is, what is it going to take to produce equality for women? That’s really my question. There are different routes and complex interactions with everything else that’s going on in the country at the time with the prevailing politics, even though the politics of women and men is a politics of itself. There is no single answer to it. It’s a global movement and a global problem, but the solutions are local. Rape and marital rape have been a universal problem and even in places where it’s actually illegal, it still goes on and isn’t reported. Even when it is reported—I’ve studied these cases—it turns out you need to have unbelievably more violence in it to get a conviction in a marriage. Because the attitudes are often, ‘Oh well, there she was with him for like all these years.’ The issues are recognisably similar across cultures, and it’s going to take the women in those places to effectively go after the way they get culturally embedded. Because they’re the ones who know. They know the realities, the interconnections and the political challenges that are specific to their own situation. As for the men, I’ve heard some of them say, ‘Those are the bad men but I’m not one of them. I’m the good guy.’ You don’t begin by distancing or exempting yourself from it. At the same time, you don’t have to go out there and say, ‘Here are the thousand things I’ve done.’ You can figure out a way to support women, to make space for them to say things, back them up and stand behind them for a change. Give them real power.