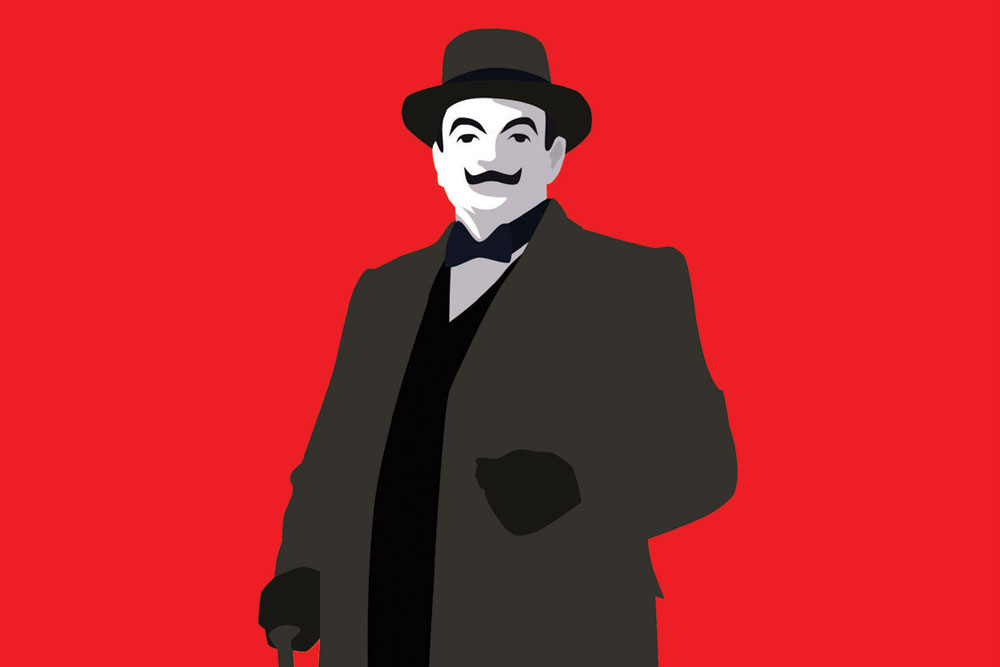 
IN 1916, THE 26-year-old Agatha Christie finished writing her first detective novel at Dartmoor, a quiet upland in Devon, UK, known for its beautiful granite hilltops. Sir Arthur Conan Doyle had published The Hound of the Baskervilles, in 1902, which would become one of the most widely read Sherlock Holmes adventures—and the story was set in this same corner of the world, Dartmoor.

And with The Mysterious Affair at Styles (published a 100 years ago, in 1920) Christie would introduce readers to Monsieur Hercule Poirot, an old Belgian detective who resembled Holmes superficially (‘eccentric detective, stooge assistant’, as the author would admit in her autobiography later) but whose psychological insights and near-mystical idiosyncrasies would make him arguably the most successful and beloved literary sleuth of all time. Books like Murder on the Orient Express (1934), The Murder of Roger Ackroyd (1926)  and Death on the Nile (1937) remain some of the bestselling murder mysteries in the world today, over eight decades after their original publication (Christie’s net sales for all of her books combined are over two billion now).

The Mysterious Affair at Styles both followed and set new parameters for the template of the old-fashioned British ‘inheritance mystery’: the victim (Emily Inglethorp) was an heiress, the setting was an Essex country manor (the titular Styles House) and the lineup of suspects included assorted stepchildren plus a possible ‘gold-digger’ (in this case, a much younger man married to Emily). Captain Arthur Hastings (Christie’s ‘stooge assistant’ who like Conan Doyle’s John Watson was former British military), who is staying near the Styles House, soon recruits the help of his old friend Hercule Poirot. Here’s how Hastings introduces us to the legendary detective, the passage where that famously egg-shaped head makes its first appearance:

‘He was hardly more than five feet four inches but carried himself with great dignity. His head was exactly the shape of an egg, and he always perched it a little on one side. His moustache was very stiff and military. Even if everything on his face was covered, the tips of moustache and the pink-tipped nose would be visible. The neatness of his attire was almost incredible; I believe a speck of dust would have caused him more pain than a bullet wound. Yet this quaint dandified little man who, I was sorry to see, now limped badly, had been in his time one of the most celebrated members of the Belgian police.’

In subsequent books, we are gradually introduced to the full array of quintessential Poirot elements: the pocket-watch that’s always on his body, the pince-nez he uses to read and his strategic usage of broken or ‘foreigner’s’ English (he could speak English perfectly; he just chose not to). The purpose was to throw people off or make him appear vulnerable, a confused old man from foreign climes and so on. This little touch and Poirot’s Belgian nationality in general were derived from a piece of wartime propaganda—as the historian Kimberly Jensen writes in Mobilizing Minerva: American Women in the First World War (2008), the British government’s wartime pamphlets and posters used the figure of the hapless Belgian terrorised by German soldiers to gather support against the German/Austro-Hungarian alliance.

The Poirot-Hastings pairing may appear similar to Holmes-Watson, but the similarities ended there—going well beyond Holmes’ dictum of ‘cold, scientific reason’, Poirot believed in approaching murders from the point of view of the killer, his desires, motivations and possible modus operandi. A murder mystery on the inside if you will; for Poirot the frailties of the human mind (and consequently, the heart) represented the ultimate ‘locked room’ puzzle. In that sense, he can be considered a kind of amalgam of Holmes and Father Brown, GK Chesterton’s literary riposte to the Baker Street genius. The 1910s (the years leading up to The Mysterious Affair at Styles) were a fertile period for Chesterton: dozens of popular Father Brown stories were written in this decade.

The Italian theorist Antonio Gramsci, in his Prison Notebooks, compares the techniques of Holmes and Brown, expressing his clear preference for the latter: ‘Sherlock Holmes is the ‘Protestant’ detective who finds the end of the criminal skein by starting from the outside, relying on science, on experimental method, on induction. Father Brown is the Catholic priest who through the refined psychological experiences offered by confession and by the persistent activity of the fathers’ moral casuistry, though not neglecting science and experimentation, but relying especially on deduction and introspection, totally defeats Sherlock Holmes, makes him look like a pretentious little boy, shows up his narrowness and pettiness.’

For Poirot, of course, the ‘refined psychological experiences’ Gramsci so treasures happen not through confession but via the rigorous deployment of his own ‘little grey cells’— he prided himself on getting into the mind of the killer. Again and again, Poirot found one detail, one slip of tongue, one unthinking utterance on the killer’s part that leads to their eventual unmasking. Which isn’t to say that he was entirely dismissive of modern science, of course—drawing off her vast knowledge of toxicology (which in turn drew from her experience as a wartime nurse in Devon), Christie made Poirot an expert in various kinds of poison; for The Mysterious Affair at Styles it was strychnine. Kathryn Harkup’s massively entertaining book A is For Arsenic (2015) details this part of Christie’s and Poirot’s lives.


The Mysterious Affair at Styles (1920) both followed and set new parameters for the template of the old-fashioned British ‘inheritance mystery’. It also introduced us to the legendary detective Hercule Poirot

How do we assess the legacy of Hercule Poirot in the 21st century, at a time when crime scene investigation techniques (which Poirot laughed off as the arsenal of the ‘bloodhound’, an inferior class of detective according to him) are sophisticated beyond recognition and law enforcement agencies around the world are increasingly dependent on technology? A simple and effective way is to take a good, long look at the popular onscreen detectives since the 1970s, when Christie wrote her Poirot books.

So many of the most memorable sleuths followed Poirot’s obsessive-compulsive ways (Kenneth Branagh, who directed the latest Poirot film in 2017, reckoned that Poirot was ‘definitely OCD’) — Columbo, Monk, Psych, The Wire and True Detective all feature obsessive-compulsive detectives. Of these, Adrian Monk from the ABC show Monk feels like the closest analogue. Monk suffers from a variety of phobias and compulsions, his physical gestures are a source of comedy, his sense of dressing is antiquated and he frequently tricks criminals by appearing vulnerable. Most importantly, while he’s not scornful of the forensic sciences, he often solves crimes by uncovering what drove the killer, by understanding his psyche. The one big difference between the two is that while Poirot was flamboyant to a fault, a show-off, really, Monk is fairly low on confidence at the best of times, a man still traumatised by the unsolved murder of his wife many years ago.

Like novelist Sebastian Faulks was hired by the Ian Fleming estate to write all-new James Bond adventures, in 2013 the Agatha Christie estate hired poet and novelist Sophie Hannah to write a series of Poirot books. So far, there have been three : The Monogram Murders (2014), Closed Casket (2016) and The Mystery of the Three Quarters (2018). All three have been set in the period between 1928 and 1932, thus chronologically placing them in between Christie’s The Mystery of the Blue Train (1928) and Peril at End House (1932). Hannah’s work has been generally well-received by critics, in particular her brilliant channelising of detective tropes from the 1920s and ’30s, the so-called Golden Age of the genre.

What would Poirot have made of the internet era, of the ongoing pandemic, of US President Donald Trump’s all-caps Twitter account? I like to believe that he would have struck a contrarian note and surprised us with optimism (surprising because detectives are professional cynics). He would have made one of his classic quips, with a twinkle in his feline eyes. Something like ‘What a newspaper prints is news—but not always truth!’ Or, to sum up the madness of the 21st century in typical Poirot fashion: ‘There is nothing more amazing than the extraordinary sanity of the insane! Unless it is the extraordinary eccentricity of the sane!”