On the Cusp of History 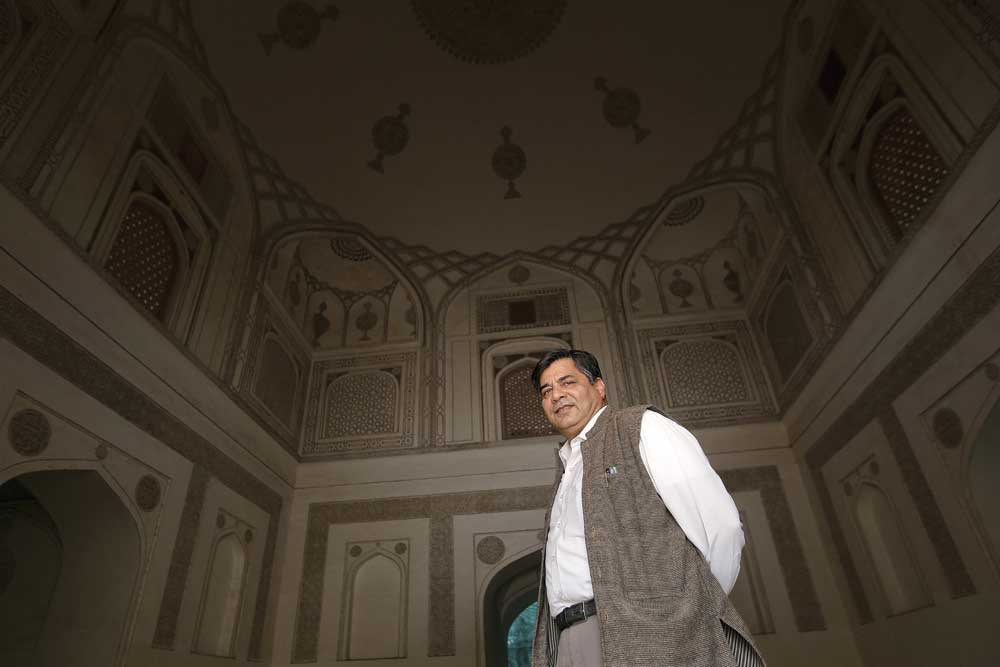 THREE YOUNG STUDENTS loiter at the gate, debating who should foot the Rs 15 entry fee. The matronly ticket seller (with a distinct south Indian accent) tells us, “Only garden entry. No climbing.” Sleeping dogs startle awake at the tread of strangers. A Bollywood song rises in the background. Labourers look up from mouthfuls of lunch to follow our footsteps. As we make our way over construction material, cement and brick, a tomb rises into view. We are in the precincts of Abdur Rahim Khan-i-Khanan’s tomb in Nizamuddin East on Mathura Road near Humayun’s Tomb in Delhi. After centuries of neglect—it is believed that in 1753-54, marble and sandstone from this tomb was used in the construction of Safdarjung’s Tomb located a few kilometres away—Abdur Rahim’s tomb is getting the attention it deserves, thanks in part to the restoration efforts of the Aga Khan Trust for Culture. While the labourers in the compound will restore the tomb to its former glory over the next few years, our guide that morning is a historian who has spent the last two decades in the company of Abdur Rahim and his father Bairam Khan. TCA Raghavan is a former High Commissioner of India to Singapore and Pakistan, and is the author of Attendant Lords: Bairam Khan and Abdur Rahim, courtiers and poets in Mughal India (HarperCollins; 338 pages; Rs 699). A historian by training and a Foreign Service officer by vocation, he uses the stories of this father-son duo to trace over a 100 years of Mughal history, spanning the reigns of Babur, Humayun, Akbar and Jahangir. For Raghavan, this tomb (which even has a fountain on the first floor, an engineering marvel of that time) can be seen in architectural continuity with Humayun’s tomb and the Taj Mahal. This book has been his project of passion for the last two decades, and it has taken him from Ahmednagar to Burhanpur, Lahore to Ashgabat. He completed the manuscript a decade ago, but sent it to the publishers only once he had retired. Following his own heart and curiosity, he stumbled through various serendipities and discoveries as he came to intimately know these two Mughals who were both military men and men of letters.

Bairam Khan Khan-i-Khanan (1497- 1561) was a Persian Turkmen, hailing from a family that was influential in Persia and Central Asia in the 15th century. He became regent to a 13-year-old Akbar after Humayun slipped to his death on stairs. Bairam’s son Abdur Rahim Khan-i-Khanan (1556-1626) was one of the great generals of the Mughal Empire during the reigns of Akbar and Jahangir. Raghavan writes, ‘Abdur Rahim’s political and military achievements surpass his father’s, but he is best remembered for his literary prowess. He was one of the great patrons of Persian literature of his time; in the history of Hindi literature, he has an even greater reputation as an outstanding poet in a century of literary achievement.’

The cover jacket of the book shows a young Akbar learning to shoot as Bairam Khan stands behind and provides instructions. An attendant with a fly swatter is positioned behind Bairam Khan. This painting by Govardhan wonderfully illustrates the early dynamics between the young king and his ataliq (guardian and tutor) Bairam Khan. He took the young emperor under his wing, and at a time when the Mughal restoration threatened to splinter, he took bold and decisive steps. He helped consolidate the Mughal Empire, especially against the forces of an Afghan army led by Hemu. But as the ways of fortune and fate are forever fickle, Bairam did not remain in Akbar’s good books for too long. Over time, the young emperor (18 years old now) took a dislike to Bairam’s high-handed ways and became dismissive of him. Rumour and lore are quick to blame Akbar for Bairam’s bloody murder. But Raghavan writes that there is ‘no evidence at all’ that the court had anything to do with Bairam’s dramatic death. Bairam’s tumultuous life and fall from grace is an excellent example of how there are more things on this earth than are dreamt in philosophy or fiction.

Speaking about why he chose to write the histories of these two men, Raghavan says, “The story is well known. What I’ve tried to do is fill in the details, bring the literary part and the rest of their lives together. They are important to us. Abdur Rahim is important to us only because of his literary reputation. But unless you put the literary with the military and political parts together, you don’t get a picture of the whole man. [This book] doesn’t correct as much as completes their personalities.”

Abdur Rahim is important to us only because of his literary reputation. But unless you put the literary with the military and political parts, you don’t get a picture of the whole man

The importance of Attendant Lords is that it places these two historical figures in the larger context of nationalism and nation building. The dohas of Abdur Rahim often appear in high school textbooks, but this book reminds us that the Devnagari movement made him into an icon of Indian nationhood. His devotional poetry was politicised at the time, with supporters of the Hindi movement using it to further their cause, while some Muslim scholars contested that, arguing he was such a good Muslim that he could not have written this kind of devotional poetry. Raghavan explains, “In a way you have two views about Abdur Rahim. And in a sense you have a larger debate about Mughal history, which is there today, but has been there for a long time. ‘How syncretic was it?’, ‘How pluralistic a system was it?’ Or is it that by posing questions on syncreticism and pluralism, we are misreading that history altogether?’ I think this is really a debate on how we read our medieval history.”

If Abdur Rahim was claimed by both the Hindi and Urdu factions, his father is a hero all the way in Turkmenistan. Raghavan dwells in detail on how these newer countries (like Uzbekistan where Babur is a national hero, and Turkmenistan) “establish an older genealogy” by claiming these historical figures as their own.

All of history-writing requires a certain amount of imagination on the part of the author. How does he draw the line between the writing of history and historical fiction, I ask. “In fiction, you have more latitude,” he says, “In history, you are bound by the discipline, but there is still scope for interpretation and re-interpretation… Biography writing is still weak in India.”

‘Why isn’t there more biography- writing in India?’ is a question that he has often asked himself. He believes that till the 50s, India did have a great tradition of biography-writing. But from the 60s and 70s, the emphasis shifted towards studying broader social and economic trends. He says, “In the process, the role of the individual in history somewhat receded into the background. I think it is a big weakness because when you don’t look at personalities, it is no longer easy to animate history. And therefore history becomes confined to professional historians, rather than to the serious reading public.” Thanks to this, in India we now have a situation where there is good professional history being written, but the readership is limited to other historians. This risks making historical work jargon ridden and turgid.

In a bid to animate contemporary history, Raghavan is also writing a book on India-Pakistan relations to mark the two countries’ 70th year of Independence. He has dug deep into the memoirs of those on both sides to create a picture of how the relationship between the two countries has developed. His second book will be out in August.