Motherhood memoirs are in fashion, with celebrities dispensing advice on all things from the medical to the psychological 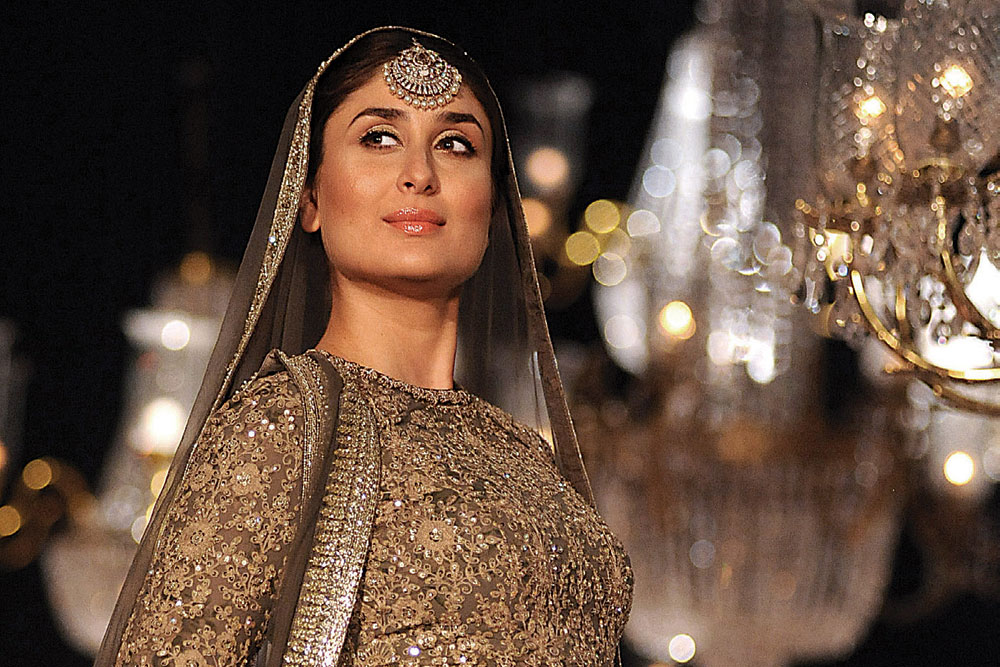 
THIRTY YEARS AGO, when Tina Brown chose to use Annie Leibovitz’s photograph of a heavily pregnant and nearly naked Demi Moore on the cover of Vanity Fair, she started a trend that is still continuing. Since then, it seems like every celeb­rity mother has wanted a Demi Moore cover, and if not that, to at least ensure that the baby bump is as much their statement as is their couture dress. Motherhood, once a rite of passage that even celebrity women endured in private, is now an event to be celebrated, and publicised and monetised.

Result? Nirupa Roy became Kareena Kapoor Khan, probably India’s most famous mum currently, whose children have been stalked by the paparazzi since they were born. Not surprising then the actress should want at least a slice of the Motherhood Inc pie for herself in a new manual-cum-memoir, Kareena Kapoor Khan’s Pregnancy Bible: The Ultimate Manual for Mums-to-Be with Aditi Shah Bhim­jyani (Juggernaut; 392 pages; ₹ 499).


From how to have gentle orgasms to work­ing through the second trimester, from eating 12-inch pepperoni pizzas to writing a book, the reader is told how the actor is like every other mother—except, of course, she is not. She has a loving partner who is supremely supportive, staff to help her, and a mother who was a will­ing pair of helping hands in her first pregnancy and a pair of watchful eyes in the second. She also has access to the best healthcare experts, whether it is her obstetrician, therapist or nutritionist. It takes a village to raise children, we are told; here it is an urban army.

Kareena is not alone in giving advice to mothers-to-be, which encourages them to have it all even if they have to do it all. Tahira Kashyap Khurrana’s recent book is all about the less-known truths of motherhood and is titled The 7 Sins of Being a Mother (Juggernaut; 168 pages; ₹ 299). Tahira, an author and filmmaker, wants us to be shocked at the fact that she doesn’t feel instant love for the child presented to her imme­diately after birth and is humorously disgusted at the idea that her husband drank his protein shake with the breast milk she had pumped and stored in the fridge on holiday in Bangkok. She is trying to normalise motherhood but also the idea that women can have other identities while breastfeed­ing, cleaning poop, handling hormonal changes and usually dealing with absent—even if helpful — husbands. The seven sins, by the way are: sex, guilt, infidelity, submission, tyranny, obscenity, corruption and indiscretion.

Kareena’s and Tahira’s form part of a growing trend of mommy memoirs which propose to reclaim motherhood for mothers. Like Kalki Koechlin’s The Elephant in the Womb: Decla­rations of a Sudden Mother (with Valeriya Polyanychko; Penguin; 256 pages; ₹ 399) which cut through the cultural conditioning that women are subject to and insisted that motherhood has to increasingly become an in­dividual and informed decision for the woman rather than relying on old accepted notions. These memoirs revel in being frank.

Take actor Tisca Chopra who recently wrote a manual for Tara, her eight-year-old daughter, What’s Up With Me? Puberty, Periods, Pimples, People, Problems and More (Red Panda; 96 pages; ₹ 350). The book has practical suggestions for coping with the rollercoaster that growing up is. It has ideas on everything from your changing body to health and hygiene, to safety and self-worth, relationships and emotions, and more. Gynaecologist Dr Mala Arora and psychologist Dr Malvika Varma also weigh in.

YET ARE WE—the mothers-to-be, the mothers and the mothers-who-don’t-want-to-be—getting short-changed? Mother­hood doesn’t come with a manual and each mother’s experience is different. Most moth­ers don’t have the time or energy to know better than just do as they are told, by their doctors, their mothers and their mothers-in-law. I asked a new mother, writer Kanika Dhillon, how she is coping, and she told me quite cheerfully that she is just “free-flowing into the mad amazing chaos”.

And those are the privileged ones. Most women are working in the fields, or on construction sites or simply at home until the very last minute before they give birth in India and are promptly back at work once they’ve delivered the child. When did moth­erhood go from being a natural condition to being a national obsession? When did we start normalising the already normal?

It’s not just about consumerism, though it is that too. As any assiduous viewer of Mother­land, BBC’s hilarious take on school-gate battles and competitive party-giving, will tell you, it can also be a gigantic con. And a lonely one. Eventually, the village disappears, and it’s only you and the baby who remain. However much you may want, biology has made mothers in a way that the umbilical cord is never severed. Guilt is an ever-present sentiment, though some moms are better at hiding that than others. Tahira confronts it head-on in her book: “Mothers are judged for everything. It took me some time, but I finally realised that no one has the power to set boundaries for myself but me.” And so she advises women to not make either their spouse or their child the centre of their universe. She advises society to enable it as well, because if half the universe is unhappy, lonely, under-appreciated and over-worked, it doesn’t serve any purpose. “Every mother is more than just that. Expand your horizons and dream for yourself as well,” she says.

That’s the advice Kareena offers too in her book: “Being a mom was never going to be my only identity,” she writes, even as she dispenses details on all manner of acronyms, from LMP or (Last Menstrual) period to EDD or the Expected Date of Delivery. She’s a great believer in the helping hand. “Everyone needs a little help,” she writes. “Hold their hand whether it be from family or household help.”

MOMMY MEMOIRS ARE not new to India. Karisma Kapoor wrote a book called My Yummy Mummy Guide: From Getting Pregnant to Being a Successful Working Mother and Beyond, published by Penguin in 2013. It shared her workout and diet plans as well as how she transformed into a yummy mummy after her pregnancies. Shilpa Shetty also co-wrote a book called The Great Indian Diet: Busting the Fat Myth, pub­lished by Ebury Press, 2015, which gave a lot of tips on healthy diets that would shape female bodies into socially desired slim sizes. She writes of having gained 32 kg during her preg­nancy and how she shed it.

As Karisma writes in her sister Kareena’s Pregnancy Bible: “I often reprimanded her during both her pregnancies: for work­ing too hard or partying too hard. But her zest and determina­tion for life are inspirational. I have true respect for her. She has been so strong through her pregnancies and has set the bar so high for many women out there.” And that’s part of the prob­lem. Women are already victims of unrealistic expectations of having it all while doing it all—and alone. They don’t need more pressure.

Some celebrity dads have joined the parenting memoir club as well. Karan Johar’s illustrated The Big Thoughts of Little Luv (Juggernaut, 2020) narrated the story of the twins Luv and Kusha, loosely based on his own twins, and tried to showcase diversity by defying stereotypes. He is a single parent who has had his twins by surrogacy and lives in a family where his mother plays the role of his twins’ mom. He speaks of how he believes parenting should acknowledge gender fluid­ity but also keep alive old-fashioned ideas such as good manners and respect for all. He, a single dad, is proud to call himself a mom.

Perhaps, that’s all that we need. Some hu­mour alongside what is an enormous change in women’s lives, something that can both be limiting as well as uplifting. Tahira is funny, as is her book. She writes of her sex drive dur­ing pregnancy: “I was expected to have pure, pious thoughts and was even forwarded a few satsangs and discourses along with medita­tion methods. But inside I felt like Bindu and Helen, the yesteryear vamps who oozed sex appeal. My sin was that not only was I horny but also felt very sexy, despite a baby growing inside me.” She also writes about making mis­takes: “From dropping the kids to school on a public holiday, to giving them the wrong dose of medicine, to putting on the baby diaper the wrong way, to wearing the wrong-coloured T-shirt on sports day and supporting the rival team instead, to missing Zoom birthday parties — my list of blunders is endless. Some things haven’t changed, but one thing has — today I am more forgiving of myself!”

Now if only others followed. Maybe along the lines of Saif Ali Khan’s meaningful epilogue in Kareena’s Pregnancy Bible: “My mother became an actor at sixteen. She did some outstanding work after marriage and kids. My grandmother administered a state in Bhopal, one of the few states ruled by a succession of women. The ladies in my family have shot with guns — and called the shots in more ways than one. So, when I told Kareena she could do it all, I didn’t just mean it flippantly. I had grown up around powerful women and genuinely believed in her.” He adds that his mother was a film star and his father an international sportsman. He grew up watching them divide their time for their children and saw the respect they had for each other’s professions. “My siblings and I were all brought up on their common ground,” he adds. If only it were true for everyone.