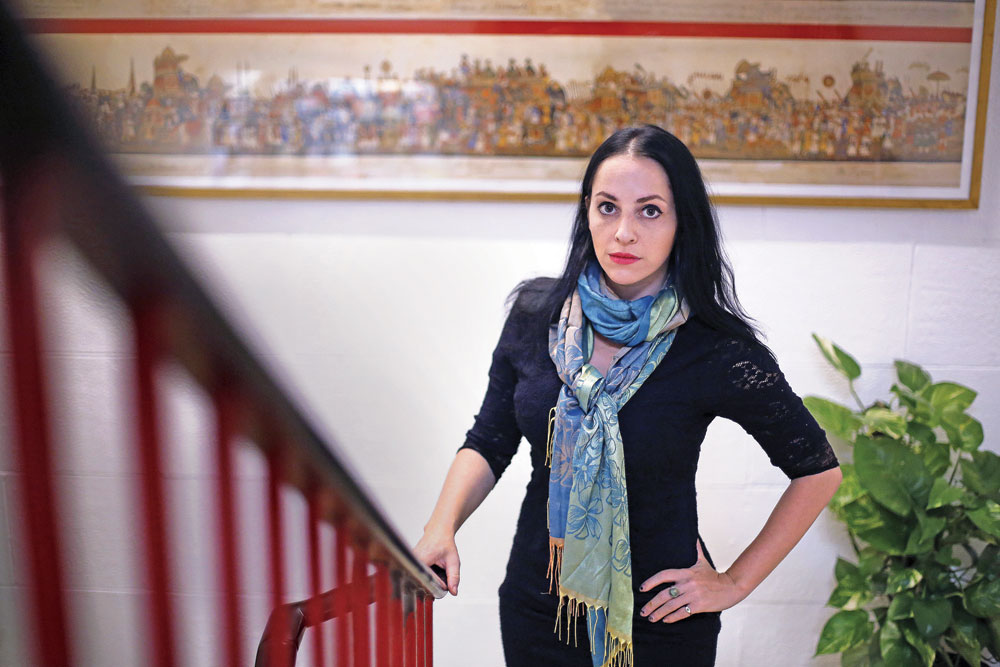 IN THE 2000S, the New York- based illustrator-journalist Molly Crabapple worked briefly as a nude model. She had a certain clarity about it. “I simply wanted to earn more than minimum wage in retail and to be able to get time to focus on my work,” she says. The ‘work’ then was to just draw. It is in the last few years that Crabapple has used her drawing skills, combined with writing, to tell some of the most tragic stories as a journalist.

Drawing is in Crabapple’s blood. Her mother was a book illustrator, a Jew married to a Marxist professor whose roots were in Puerto Rico. About ten years ago, Crabapple became an in-house artist at The Box, a night club in Lower East Side, famous for its burlesque performances. Crabapple remembers the first time she saw the club on the invitation of a performer in one of their revues. “It looked like a Victorian brothel,” she says. It was a place for fun and frolic for the moneyed—from Saudi princes to hedge fund managers. She remembers them coming there night after night, ordering over-priced champagne to show off to each other.

She had earlier worked as a dancer. But in the club, on seeing her drawings, one of its co-founders was impressed and appointed her as the place’s own ‘Toulouse-Lautrec’, a reference to the artist Henri de Toulouse-Lautrec who in 19th century painted scenes at the Moulin Rouge. Every night, Crabapple began to draw—among other things—the audience as pigs snorting cocaine.

But Crabapple also remembers the club for great performances. There were dancers, acrobats, fire-eaters and a “little person” who became her friend. Together, they displayed a certain cruelty towards the audience. “It was class war in the form of a nightclub,” she says.

It was a defining time for her and her art. Among the artists there was a famous anecdote about how in 1890, Edward VII, then Prince of Wales, visited the legendary Parisian cabaret Moulin Rouge, and the popular dancer Louise Weber, popularly known as her stage name of La Goulue, took his hat off with a flying kick.

By the time she started drawing at the club, her name had been Molly Crabapple for six years. Her real name is Jennifer Caban, but a man she knew then gave her this name and it stuck.

The greatest learning from her work at the club was that she learnt to draw fast. Crabapple remembers that it came very handy when later she got a chance to draw at the Guantánamo Bay in 2013. She could quickly capture the changing scene, and distil essentials in a short time. “It was the exact opposite of working in a studio,” she says. But that is not how it was seen by many. “Because in their minds, a nightclub is a feminine space and women are basically trivial,” she says.

When she was eight, Crabapple’s parents got divorced and she moved to Long Island. Childhood meant feeling an acute sense of isolation and cutting school to visit libraries in New York. “I just wanted to get out. I wanted to be done with school, with childhood and come to the big city and make myself,” she says. She insists that she was not an oppressed child, but that even normal parental restrictions and school rules shaped her world view. “It gave me a visceral sense of anger that nobody should be told what to do,” she says.

“I started envying journalists. What were we doing as artists, I thought, sitting in our studios, plagiarising our last most successful work and trying to woo rich people?,” says Molly Crabapple

At seventeen, Crabapple passed high school. She used the money her grandfather had left her around that time to travel to Morocco. A year later, she went to Turkey all the way up to the Syrian border. It was a mad thing to do, she recalls. She fell in love with the Arabic language and Arabesque architecture. “I used my money to take night classes in Arabic till I ran out of money,” she says.

It was also the year when 9/11 happened. That morning Crabapple remembers being at an uptown café. She was just two days short of her 18th birthday. On TV, news of the first plane hitting the tower came in. But she did not think too much of it. She had heard the story of a B-25 Mitchell Bomber plane crashing into the Empire State Building in 1945. “I was thinking, ‘Here comes the new idiot,’ and just then, the second plane hit the towers,” she recounts. She remembers walking downtown to see what had happened. “I walked till I couldn’t walk anymore because there were people from the other side fleeing.” She met a man whom she asked how the towers were and he replied they were gone and then went hysterical. She remembers for days seeing missing-people posters — of men and women who worked at the Wall Street to undocumented people who worked in the restaurant on the top floor of the World Trade Center.

What made her angry, she says, was how the rest of America appropriated what she calls a ‘New York tragedy’. “They look down upon us for a variety of reasons. And then they appropriated our tragedy to justify things which we didn’t want,” she says. The thing at least Crabapple didn’t want was the War, first in Afghanistan and then in Iraq. The Iraq War particularly terrified her. “I thought that the invasion of Iraq will be the end of the world,” she says.

She started spending all her free time going to the anti-war protests. She felt she had limitations. “The Left at least in America can sound very exclusionary in the sense that you don’t deserve a place unless you have read the right kind of books and can put forth the right theory.”

But Crabapple’s moment with journalism came later in 2011, during the Occupy Wall Street protests. She lived close to the site of the protest in Zuccotti Park. It was winter; there weren’t too many places to hang around indoors. So she offered journalists her place to charge their phones, get coffee. “It is then that I started envying them. What were we doing as artists, I thought, sitting in our studios, plagiarising our last most successful work and trying to woo rich people?” she recalls.

Her interactions led her to collaborate with the British journalist Laurie Penny. Together they went to Greece to do a short book which she illustrated. “Seeing her at work gave me lot of education, from how to ask questions to how to find sources,” she says.

Crabapple’s arrest during the Occupy protests in 2012 led to her first writing assignment, from CNN, and from that came a column in Vice. It sent her to report from Guantánamo Bay in 2013. Gradually, she learnt things. A lesson she says she learnt early on was to build expertise if one didn’t have it. “Early in my career, I didn’t have it. So, I worked hard, worked more. So that nobody can say, for example, ‘Hey, what do you know about, say, Syria?’” she says.

“If I had another life and another career, I would like to live in Mumbai. It is one of the coolest cities in the world,” says Molly Crabapple

These experiences resulted in her first book, Drawing Blood.

In 2015, Crabapple struck an online friendship with Marwan Hisham, a young man from Raqqa in Syria, which was the de facto capital of the ISIS. He began sending her photos he took surreptitiously and at massive risk, which she drew from and he wrote captions for. This resulted in three pieces for Vanity Fair. The friendship continued for one-and-a-half years, before the two decided to do a book together. Hisham moved to Turkey, and Crabapple spent the next two years travelling back and forth to Istanbul to work with him.

“IT WAS AN equal collaboration. I wrote half of it and [Hisham] art-directed every single image,” she says. While, in their Vanity Fair pieces, Crabapple had drawn illustrations based on pictures that Hisham had sent, such photos were not available for Brothers of the Gun, (which they co- authored) either because the events took place in Marwan’s childhood, or because they happened at moments like checkpoints when it would have been too risky to take out a camera. So, he would just describe a scene to her or draw a rough sketch himself sometimes. To get the architecture and so on right, he would send her old pictures—for example, of a café owned by his uncle and frequented by ISIS fighters. She also used citizen videos, sometimes creating montages of hundreds of screenshots to produce a single image.

Back in Raqqa, Hisham had taken notes on his phone for a potential book (it would have been too risky to have these notes sitting around on a laptop). “In Istanbul, we would sit together and go through these. I would say what details needed to be filled in, what characters needed to be filled out. What Americans wouldn’t understand. I’d write a chapter, he’d write a chapter. And then he would read what I had written and say, ‘This is clichéd’ or ‘This is.’ And he would rewrite what I had written and then I would rewrite what he had written. Back and forth, maybe six times. That is how we got a fusion. You don’t get that by sitting politely but by fighting,” Crabapple laughs.

She says she learnt a lot from him. “Marwan has a degree inEnglish literature, and he is the sort of guy who translates Beckett into Arabic just for fun. So, he has a literary education I lack in a lot of ways. By the same token, he has never been out of the Middle East,” she says, “and I perhaps helped his story become something Americans could understand.”

Along came Donald Trump. Crabapple says she is still not a targeted group; but she has friends who are suffering immigration problems. “It is important to focus on people who are actually under threat,” she says. In the last few years, she has received her share of online troll abuse. But that is part of the game, she feels. “If I write about Palestine, someone will call me a ‘self-hating Jew’. If I write about the way America is kidnapping children from parents on its border, someone will say that I want to destroy the country.” But she feels it is also important to realise that a lot of the harassment journalists face is done by states; a lot of journalists who cover Syria are abused by Russian bots and employees of Russian state media.

Two books later, Crabapple’s struggle with writing is still alive. “Art comes easy to me the way writing does not,” she smiles.

She has been to India thrice and loves Mumbai. “If I had another life and another career, I would like to live in Mumbai. It is one of the coolest cities in the world,” she says. But she is also aware of India’s “vast amount of problems”. She lists inequality and authoritarianism as two of them. But America and India also have many tendencies in common. “I feel ‘sickular’ will be adopted anytime in America now,” she laughs.