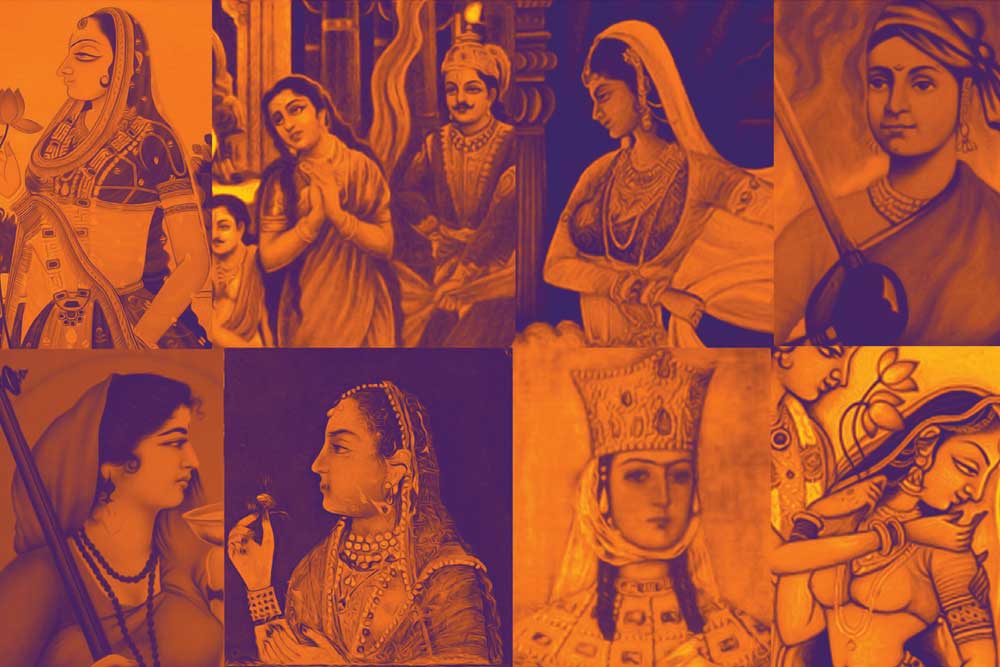 ANY WORK OF collected mini- biographies is bound to have gaps, more names that deserved a place, questions about who was chosen and why. Ira Mukhoty’s Heroines: Powerful Indian Women in Myth and History features eight female historical and mythological figures: Draupadi, Radha, Ambapali, Raziya Sultan, Meerabai, Jahanara, Laxmibai and Hazrat Mahal. The gaps in this highly conventional set of portraits of famous women are larger than most.

Notably, despite an attempt at religious diversity (four Hindus, three Muslims, one Buddhist), Mukhoty’s heroines are strictly north Indian. They largely belong to royalty, or enjoy royal patronage. It is unclear how the author’s stated intent of challenging patriarchal culture by propagating erased female narratives is met, firstly, by choosing a set of protagonists on whom relatively extensive material already exists, as does an impact on the collective psyche. What’s more, most of these heroines’ places in history came from having been the consort, daughter or widow of an influential man. Only Meerabai and Ambapali come close to being complete mavericks.

There is a vexing preoccupation in this book with each woman’s physical appearance (invariably, they all earn tickmarks based on some beauty standard or another). Draupadi’s lotus eyes and dark skin are fetishised; the latter is even suggested as a defence against contemporary fairness creams, losing track of how the deeply complex Draupadi is only admired, never emulated. The male gaze is given importance: Rani Laxmibai’s lawyer John Lang’s flattering appraisal of her figure apparently matters, as does Governor General Canning’s dismissal of her looks. Since little is known of Raziya Sultan’s appearance, the author blatantly objectifies thus: ‘she was ethnically Turkish so it is likely that Raziya had the high cheekbones, wind- blown complexion and almond eyes characteristic of people of the steppes’.

Furthermore, that she was the only female leader of the Delhi Sultanate is true, but Mukhoty’s assertion that she had no contemporaries elides the fact that she ruled for just four years. The 12th century saw other women in power worldwide: including south India’s Rudramadevi of the Kakatiya dynasty. While the author’s research is clear, intellectual rigour is not.

The chapter on Ambapali, the courtesan who became a Buddhist renunciate, is enriched by verses from the Therigatha, an anthology of writing by nuns. Ambapali’s song comparing her aged body to her youthful one ends unequivocally: ‘Such was my body once. Now it is weary and tottering,/ The home of many ills, an old house with flaking plaster./ Not otherwise is the word of the truthful.’ Mukhoty insists however that the nun must have felt ‘relief’ to no longer barter beauty for favour. It’s an odd editorialisation, but keeps with the author’s prudish analysis, hiding behind ‘Buddha’s biographers’, of how ‘a courtesan like Ambapali’ having a religious epiphany was proof that ‘all people can be saved… even the worst of women’.

Mukhoty’s well-honed prose, with fine descriptions of locations, elevates the book from being more than a set of Wikipedia entries, but does little to bring each character to life. A 30-page appendix of references and a bibliographical index indicate thorough research, but demand the question: what does the author have to add to these sources, and indeed to our collective knowledge of these historical and symbolic figures?

Only at one point in Heroines does something vaguely original seem to occur. An expunged anecdote of Meerabai is related, in which a charlatan posing as a devotee says that Krishna has sent him to her for a sexual liaison. The poet agrees guilelessly and begins making a bed on public display, for she feels that if it is the will of her lord, the encounter should be witnessed by all devotees. This subversive apocrypha, more than anything else, challenges patriarchal culture today—which, like Mukhoty, has put these eight individuals on pedestals. More of this, more complexity and less lustre could have turned even these predictable portraits into something befitting their inspiring protagonists.