Kamila Shamsie: The Migrant as a Metaphor

A new novel by Kamila Shamsie explores the process of belonging 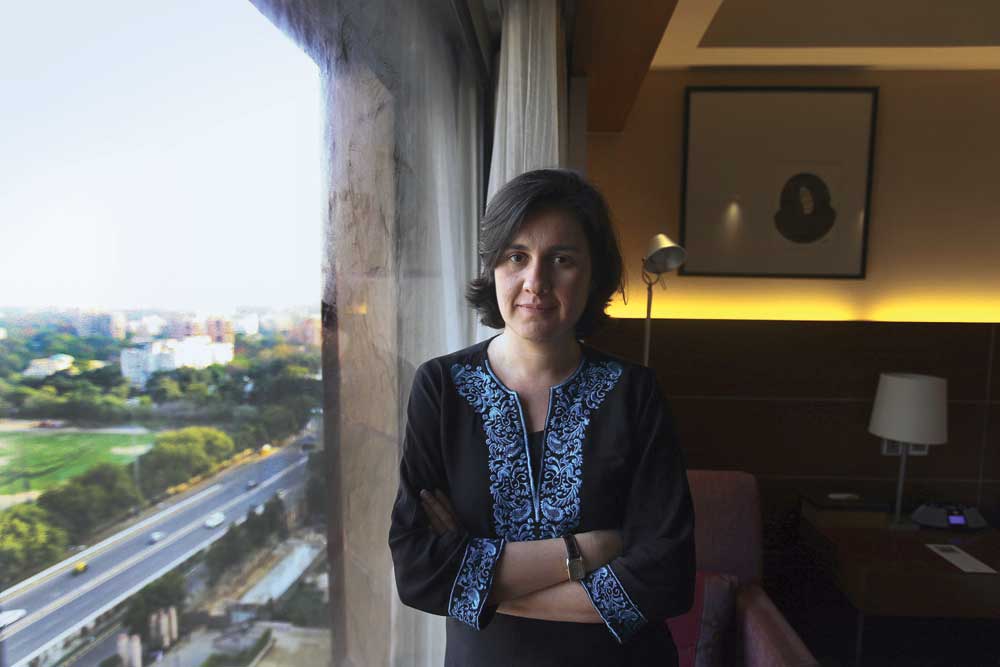 WE TRIFLE WITH the word ‘awe’ these days. Everything is awesome, everything is awe-inspiring. We use it to describe custard, and the Colosseum. But even in the daily deluge of images, at times, we come across moments that do inspire ‘awe’; a feeling of fear and reverence, which could be evoked by a ‘supreme being’. And that superior human being could be the lone protestor. We look at an image of a single man or woman facing off the machinery of the state, and we do feel awe-struck. The individual can be crushed in a jiffy, but for that frozen moment she appears fearless, invincible and better than the herd. The juxtaposition-— shield and gun, tank and baton, against skin and dress, flower and shopping bag—makes the tragic absurdity of war hit home. Kamila Shamsie’s latest novel Home Fire (Bloomsbury; Rs 599; 262 pages) tells us of that moment when that one person defies an entire state and chooses a family member instead. We look upon that lone protestor, the single conscientious objector, with respect, but also horror: ‘My god, what have they brought upon themselves?’

Home Fire, Shamsie’s seventh novel, reimagines the Greek tragedy Antigone by Sophocles. Just as Antigone recounts a sister’s struggle to get her brother a befitting burial, in defiance of the king’s diktats, Home Fire is also the story of three siblings, and Aneeka’s mission to do right by her brother Parvaiz. Shamsie first encountered Antigone while studying at university, but was not moved by the play. She preferred Homer’s epics to the Greek tragedies at that time. A few years ago, she re-read it on the suggestion of Jatinder Varma, artistic director of Tara Arts, London, who believed it could be adapted to our contemporary times. Re-reading it, she immediately realised he was right. She says in an email interview, ‘The power with which that play looks at the consequences when one person stands up to an unjust state seemed to speak directly to our times, and to all times.’

Antigone has been adapted and retold through the ages because its crux, the right of the family (honouring its kin) against the rights of the state (punishing traitors) remains forever relevant. The pitting of two absolute rights has been frequently used by artistes as a response to an authoritarian state. German theatre director and playwright Bertolt Brecht adapted the Greek tragedy in 1948, to reflect on the resistance to Nazism. Closer home, Ratan Thiyam adapted Antigone in the late 80s to address the political failures in his home state of Manipur.

Tragic plays are said to have served many purposes in ancient Greece, one of them being ‘catharsis’. Which Aristotle described as, ‘The purging of the emotions of pity and fear that are aroused in the viewer of a tragedy.’ What role does fiction play today? Shamsie replies, ‘Sometimes fiction makes us feel less alone in the world, sometimes it makes us understand other people’s pain, sometimes it makes us look at things we knew from a new angle, sometimes it connects us more deeply to the world we’re living in. Sometimes it takes us out of the world we’re living in.’

In Home Fire, readers are immersed in the relationships of siblings. Isma, the nine-year-old, had helped her mother and grandmother tend to the sickly twins Aneeka and Parvaiz. When their mother dies, 12 years later, Isma must shun her grief and shoulder the responsibility of raising the twins. Over time, the twins become each other’s confidants and anchors, and Isma is slowly relegated to the position of an outsider. Parvaiz and his life choices become the bone of contention between the two sisters. The identities of the three siblings are inherently woven with each other, where they often seem like ‘parts’ rather than ‘wholes’. Shamsie confesses that she imagined Aneeka first as a ‘sister to her sister’. She says, ‘Aneeka is the younger one, more headstrong, more selfish, but also more willing to act rather than accept what comes her way. And she’s so consumed by the loss of her brother, she can barely see anything else.’

Sometimes fiction makes us feel less alone in the world, sometimes it makes us understand other people’s pain. Sometimes it takes us out of the world we’re living in

The 19-year-old law-student sister Aneeka ‘who knew everything about her rights and nothing about the fragility of her place in the world’ is the kind of character readers will root for, even if she does not seem credible at all times. Her father who had fought alongside the Taliban had died (probably tortured) on the way to Guantanamo. He could never get a proper burial. She will not allow the same fate to befall her beloved brother. If she has one failing, it is that she loves too much. As her fiancé Eamonn says while rising to Aneeka’s defence against his father the Home Secretary, ‘Is Britain really a nation that turns people into figures of hate because they love unconditionally? Unconditionally but not uncritically. While her brother (Parvaiz) was alive that love was turned towards convincing him to return home; now he’s dead it’s turned to convincing the government to return his body home. Where is the crime in this?’

Home Fire delves into ideas of nationhood and identity. It raises questions about how the worst death can befall those whose ‘only crime’ is the nation they are born into. Shamsie says, ‘I think individuals are always bound up with the history, politics and prejudices of the nation in which they’re living—that is more significant than the nations to which they’re a citizen, though the rights of citizenship can also play a role in people’s lives.’ But finally, Home Fire is a love story. A love story of two beloveds. A filial story of two siblings.

FORTY-FOUR-YEAR old Shamsie has written on various subjects from cultural appropriation to politics in Pakistan to women such as Malala Yousafzai and Sabeen Mahmud. She has even spurred ‘provocations’ such as making 2018 the Year of Publishing Women. In April this year, she wrote in Dawn about the fate of migrants and Muslims in post-Brexit Britain. ‘It’s the idea of The Migrant that people hate and fear more than the reality of it. If there is any hope, it’s in that,’ she wrote.

When the Man Booker longlist was announced in late July, Shamsie (who is on the list with Arundhati Roy, for Ministry of Utmost Happiness; and Mohsin Hamid, for Exit West) tweeted ‘Journos: Mohsin and I are both Pak/UK dual nationals as the #ManBooker 2017 press release says. No need to change it to Pak born/Pak origin.’ She explains why she needed to make that distinction. ‘The context is important here. The coverage of the longlist identified people by their nation—so it said, there are four Americans, four British writers, and two writers of Pakistani origin. The implication being that somehow, rather than being citizens of two nations, we were citizens of none. The correct way of reporting would have been to say, ‘There are six British writers, two of whom are dual nationals of Pakistan.’ But clearly, something about dual nationals makes people uneasy, as if by belonging to both, we belong to neither. Which isn’t at all how I see it.’

In Britain, extremist sentiment is connected to the scapegoating of migrants, while governments who are dismantling the welfare state escape responsibility

For Shamsie, this belonging to both Pakistan and the UK, and not being identified either less or more with one or the other, is of crucial importance. She grew up in Karachi and has spent nearly a decade in the UK. To her, Karachi is ‘multi-ethnic city of migrants’ and London is still ‘one of the great cities of the world, a place which shows how it is possible for people of all kinds to live together, and mostly get it right.’

Home Fire explores the act of migration and the process of belonging. The novel opens in an airport, an everyday place of transit that has now become the state’s arm of surveillance. If you look a certain way, dress in a particular fashion and flash a genre of surnames, then the airport becomes a hub of dread. Isma a doctorate student of sociology, finds herself interrogated for two hours at the airport. The man in the interrogation room asks her, ‘Do you consider yourself British?’ ‘I am British,’ she replies. ‘But do you consider yourself British?’ he persists. To which she replies, ‘I’ve lived here all my life.’ Isma has to prove her Britishness to a stranger who thinks her true proclivities will be revealed if she slips up on a question about the Queen or the Great British Bake Off. In Amherst, Isma befriends Eamonn and together they explore the city. When he asks her, ‘… it must be difficult to be Muslim in the world these days.’ She replies, ‘I’d find it more difficult to not be Muslim.’

The resurfacing of a certain brand of suspicion, which can take the form of insidious questions and can also burgeon into a xenophobic nationalism cannot be swept under the carpet. Authors and historians have sought to explain this rise of extremist sentiment. How does Shamsie explain this rise? She says, ‘In Britain, it’s certainly been connected to the scapegoating of migrants, who are blamed for various of society’s ills while governments who are dismantling the welfare state escape responsibility. Of course, it’s always in times of an economic downturn that such scapegoating becomes more pronounced—people want someone to blame for the things they lack, and it’s easiest to blame those who are seen as outsiders.’

A few weeks after Brexit, one night in London, when Shamsie was walking to a bus stop, a man who she describes in an article as ‘white, young, Londoner by accent,’ cussed at her and yelled, ‘Go back where you came from.’ Taken aback, but not threatened, the question she wanted to ask him, but didn’t, was, ‘And where do you think that is?’ It was the first time she’d experienced such hostility in her city and it forced her to reckon with a ‘rightward shift’ and a ‘hardening of rules and attitudes towards migrants.’