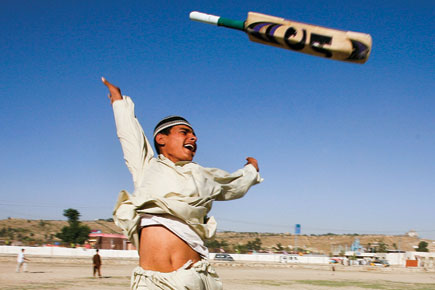 
The story of cricket in Afghanistan is a fascinating account of the power of modern sport in giving new meaning to life. From playing with sticks and plastic bags that passed off as bats and cricket balls on the streets of Kabul, to taking on India at St Lucia at the world T20 in the Caribbean within just five years, Afghanistan’s rise to the top has been phenomenal. And it can’t simply be attributed to talent. A deep-seated desire to combat the challenges life has presented them with, including death at every corner and a kind of resilience that has little parallel, has seen them rise from the 90th position in world cricket in 2001 to 14th at the start of 2011. Set against the backdrop of war-ravaged Afghanistan—where cricket flourishes amidst all odds—Out of the Ashes isn’t simply a book about cricket. It is, as Mike Atherton rightly says in his foreword, ‘more than just about sport’.

It is a story of wanting something very badly—Taj Malik and Allah Dad Noori were both determined to make sure that cricket took root in Afghanistan. While their methods were different, their dream was the same. And they did fulfill their dream. It is only natural then that this is a story of politics and intrigue as well—no sport can escape this. But the important thing is that both of them never lost sight of their goal, and even the men who joined them along the way continued to be part of the dream till the very end.

From living in a hotel that had only a communal toilet and torn mattresses, to enjoying five-star comforts in St Lucia, it has been quite a journey for the team. And seeing bikini-clad Western women lounging next to swimming pools and women physiotherapists getting male players ready for play has only added to the excitement of the journey. ‘Exhibition of flesh’, as Albone describes it, continues to be alien in Afghan society, and the shock and awe the players felt when first exposed to such ‘improper’ acts helps drive home their provincial origins. It helps one better understand the sudden change to skin-tight T-shirts and oversized sunglasses and the effort put in by Kabir Khan’s boys (the coach who took the team to the verge of qualification in World Cup 2011 and to qualification in the 2010 World T-20 in the Caribbean) and appreciate the scale of their achievement.

Albone’s story gains much from his access backstage—he travelled with the team for a good five years and was a constant presence in the dressing room. It is a first-hand account, not a product of hearsay, and is honest, candid and even critical.

More than the road to qualification, it is the start of the journey that is the best part of this book. Albone includes fascinating tidbits such as the fact that their start-up equipment provided by the MCC and other English counties was delivered by jet planes meant to carry army equipment and relief.

The only criticism I have of this book is its slight bias towards Taj Malik. This is perhaps natural, since Malik was instrumental in giving Albone backstage access. There are occasions where Albone is biased towards Malik and against Allah Dad Noori, both of whom rightly claim the position of ‘Father of Afghanistan Cricket’ for their services to the game in the country. Malik wins the title in Albone’s account, perhaps as a result of the proximity between the two.

Out of the Ashes has a feel-good air to it since it concludes with a feeling of hope that no barrier is ever insurmountable. It proves that not only in cinema, in real life too, a journey from the miseries of poverty to the glitz and glamour of stardom is possible if you have the vision and zeal to work hard. It also instills belief in the clichéd and much abused principle of ‘natural justice’.