Journeys on a motorbike, a bicycle and on foot celebrate solitude and freedom 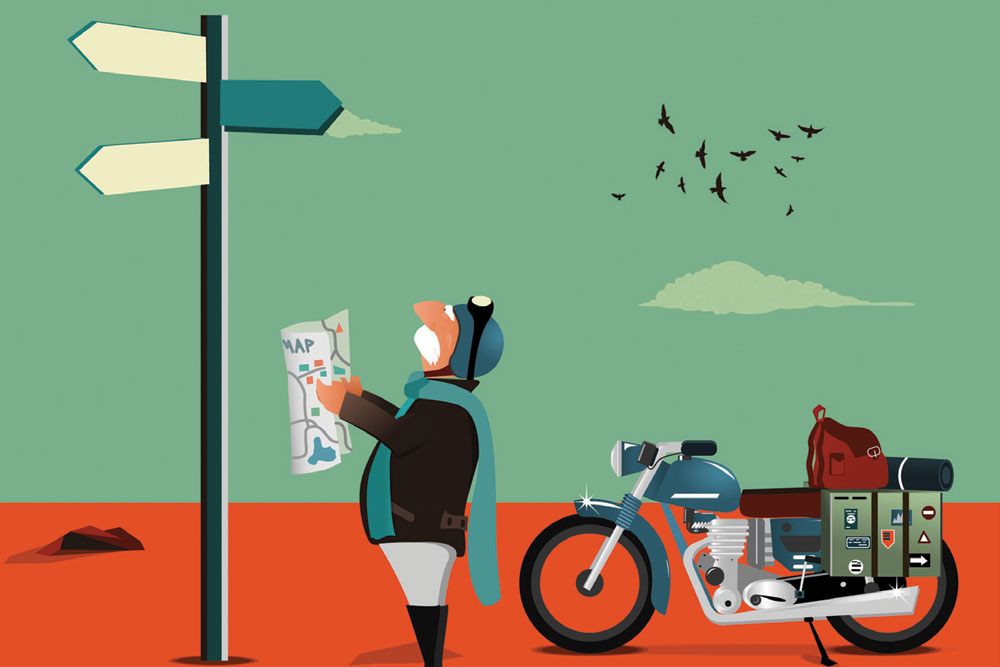 
THREE MEN SET off on their journeys at different moments in their lives. Their mode of transport is as different as their purpose. But all three are united in their thirst for an adventure into the unknown. And the fact that they write about it.

In the early 1970s, Michael R Whittle made his way to Western Australia from his hometown of Leyland in Lancashire, England. One of the world’s biggest iron ore regions at the time, Pilbara promised to be a reward after the toil in the relentless heat. Lathered in russet dust through most of the day, Whittle found the only respite came in the form of chilled beers and a nearby library, where he retired to read books about explorers and their escapades. And after six years of the grind, he set off on one of his own adventure, which he captures in the book, The Mongoose and the Eagle’s Claw: A Journey by Boot and Bike from Nepal to England (Book Guild; 300 pages; `1,383).

After trudging along the slopes leading to the base camp of Mt Everest for six glorious weeks, Whittle returned to Kathmandu. This was 1980 and though it was past its heyday, Nepal’s capital still resembled a hippie paradise. On his arrival in Delhi, he made an impulsive purchase, and what he now owned was a trusted steed in a Royal Enfield motorcycle. He set off on a few rides in the north of India, where he also encountered the feisty mongoose who earns a mention in the book title. He was now in sync with the 350cc that thumped under him. It was time to embark on a ride that started on the Grand Trunk Road and would lead him into the heart of unrest.

It was the time of the Cultural Revolution in Iran. A few hundred kilometres away from where Whittle landed up, the US had launched Operation Eagle Claw—the second part of the book title—to end a hostage crisis. The Iranian authorities were now in search of friends of America. Everywhere he went, the uncertainty was palpable and before he realised it, the thrill of riding free through unknown terrain had transformed into a desperate fight for survival. There was just one goal here on—to exit Iran as soon as possible.

The moment he entered the country, Whittle got caught in a student protest and just about escaped a tear-gas attack. A few days later, he was surrounded by armed guards and escorted to the nearest police station. The final hurdle came at the Turkish border where he encountered greedy customs officials. When he had his chance, he made his great escape on a prayer and under the noses of armed guards.

On the other hand, Anindya Mukherjee had better luck with uniformed men, who helped him each time he needed it. Sahara Soliloquies: Across the Sahara on a Bicycle (self-published; 77 pages; `299) captures his bicycle ride from Morocco to Senegal, a distance of 2,025 km through the Sahara Desert in west Africa. A mountaineer at heart, he was inspired by his idol, the English climber HW Tilman, who cycled along the equator from Uganda to Cameroon in the early 1930s. After four visits to Africa, Mukherjee was familiar with its charms, especially what he had experienced in the remote villages. By 2017, the stage was set for his 23-day cycling expedition.

If buying time for the ride and gathering funds was a challenge, handling the vagaries of consulate officials led to even bigger problems. On two occasions, he had his passport returned to him with incorrect visa dates. Just when he thought he had his itinerary set, alongside all the logistics necessary for a self-supported ride, he had to contend with deadlines to exit each country and avoid overstaying his welcome.

There were moments when he encountered isolated patches of immense vastness and torrid sandstorms that brought his progress to a halt. The ride also had to be planned keeping in mind how far he was from civilisation. It meant embracing the effort of pedalling 100 km on average each day. Survival depended on it, which started with sourcing water for en route there was simply none.

In Western Sahara, Mukherjee came across compassionate strangers who opened up their doors and hearts to him. This included armed personnel, who would escort him to a shelter for the night and celebrate the fact that he was from the land of Shah Rukh Khan.

Then, there were other times when he found the going rough, simply on the basis of the colour of his skin. On entering Mauritania, he was welcomed by rude shopkeepers, a contrast to the goodness he had experienced until then. The sight of children relieved him, albeit momentarily, his genial smile was met with a barrage of stones that were hurled at him until he was out of reach. But for a mountaineer, hardships are all a part of the game and by the end of his journey, Mukherjee simply longed for his next adventure.

While time was a constraint for Mukherjee, Robert Martineau had plenty at his disposal on his own visit to West Africa. The desk job at a law firm in London was uninspiring. He had found momentary solace in running, yet what he needed most was to disconnect, get out of his comfort zone and shake off the rust.

The first few steps of a long walk were taken on a Christmas Eve, when he quit his job. It was time to set out on a pilgrimage to rediscover his soul. His research took him to the Bight of Benin, where he traced out a route that arched from Accra in Ghana to Dapaong in Togo, before ending at Ouidah along the coast of Benin. He relives the experiences that he gathered over six months and over 1,000 km in Waypoints: A Journey on Foot (Jonathan Cape; 272 pages; `1,728).

At the start of his journey, Martineau navigated jungle tracks to Kumasi in Ghana, the last big city for the next few months where he stocked up on basic supplies. It took him a while to acclimatise to his heavy backpack, besides coming to terms with the dusty tracks and stifling heat as the sun rose. At the end of each day, he would look for a place to pitch his tent and rely on the generosity of the locals he met along the way. There were other evenings when he was far from civilisation, soaking in the wonders of the wilderness around him. He would rise before dawn to make the most of the cool air, before the searing heat made it a suffer-fest while he endured the remaining distance. The respite came in many forms and, at times, simply at the sight of another human presence.

Robert Martineau would look for a place to pitch his tent and rely on the generosity of the locals he met. At other times, he soaked in the wonders of the wilderness around him

The terrain dried up, as did the details on his map as he moved north towards Tamale. He was soon walking alongside the Fulani herders, wild and free, a romantic idea that he had explored while planning the trip in London. But this was all very different. There were days he battled the monotony, the fatigue and hardships, and a dread about what might lie in store the next morning. On his approach to Dapaong, he collapsed in exhaustion. But after a few days of rest, he was ready to push on again. The Atakora mountains brought momentary relief, before he turned south on the final leg towards the Benin coast.

At times, he gave himself the leeway to soak in the local culture. He stayed back in Kumasi to be part of the festivities of Adae where the locals celebrated their ancestors. In Dassa-Zoumé, he climbed to a hilltop shrine alongside many others to experience a pilgrimage, quite unlike his own. As he progressed through the many miles, Martineau gradually gained an understanding of what his endeavour really meant.

Alongside his own journey, Martineau relives the tales of explorers, researchers and scientists, and the discoveries they had made during their wanderings. He reflects on the experiences of others who had encountered solitude like him, the polar adventurer Richard Byrd and the incarcerated medical doctor Edith Bone.

Each book has its own shortcomings. Whittle spends numerous pages on accounts from the First World War during his time in Turkey, before getting on with the rest of his journey across

Europe and back home. Mukherjee could have added more depth to his travelogue in what are mere notes from his diary that he scribbled en route. And while Martineau’s narration is engaging, the frequent diversions to historical events and other moments from his life are often an unnecessary distraction. However, these three accounts spark dreams of long and difficult journeys on roads less travelled. And they are testament to man’s can-do spirit against all odds. These three adventurers remind us that there’s always a story to tell at the end of the road.