Finally, non-Punjabi readers can feel the anguish in the poems of Lal Singh Dil, a Naxalite poet from Punjab 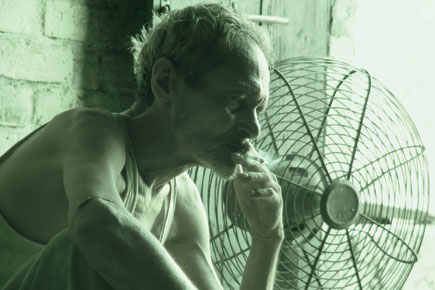 Finally, non-Punjabi readers can feel the anguish in the poems of Lal Singh Dil, a Naxalite poet from Punjab

One evening in 2006, my friend, filmmaker Ajay Bhardwaj, rang up. “I am driving down to Samrala tomorrow. Do you want to come along?” he asked. I immediately said ‘yes’. I didn’t need to ask him why he was going there. I knew it could only be to meet Lal Singh Dil.

Later that searing afternoon, in his small brick dwelling, I finally met the person I had earlier encountered in Ajay’s multi-layered film on Punjab, Kitte mil ve mahi (‘Where the twain shall meet’). Dil sat on a string cot in the middle of the room. In one corner, I saw a few dirty cups and two kettles. An old, rusted iron trunk lay in another. Numerous mementoes lay haphazardly on a cement slab, their plastic covers intact. Half hidden behind them was a poster of Bhagat Singh.

The floor around Dil was strewn with beedis and burnt matchsticks. He was drunk. Before him lay open a foolscap note book on which he was writing a long poem. “It is already 78 pages,” he mumbled. It would be published in 2009, about two years after his death, a 100-page poem titled Billa aj phir aaya (Billa visited again today). But that afternoon, Ajay loaded a DVD of his film on my laptop and Lal Singh Dil saw himself on screen for the first time. He got emotional, held Ajay’s hand tightly and started weeping silently.

Five years after his death, his old friend, poet-journalist Nirupama Dutt, has come out with an English translation of his short memoir and some of his poems. Poet of the Revolution, which also features an introduction by Nirupama, brings for the first time to non-Punjabi readers the pain and anguish of Lal Singh Dil.

Dil was born in 1943 to a Chamar (tanner) family in a village near Samrala, also the birthplace of the legendary Urdu writer Saadat Hasan Manto. The family was landless, and had no access to either money or education. Dil was the first in his clan to pass tenth standard and then go to college, the fees for which his mother arranged by selling off her earrings.

From a very early age, Dil was witness to the oppressiveness of a caste-ridden society. While in college, he started giving tuitions to a girl from a higher caste. At her home, he was usually given tea in a brass tumbler. Once, after he had finished the day’s lesson, he saw his student’s mother pick up his tumbler with a pair of tongs and throw it into the stove to purify it by fire. “I felt ashamed and affronted, while the clatter of the tumbler being thrown about echoed in my ears,” he said, recounting that incident.

Dil was also lonely and lovelorn throughout his life, and this became a part of his persona and poetry. As these lines so ably tell us:

Forlorn, I contemplate / a single thought: / that your oiled hair / would bring me salvation.

In the late 1960s, after the Naxalite rebellion broke out in West Bengal, its fire spread swiftly to other parts of India, including Punjab. By this time, Dil was reading out his poems at a few events, but he was also in penury. In order to earn his bread, he would work as a daily wage labourer. He got influenced by Naxalbari, and soon started pasting revolutionary posters on the town walls. Later, he took part in an attack on a police station and was arrested shortly afterwards.

For the next nine months, Dil was tortured by the police, particularly by an upper-caste Jat police officer. Dil, the revolutionary, refused to tell him the name of his village. “He won’t tell the name of his village, this bloody Chamar!” the officer raged. As Dil writes in his memoirs: ‘I would often hear these familiar words from the mouth of a new policeman, “So you bloody Chamars, you want our land?” And the brutalities would follow.’ After serving in prison for three years, Dil escaped to Uttar Pradesh, where he worked as a farm labourer. The night he reached there, he was walking by a railway line when thorns pricked and bloodied his feet. But Dil was in some sort of trance. He walked unfazed, singing this tarana of Faiz: ‘Badahte bhi chalo, katate bhi chalo.’

Nirupama’s association with Dil began in the 1970s, when she translated two of his poems for an anthology of Naxalite poetry. At that time, as Nirupama writes, Dil had been hailed as a major Punjabi poet of the Naxalite movement. ‘Then he seemed to have disappeared,’ she writes, ‘as quickly as the spring thunder.’ It was almost 20 years later in the 1990s that Nirupama finally met the poet by chance at a

In Uttar Pradesh, Dil had converted to Islam. On returning to his hometown years later, in 1990, he opened a tea shack. Here, he smoked, drank, made tea and wrote poetry. He also got truck drivers who frequented his tea stall to write lines of poetry instead of jokes and curses on the back of their vehicles. But he still longed for love, as is evident from the way he treated Nirupama, gifting her small tokens of love: a notebook, a cigarette lighter.

In Dil’s lifetime, three collections of his poetry were published: Satluj di Hava (1971), Bahut Saare Suraj (1982) and Naaglok (1998), followed by his memoirs, Dastaan. His poems are essentially flashes of his personal history. In Caste, Dil writes:

You love me, do you? / Even though you belong / to another caste. / But do you know, / Our elders do not / even cremate their dead / at the same place.

In For Us, the poet writes:

Dil longed for love till the very end. In the hospital, as a friend of Dil’s told Nirupama later, “A day before he passed away, he said he wanted to face the side where he could see the nurses come and go.” And then he died. As he had written on the back of a truck years ago: ‘Koonjan udd jaana’. The birds will fly away.